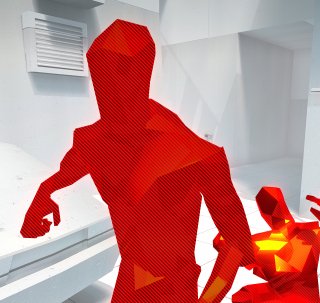 First impressions on that game everyone says they beat in 2 hours? Yup!

Sure, I’ve already finished what you might call the “story mode” for SUPERHOT, but I feel like there’s much more to chew on with this one, so I thought I’d check in with my impressions first. I’m not going to give it all away or spoil anything today (and trust me, there’s some neat stuff you won’t want spoiled) so read on with nary a worry.

Right out of the gate SUPERHOT left a strong impression on me. The original prototype for SUPERHOT was built for the week-long 7DFPS GameJam in 2013. Despite playing that prototype a dozen times prior, the full version feels like a whole new game – not just a fresh coat of paint. The game immediately drops you into the POV of an unnamed player who, through one means or another, has come across a new game called SUPERHOT.exe. It  never outright tells you, but you’ll quickly discern this and more from the game’s main menu, which looks and functions much like an old DOS ASCII menu system complete with links to a fake IRC chat with other “hackers” talking about all sorts of things. It’s engrossing, especially for someone like myself who remembers using PCs that chirped every time they loaded something new.

It also isn’t just another FPS game. While you will spend the entirety of your time shooting, slicing, punching, and clobbering Red Dudes it’s more of a puzzle game solved through trial and error. In SUPERHOT, time only moves when you do, so every turn or step you take moves things forward just a little bit, and that includes the bullets slowly careening towards your end. While there are other features unlocked later on, it’s how you decide to shoot or dodge your way out of the various situations you’re dropped into that will help you survive each level. Sure, you could rush around the office swarming with Red Dudes like Neo but you’ll suffer a frustrating death more often than not. You’ll need to think your way out of these gauntlets.

The core levels are topped off with a replay of the carnage at full speed while an announcer flatly drones out the words “SUPER” and “HOT” repeatedly. Yes, that’s right: a replay. In a clever addition to the single-player-only title, SUPERHOT boasts a replay system where you can upload your murder sprees to a site called Killstagram (check out my best replay here). I’ve yet to master the tweaking of replays, but there are options to freeze and slow down time apparently, so there’s a bit of a learning curve to it if you want to make a flashy replay.

My time with SUPERHOT has been a blast so far, and I can’t wait to tell you all about it after I’ve put a few more hours into it.

Matt Kondracki is Senior Editor, News for AYBOnline.com. His opinions are his own.