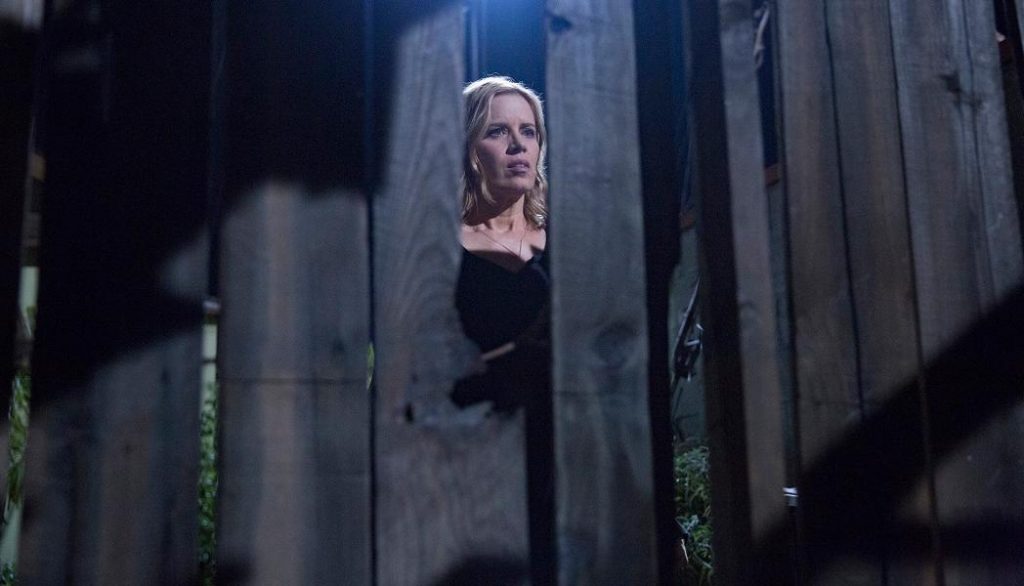 What an opener to Fear the Walking Dead this week. 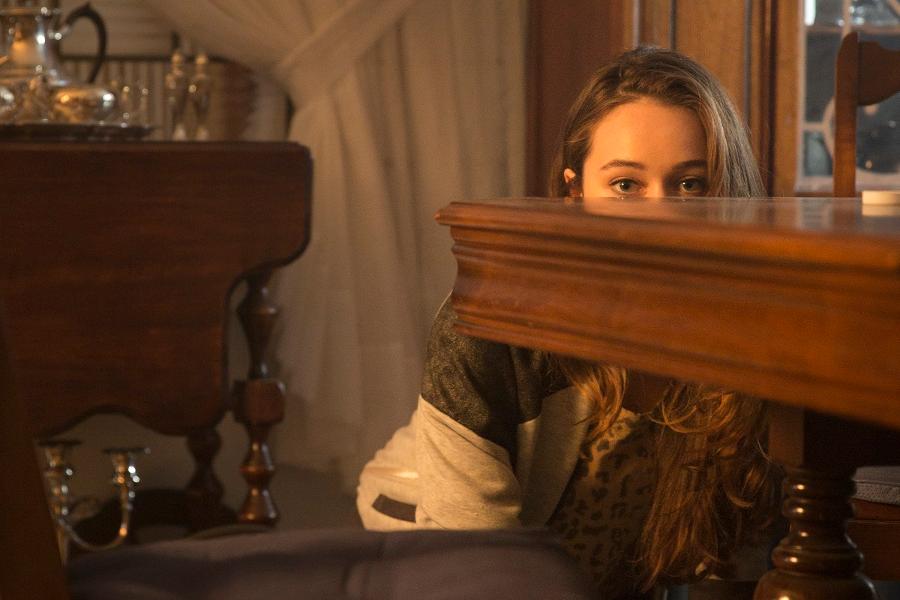 Fear is hitting the usual snags, but this week’s opening was definitely not one of them. Picking up where we left off last week, with Travis’ family and the Salazars trapped in their downtown Los Angeles barbershop during a riot, we actually get to see things go to hell. Cars are flipped, windows are smashed, and next door a shop is looted. It’s intense and a welcome change from the strangely low-budget approach last week. A zombie even pops up in front of Chris while he looks out a window. This doesn’t really make any sense, since Walking Dead‘s zombies can’t see and it definitely can’t hear the kid over the riot outside, but logic be damned, the hooded zombie is eye-fucking the camera anyway.

But we can’t spend the entire episode here, so naturally the group is forced out when rioters set fire next door and smoke them out. The group sees the riot in full swing and Travis’ son Chris catches an eyeful of a zombie ripping the neck out of a lone riot cop. Nobody else notices (not even Travis who pulls him away), so the group moves along with their escape through the plaza. It’s hard not to see the next bit coming as Daniel and Griselda Salazar take a detour through a rickety scaffold, but things go awry as a fire truck knocks it over, breaking Griselda’s foot. Somehow, despite the total chaos and destruction, Travis’ truck is not only still in the spot they left it but also completely untouched or stolen. Come on.

After their escape from downtown in their riot proof truck, they make a break for the hospital. Things are worse there, and aside from that annoying high-pitched tone they play to build suspense, there’s some great atmosphere building. The hospital is totally surrounded by cops, SWAT, scared civilians, and a blink-and-you’ll-miss-it zombie doctor shambling along. As the truck’s radio drones on about the state of emergency in eleven states, the SWAT team unloads into a lone zombie. It looks cool but feels cheap because, like I mentioned last week, for a space that is supposed to be in chaos there really isn’t much going on. There’s maybe a dozen civilians plus a handful of police in this scene and a little smoke coming off the roof of the hospital. Not much, for a hospital that is supposedly surrounded. They pull away into the hills to see rolling blackouts hit the city.

Switching back to Madison and the kids, we see her still struggling with what’s happening outside, then roping Alicia and Nick into some Monopoly. It’s nice to see Alicia get some lines in here that touch on her relationship with her brother Nick; she’s still bitter over Nick’s abandonment of the family. Gun shots cut off their game before things get too real between the siblings, and Nick discovers a wandering German Shepherd at the back door. We can’t have nice things in this world, though, so as soon as the dog arrives, so does their zombified neighbour Peter who has presumably finished eating Madison’s friend across the street. Madison and Nick are on top of things and run next door to grab a gun… and they leave the back door wide open. Yep. For some reason, despite the threat outside, they leave the freaked-out dog alone in the house with a wide open door.

Crossing into their neighbours’ yard, they make their way through a vine maze (the show gets a lot of traction out of this thing) to the back door. There’s a nice touch here when Madison lectures Nick over knowing exactly how to break into the home: he finds their spare key immediately. It’s not long before they find the shotgun, the lights go out, and the barking dog finds zombie Peter wandering into the open back door (surprise!). Travis and company pull up in the truck as the dog is mauled off-screen. Madison brilliantly tries to use her phone that failed to make calls just a short time ago to stop Travis from going inside. No time for opening a window tonight! Madison, Nick, and Alicia make their way back through the maze to stop Travis who, inexplicably, is totally okay with approaching Peter who is clearly eating a fucking dog. Alicia runs back for ammo when the power flicks back on to reveal a cool shot of zombie neighbour Suzanne behind some old saloon doors. She books it out of the house while Travis struggles to avoid being bit by Peter, and somehow zombie Suzanne catches up with Alicia in the maze for a good ole spooky-grab-and-hair-pull. The ensuing fight with Daniel Salazar stepping up to blow away Pat is great, and has all the subtlety of a air horn to show us who is going to survive Los Angeles (hint: it’s not Travis).

With zombie Suzanne trapped in the fence, things settle down enough for our new group to come to terms with things. The Salazars start doing the math of surviving with nice people and how it doesn’t work out in Travis’ favour. Alicia starts to accept her boyfriend is dead. Travis refuses to come to terms with the new dangers and insists on “no guns,” even after his brush with death. Liza drops some hard truths about Griselda’s severely broken foot to Travis. Madison goes as far as telling Liza to put her down if she ever turns so Travis won’t because “it’ll break him”. Madison and Daniel come away as the show’s go-to people here, as Daniel moves about the house judging weakness in people, and Madison accepts that Suzanne is truly dead, almost working up the nerve to put her down herself. Before Madison and Travis’ families pack up their cars in the morning, the show is practically beating us over the head so we know things are changing for the worse. Daniel even goes as far as to tell his daughter Ofelia that “good people are the first ones to die,” in case you haven’t got the hint.

Leaving the Salazars at the home, Madison and Travis’ families pull away for the desert only to find Suzanne’s still-alive husband coming home. Madison pulls over to stop him, but he makes his way to the vine maze (the real star of the episode is his gardening) before she does and sees his zombie wife. Suzanne goes in for a bite, but before she can get a piece, the National Guard pop out of literally nowhere (how did they sneak up that empty street Madison was on?) and put her down. Next thing we know the California Guard are marking Madison’s friend’s house with the FEMA markings for dead and taking stock. She lies to them about coming into contact with the infected in her backyard, since they somehow can’t see Peter’s brains all over her back door. It closes out with Travis believing help has finally arrived but Daniel echoing the audience’s thoughts and telling his wife, “It’s already too late.”

It’s good to see things improving, but it’s a bummer to see the same problems dog the show again. Travis approaching zombie Peter is too much. That’s insane. Everyone knows it’s insane, nobody would do that. Suzanne somehow catching up with Alicia in the maze was goofy in a ’70s-horror sort of way. The pop-up zombie in front of Chris is just absurd.

It’s these things that keep the show from being great. I don’t see them changing, since sticking to their world’s logic has been a problem ever since AMC fired Frank Darabont several years ago. They’ll likely continue; the writers here cut corners for cheap scares and thrills. See you all next week when the military sorts everything out thanks to their resident commander, who totally isn’t a psychopath. 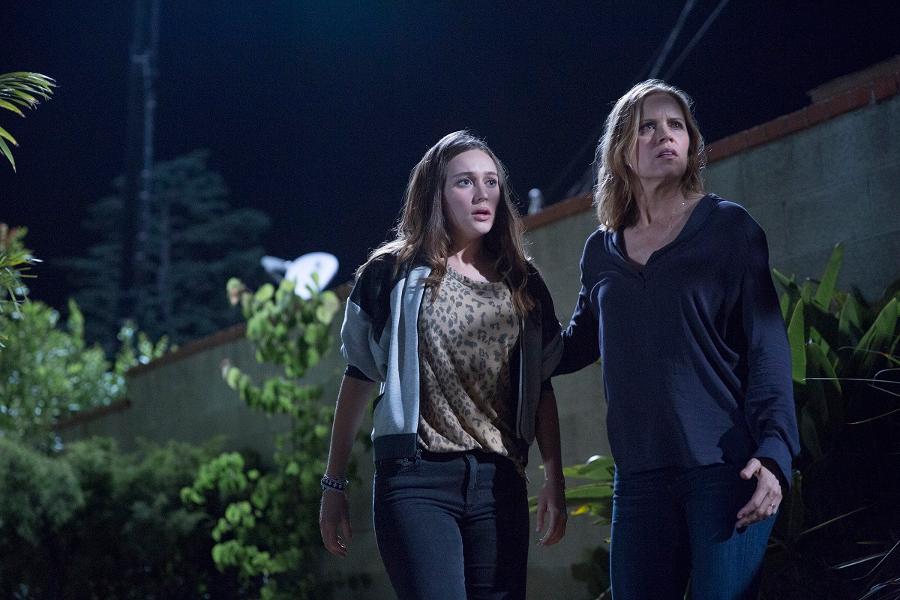