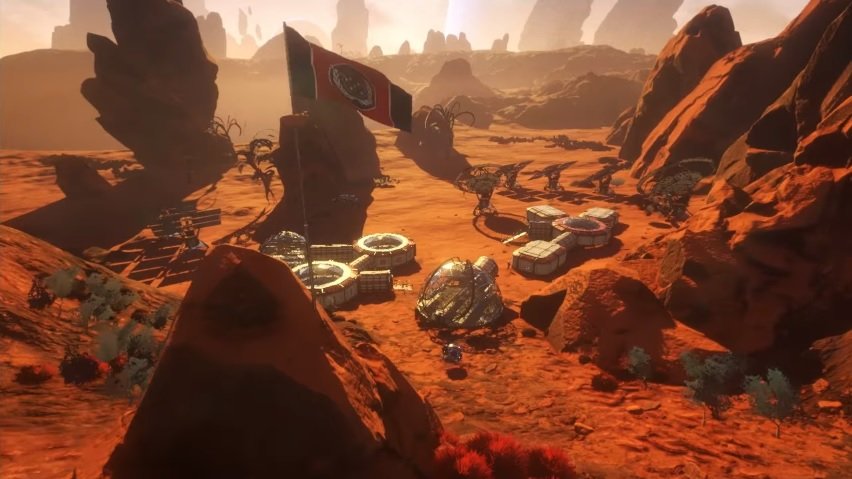 Tame the world! Tame the Universe! We are hu-man. Giant space rocks and their inhabitants will tremble before our mighty tools!

Osiris: New Dawn, set to release on Steam Early Access September 28, turns players into space pioneers. That is to say, you explore , you exploit, and you kill the locals. Those pesky aliens need a civilizin’. The game combines crafting, discovery, and “skillful combat”. The year is 20XX (it’s 2046 but I love the XX thing. Très retro. XX!) and players are part of a United Nations of Earth colonization team. After a spacecraft malfunctions, players crash land on the surface of a mysterious planet. From there, players must set up a base, grow food, research advanced technologies, and stave off alien invaders — uh, defenders. You’re the one who showed up uninvited.

New Dawn has been a five-year project for Brian McRae, founder of Fenix Fire Entertainment. It won MMOGames’ PAX West Best Survival Game and PAX West Best Indie MMO from MMORPG (yes, it’s multiplayer). It made its worldwide debut at this year’s PAX West, and you can see some gameplay from… Game Play… here.

“It’s amazing to finally bring our passion project to gamers everywhere who share our fascination with near-future, space exploration,” says McRae. “What started as a simple idea has blossomed into a gaming experience far beyond what we thought was possible.”

The Steam Early Access page explains that player feedback will help them see what’s working and what isn’t. He says it’s a “really big, ambitious game” and estimates it will be at least a year before the full release. The team plans on making a full solar system with a variety of planets to explore by Version 1.0. Still, the page says they’ve aimed for about 40 hours of gameplay in the Early Access version and have a console version planned as well. McRae says he hopes to improve the experience through full transparency. To follow the game’s progress, you can check it out on Twitter and Facebook, and look for livestreams on Reverb’s Twitch channel.

Mark McAvoy is a contributor for AYBOnline. His opinions are his own, and no one can hear them in space.