Eon Altar: Get your tablets ready it’s about to go down.

I am a lifelong fan of Pen and Paper RPG’s as well as PC RPG’s. Any RPG at all in general. If it’s good, chances are I’ve played it. In the last two years or so there have been some amazing RPG’s released, but is Eon Altar the latest game to join this group? Read on and find out.

Created by Flying Helmet Games, a very small Canadian company, Eon Altar is a very strange computer RPG. To put it simply you play a D&D style RPG with the computer taking the role of Dungeon Master. Your character sheets are displayed on your phone along with the controls and dialogue. Sounds really gimmicky right? It’s actually pretty brilliant. I can’t give away too much of the story because that ruins… pretty much the entire game. Let’s just say some stuff happened, people are angry, other people want to take over the world, and you gotta stop it.

Now, since this game is pretty much a pen and paper RPG, how does it compare to one? Is there an inter-party conflict? Yes. Is there that one guy that ignores the combat and goes around looting? Yes. Is there the one person that kills the important NPC just because they talked too much? Oh dear god yes. It’s pretty much everything you could want in a game like this.

Now, just because I really enjoyed Eon doesn’t mean I didn’t run into some issues. First of all, the way you control your character is by using your phone. You get a little circle on your phone and you move it, which then moves a circle on whatever big screen you’re watching. Depending on your wireless network, there can be a massive delay between moving it on your phone and it happening on screen, which can lead to you doing things you did not want to do. Another huge issue, your phone needs to be on constantly, which means that unless you have your phone plugged in, it’s gonna use almost as much juice as Pokemon Go does.

The game has an adequate style, with some standout pieces like a certain huge monster that appears near the end of the first act, and the character models aren’t a slouch either but some characters are of much lower quality. These are limited to unimportant NPC’s and background environment textures though. 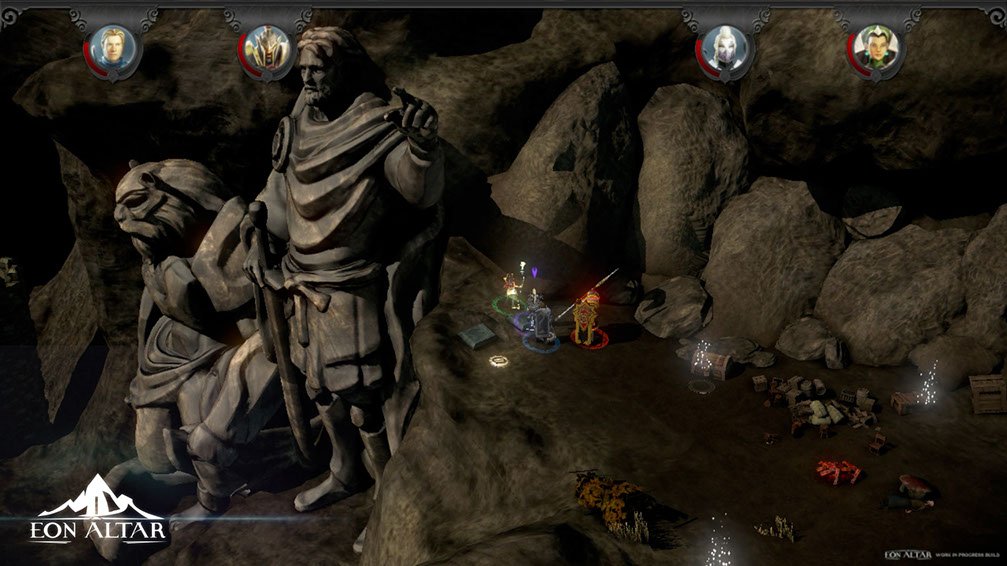 Combat itself works fairly well, everyone can move and act at the same time, or plan it out and take turns. It’s simple enough to do and is executed very well, but I have one MAJOR gripe with this. There are many, many AOE abilities in the game, and unless you’ve played it before, no clear way to tell exactly how large it is. More than once I’ve run into a group of enemies thinking I have plenty of space to use my ability, only to end up downing two of my party members because they were caught in the radius. It might be that there is an easier way to tell exactly what the radius is, but if so I have not found it.

For the most part, the voices of the NPC’s are very well acted out, but for one. There is one particular character whose voice is awful, but thankfully he doesn’t speak very much and you aren’t forced to listen to him for an extended amount of time. Otherwise, the voice acting is pretty good. It’s not going to win any awards, but it’s much better than some AAA games (looking at you Heavy Rain). Still, it’s incredibly satisfying to have some decent voice acting coming out of a small studio.

Another gripe I have with this game is their business model. As of writing this, the game only has one chapter, the first one. You can purchase only this chapter for 8 of your hard earned Canadian dollars, or you can buy the season pass for $17. Now I would have no issue with buying the entire game if it were released completely finished and had all the content already done, but as it stands you only get the first chapter. So you’re basically left to decide if you want to spend 8 dollars more than simply buying the season pass, on a game that isn’t even finished at the moment.

Don’t get me wrong, if the rest of the content is as good as the first, I’ll be incredibly happy, but it doesn’t change the fact that I hate these business models. They work for the Telltale series because you can play the first part of it for free, and then decide if you want to buy the entire game or not, but Eon charges for even the first part. I would be very happy if the tutorial section at the very least were a playable demo.

You may get the impression that I do not like this game, which couldn’t be further from the truth. It’s because I enjoyed this game so much that I am being so harsh on it. It’s one thing when a company with a shitty game has some questionable business decisions, it’s an entirely different one when the game is actually good. I’ll go a step beyond that and say that this idea, using your phone as a controller and having the players themselves voice out their characters is brilliant. Short of actually being in a Pen and Paper RPG, you don’t get this kind of immersion and player involvement in a game. It takes you away from simply being a player and actually being part of the game.

As of right now, there are only five characters in the game, and you can only play with a max of four of them at any one time. The game is already balanced to the number of players you have, and it does a very good job of being challenging without being unfair. That being said, I see no reason why you couldn’t have five people playing at the same time. It seems to be an arbitrary limit imposed by the creators which I really hope they’ll reconsider. If there’s some technical reason behind it, then I apologize in advance, but I truly hope that they reconsider this and allow for more than four players at a time.

Each character is played very differently, you have the wizard who hides in the back and blasts them with missiles, the rogue who goes invisible and stabs them in the back, the crusader who jumps in, deals all the damage and takes all of it to the face, the tank that is supposed to aggro the mobs so that you don’t die (hear that Daphne?) and the bloodthirsty cat man who needs to be almost dead at all times in order to deal insane amounts of damage to both enemies and allies (sorry guys).

The soundtrack is incredibly well done and was actually composed by Tom Salta, a man who has worked on some very incredible games, including Prince of Persia. I honestly can’t say more about the soundtrack as it just blended in so well with the actual game that I sometimes forgot I was playing a computer game. It brought me right into the atmosphere and made me believe I was Shasek, the bloodthirsty cat man who only wants to get paid.

I digress however and have been rambling on for… holy crap over 1200 words at this point. I guess I should wrap this up. If you like old school RPG’s like Baldur’s Gate, Neverwinter Nights or even if you’re a fan of the Pen and Paper stuff, then get this game. These people have poured their hearts and souls into this game and it shows. Despite all my issues with this game, none of them were enough to stop me from playing once I got sucked into it, and oh boy did I get sucked into it.

You can buy Eon Altar on Steam.

Yves Hacault is a reviewer and content writer for AYB. His views are his own and were not altered by any substance known to man, but a few that are unknown.