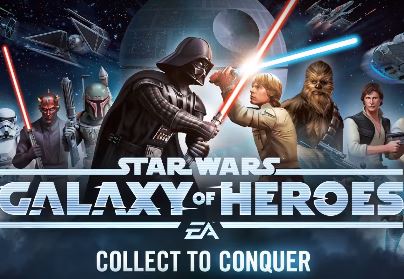 EA’s mobile free-to-play RPG title gets some MMO-type upgrades in its latest update.

EA’s small screen title is getting some big screen updates with some MMO style features: guilds and live chat. The new features are locked until players hit level 22, but once they do and find a guild, they’ll be able to take advantage of the new features.

The new guild system will allow players to coordinate for raids, set “officers” in the guild, manage their membership, and other unannounced features. Yes, I said raids. MMO-style guild raids are also in the update and available for players 22-80 in guilds. The first raid to be released will be The Pit, a small screen recreation of the fight against Jabba The Hutt’s rancor beast, can be seen in the trailer below.

EA is also releasing three new character cards to be earned through the raids or the Guild Store. Han Solo starts the line up as a reward drop for The Pit followed up the Gamorrean Guard and Jawa Engineer to be purchased from the Guild Store.

Unfortunately I’m not a high enough level in Heroes (Mondo Tees took enough of my money last week, thank you) to tell you how many gems the last 2 new characters will set you back. That you’ll have to discover yourself, but I might wait a bit before dropping some hard earned cash. May 4th is coming up and I don’t doubt EA has some new content or deals planned for that Star Wars event.

Matt Kondracki is Senior Editor, News for AYBOnline.com. His opinions are his own .