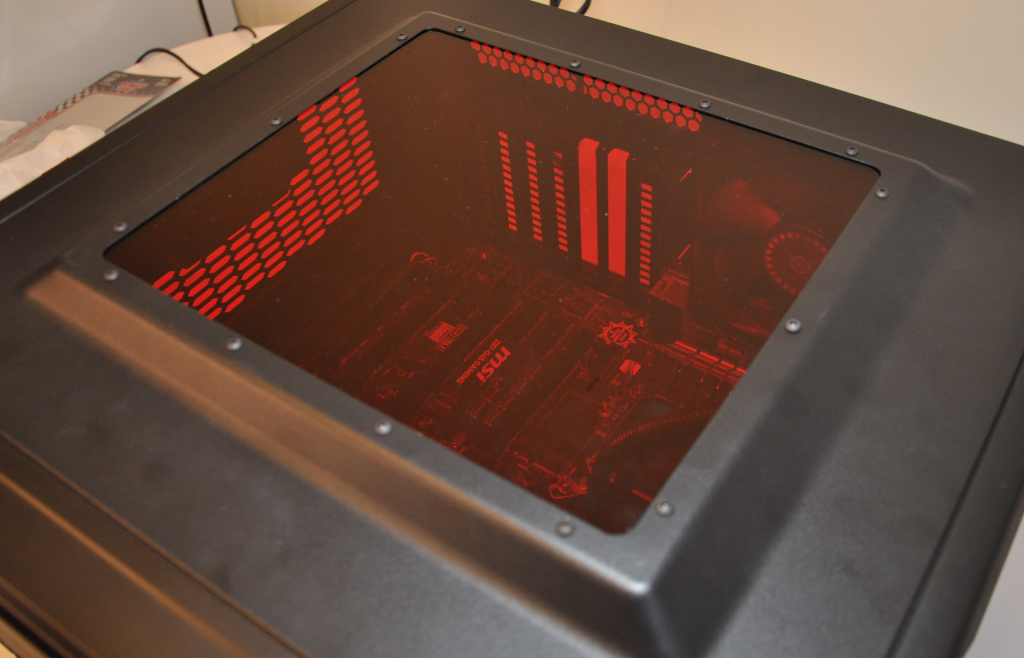 Normally this is where you would find some form of hardware review, or something relating to the changes going on within the VR industry. With BaseLAN coming up, I frankly just don’t have time to do that this week, so I figured I’d talk about the mods I just did to the BaseLAN Demo rig. It is the Saturday of BaseLAN after all!

Over the last few years BaseLAN has been running the Demo Zone for attendees to try out some new things they might not otherwise have access too. We usually have some pretty impressive hardware to display that has been given to us by our various sponsors. The cases we have are Cooler Master HAF XB Lan Boxes. They are nice cases, but they have been the same for the past four events. For that reason I decided it was time to spice them up a little.

One of the systems is built on an Asus motherboard. This particular board is an ROG Maximus V Formula, which happens to have barbs for water cooling. Considering I’ve been an avid fan of water cooled computers for over a decade, and have had 3 of my own, I’ve been dying to do this ever since we received the board. Truth is, I would have likely swapped them If my own board was the same socket 😛

We’ve been collecting water cooling parts for this build for nearly 2 years now. Koolance had sent us one of their i380 CPU blocks before they were even on the market, but we just didn’t have the rest of the build. Finally I got fed up, and decided to use some of my own parts. I had some extra fittings from a build we’re doing on my girlfriends system. I also had an old rad kicking around that had been pulled out of a decommissioned rig last year. I was still missing a pump and reservoir and I didn’t have enough tubing.

AYBOnline decided to foot that bill, so we selected a Darkside pump/reservoir combo that uses a DDC pump, and grabbed some red tubing. I had that up and running for about half a day, and then suddenly the pump stopped working. It actually spewed water out where the power cord goes into it, so a seal failed badly. Speaking with Dazmode.com about what happened, and about what we are doing with it, they decided to help pay for an upgrade. A couple days later we had a Darkside D5 Bay reservoir. This one works like a charm.

At this point I thought I was done for this year, but a modders work is never done. A couple weeks ago I was at my dad’s place for supper and he showed us a display piece that he made to show off some Native American artwork he has. The display was made using a large piece of translucent red acrylic; it’s actually called Tail Light Acrylic. He went on to tell us that he had to order a full 4’x8’ sheet to get the size that he needed, and so he had a bunch left over.

I then told him about the cases we had, and how I thought that acrylic would make a nice window for them. Especially since the color theme of each of these systems is red and black. He liked the idea and offered up the material. The next day I was at his shop with case panel in hand.

Cutting the windows was fairly simple; we measured out the space and cut it down with a table saw. These particular cases have a mesh installed on the top panels that is fastened with plastic push rivets. This made disassembly a breeze, and it made for easy mounting as well. Since there were already holes around the opening, there was no need for more drilling, and therefore no paint was required.

Once I was back home with the freshly cut acrylic windows, I began marking where the holes will be needed. Due to the indented nature of the top opening, it was rather difficult to keep the window in place while marking. I opted to set the window on top of a box, and then let the case panel rest on top of the acrylic without touching the table. Applying pressure to keep it in place, I marked all the holes with a sharpie pen.

Drilling was by far the most nerve-wracking part. I was afraid the window would slip, or that it would crack while drilling. Fortunately I was warned not to use high speed on the drill. I also decided that making a guide hole with a smaller bit would be in my best interests.

Another good tip I was given (thanks Dad!) was to attach the corners before going around the whole thing. This secured the panel, and in the event the markings are slightly off (which mine actually were), it won’t matter as long as you get the first four right. I actually took this one step further and made sure I did opposing corners, like when putting a wheel on your car.

The hardware that was used to mount the screen mesh was sadly not able to secure the window. The rivets were just too short to stay in securely. They worked just fine for my drilling needs, but a more permanent solution was most definitely required.

Fortunately, I have a number of hobbies and one of them happens to be RC models. Because of this, I knew that there would be perfect hardware at the hobby shop. So off to the store I went to pick up 28 nuts and bolts. M3x6mm to be exact. These particular bolts look really nice on the top of the case. They are what you call button head bolts. They have a very nice finish to them, with rounded tops. An Allen key is needed to install these, so you may need some tools of your own.

After I had the window fully mounted and installed on the case, I realized that the red hue of the window made it difficult to see through it. Particularly in the dark, which is how it will be displayed. Obviously a solution was needed, so another order was placed. This time for a pair of NZXT LED light strands.

With these installed the cases look so much nicer. You can see the details of the hardware in the case, and the top gives off this faint red glow, while the mesh is lit up white. On the water cooled machine I added some red dye to the water while I was at it. I think the completed look is quite nice.

Now I need to figure out what to do for BaseLAN 29. As I mentioned, a modder’s work is never done.

Kevin Carbotte is a Content Editor for aybonline.com. He knows a little about a lot, and a lot about a little. The opinions in his columns are his and his alone, but you are free to have them.