Well that was fast! Deus Ex GO is available on the App Store and Google Play right now.

Much like Lara Croft GO and Hitman GO before it, Square Enix Montréal has developed a puzzle game based on the stylish Deus Ex franchise. This game features turn-based puzzle gameplay where you take control of Adam Jensen as he uses his hacking and combat skills to defeat opponents and uncover a terrorist plot. 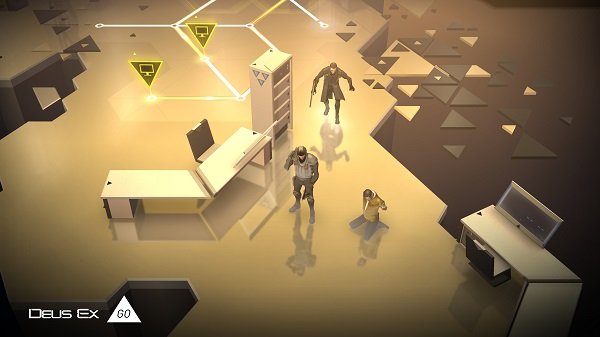 Deus Ex GO will have more than 50 story based missions as well as new puzzles every weekday. Players will use Jensen’s various augmentations to overcome turrets, walkers, drones and various other adversaries. Square Enix Montréal will be releasing a puzzle maker mode after the initial release. This will allow players to make their own custom puzzles and share them with friends. The game will also allow players to unlock Praxis kits to use in Deus Ex: Mankind Divided.

Considering the success of Lara Croft GO and Hitman GO, this seems like a wise choice. With Mankind Divided coming out on August 23rd, this is a good way to have fans get excited and unlock some in-game content. It is also nice when small games like this are announced on the same days that they are released. If only AAA games can close the gap between announcements and their release dates.

Nedu is a writer for AYBOnline. He gets caught every time he tries to infiltrate an enemy facility. His views are his own.