Destroy All Humans! One Small Step on Mankind 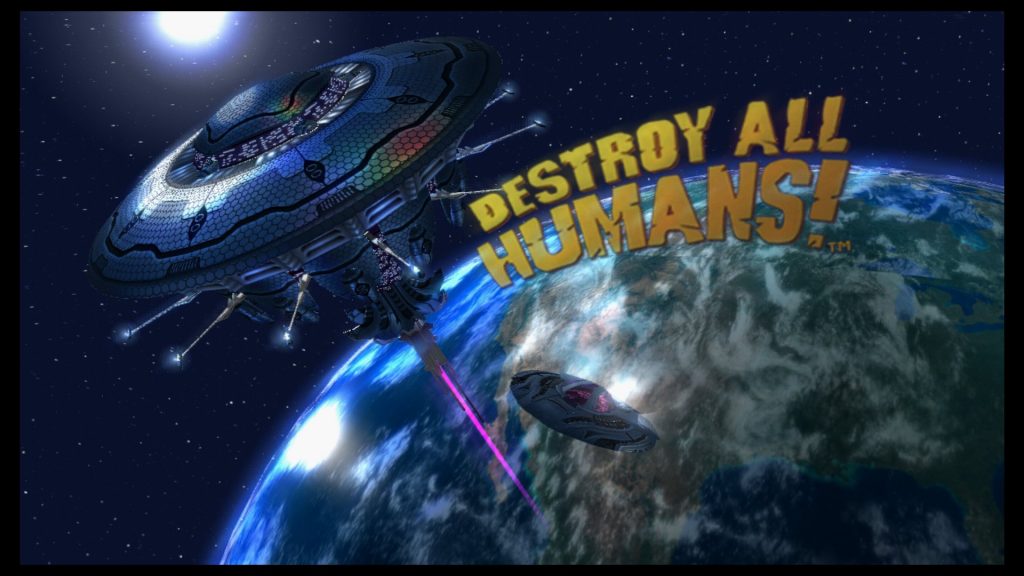 Pitiful human filth! You will lean to fear the might of the Furon Empire as Cryptosporidum-136 (et al) rains firey death down upon your tiny monkey brains. The lucky will be vaporized in his saucer’s terrifying death ray, the less lucky will be probed for their precious DNA. Either way, he will not rest until he has reached his goal: Destroy All Humans!

Classic PS2 game Destroy All Humans! is now available on the PlayStation Store! Play this classic game re-mastered for your PlayStation 4, at a higher resolution, better frame rate, and complete with sharing and trophies! Revisit this fan favorite game today and be prepared to see it look better than ever. (Seriously, I have to restrain myself from putting exclamations at the end of each sentence, because I actually do love this game that much.)

In Destroy All Humans!, players take on the role of Cryptosporidium-136 (Crypto, as he is known to his friends and soon-to-be-victims) in his mission to rescue a fellow Furon who has crashed on Earth and been taken captive by the U.S. Army. Crypto must blast his way through 1950’s American Mid-West, destroying civilians, police, the Army, and the mysterious government agency, Majestic 12. While the U.S. Government tries to cover up Crypto’s one-Furon war on humanity as nothing more than a Communist plot, Crypto will put his flying saucer’s death ray to good use, leveling anything that would get in his way. Venture out on foot as well, as Crypto and his jetpack terrorize the populace with Disintegration rays, Zap-O-Matic beams, the powerful Ion Detonator, and, of course, the infamous Anal Probe. Seriously, after a good probing your brain will literally burst out of your skull, so make sure you point that sucker in the right direction.

The mighty saucer also bristles with a panoply of doom slinging weapons, too advanced for the primitive human defenses to withstand. Wield the mighty Death Ray which can turn humans, vehicles, and buildings into a light frothy soup. Surprise them with the “Abducto Beam”, a tractor ray that can lift up people and objects and hurl them into the air (largely ineffective but a lot of fun at parties). Blast them with the “Sonic Boom”, and flatten your foes with a blast wave that will send them flying. Unleash the “Quantum Deconstructor” and launch radioactive bombs that will render your enemies, tanks, guns, and cows for several city blocks down into their component atoms.

Witness the power of the indomitable Furon mind, as Crypto uses his Telepathy to bend the pathetic humans to his will, peeling thoughts from their heads like you might tear the rind off of an orange. Hide yourself among them with your HoloBob disguise, allowing you to watch and wait for the right moment to strike! Then hurl them in the air with the power of Psychokinesis, tossing their tanks and cars like a child would throw a toy. Harvest enough of their inferior DNA and your mission commander Orthopox-13 will create upgrades for your weapons and mental abilities, bringing ever more violent doom to bear on your primate adversaries. He’ll probably also insult you along the way, but that’s part of Pox’s charm.

“We’re happy to finally answer fans’ questions about what’s next for the Destroy All Humans franchise,” said Reinhard Pollice, Business and Product Development Director at THQ Nordic. “Remastering the original for PS4 somehow makes every bovine encounter and governmental mishap even funnier – Crypto is at his absolute best on PS4!”

So grab it on the PlayStation Store today for $26.99, and get ready to Destroy All Humans!

Jack McBastard is a contributor for AYBOnline. His opinions are his own. He also is the first person in the world to have the Destroy All Humans! platinum trophy. Seriously, go look. All hail Arkvoodle and the sacred crotch!