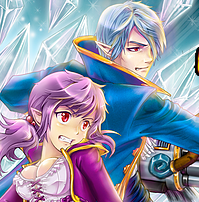 What do you get when you cross Alien Breed with Gauntlet Legends and a bunch of anime demons? A cool looking arcade twin-stick shooter!

From their Greenlight page: “Demon’s Crystals is a frenetic twin stick shooter where you will have to guide the Urican demons through countless hazards in order to restore peace to the world. With the help of a variety of weapons and power-ups, you will be able to defeat the massive enemy hordes.” The game features local multiplayer for up to 4 players, with various cooperative and competitive gametypes. The co-op mode features an oldschool arcade-style campaign spanning three worlds, complete with boss fights and leveling up. The competitive mode appears to be quite extensive, with the team’s Greenlight page listing six competitive local multiplayer game modes for 2 to 4 players. On top of traditional deathmatch and team deathmatch, the game also features:

Demon’s Crystal is targeting all major platforms, including PC, PS4, XboxOne, WiiU, iOS and Android. No release date has been announced but you can read more about the game and vote for them on Steam Greenlight here or their website.

Jake Carewick is Senior Editor, Indies for AYBOnline.com. His opinions are his own.