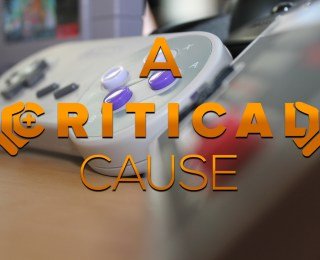 What do you get when gamers assemble to raise awareness for an often-overlooked subject in the community?  You get The Critical Hit – a small but amazing group of gamers who set out to raise money and awareness on mental illness by livestreaming games for 24 hours straight this last weekend.

The group raised over a whopping $3,000 towards mental health services and programs through their new fund, A Critical Cause, set up through The Winnipeg Foundation.  As someone who has family members that struggle with mental illness, I was very misty-eyed as I chatted with one of the The Critical Hit team members Albertine Watson about the success of the stream and why this discussion on mental health is so very important to talk about, both among gamers and within the community as a whole.

So tell me about Critical Hit and how long you have been a part of the team.

Albertine:  So The Critical Hit is a group of friends from Winnipeg who love talking and writing about games. We’re all lifelong gamers. We have a podcast and website where we delve into news and reviews. This whole thing originally came from a project at Red River College as part of the Creative Communications program and grew from there.

Though I’ve known and been a big fan of the CH team for a few years now, I’ve only been a member of CH for about a month! I was recently working with the guys trying to help them find a location for our recent charity event, and Nolan Bicknell, a good friend of mine and one of the co-founders of CH, asked me if I wanted to join the team and of course I said yes. I’ve been looking to get back into writing about games for a long time now and this felt like the perfect fit, so I’m really pleased with how this has worked out. I have a t-shirt and everything, so I guess it’s real now!

This last weekend, your team livestreamed a 24-hour gaming marathon, raising money for mental health issues and awareness – which is a fantastic cause. Why is this particularly important to initiate and bring awareness to this, from your point of view?

Albertine:  Mental health issues are near and dear to the hearts of all the members of the CH team, and I’m no exception. I’ve had so many friends and family struggle through mental health issues of all types, and I struggled with depression for years. There is so much work to be done in addressing the stigma surrounding mental health issues so that sufferers can feel safe enough to get the help they desperately need. Part of this means getting more funding to the fantastic mental health services and programs available in Winnipeg, so these groups can continue reaching out and doing good work.

What was the single most awesome moment that happened during the stream?

Albertine:  The single most awesome moment of the event had to be hearing our participants and visitors hooting and hollering with delight during a particularly heated match of Wand Wars, an unreleased game by local developers Megan Alcock, Igor Puzhevich, and Bogdan Rybak. I’d seen the game before, but it was so fun seeing the rest of the CH team just losing their minds over it. There’s a special magic in witnessing people fall in love with a game. While this event is of course about raising money for our new fund, it was great to showcase the amazing work of these local devs. I felt so happy for them and proud of their work. It was a really sweet moment. Even when the stream was over, the team couldn’t stop talking about that game.

There were so many great moments though. For example, my mother tuned into the stream and requested that we dance to different songs like Hotline Bling and the Macarena when we reached different funding goals. It was hilarious. In addition to my mom checking on the stream, we had friends and fans tuning in from all over the place to support us. One viewer stayed with us for nearly the entire 24 hours, and another good friend of mine tuned in from England to donate and give us his best wishes, which was just so sweet. Then there were the donations. The biggest singular donation we received from one person was $400, which blew my mind. I was very emotional when I saw that donation come in, because that is just so generous and amazing. At the end of the event, we tallied up the numbers and realized we’d reached $3,000 and we were just blown away. Blown away that people cared so much.

How was this initiative started and what are the plans for future events? How do we keep the conversation strong and ongoing?

Albertine:  Last year was our first ever game-a-thon for charity. At that time, I wasn’t a CH member so I came by as a guest due to my work as PR and Community Manager with Complex Games. Last year’s event was part of Extra Life and we raised funds for The Children’s Hospital Foundation of Manitoba. We knew we wanted to do something bigger and better this year, and I feel like we accomplished that. We’d love to expand this event to a larger scale moving forward to really maximize how much money we can raise. There’s been talk about adding multiple “satellite” style teams all over the city, all of them running their own fundraisers. We’d also like to run multiple events per year. There’s so much more we can do and we’re starting the planning process right now. I’m very excited! 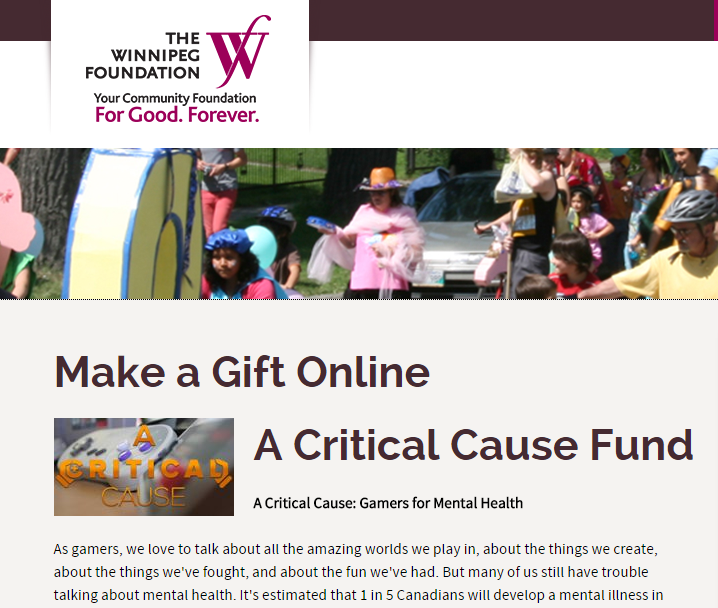 Over $3,000 was raised during the streaming event. Where will this money go and how will it be used?

Albertine:  So all of these funds are directed into The Critical Cause donation fund with The Winnipeg Foundation. Donations keep coming in too, which is really great. The fund will exist there forever to continue helping mental health services and programs.  The Winnipeg Foundation, the organization with whom we have the fund set up with, are matching every $5 donated to our fund with $1, up to a max of $2,000 every year until 2017. This contributes a significant amount of money to the fund and we’re super grateful for it.

Right now, this is a community building fund, which means that The Winnipeg Foundation will funnel those donations to the mental health services that need it most. This way, the money isn’t all going in one place, it’s helping a wide range of groups and services.

What games did you play during the stream?

Albertine:  We played so many games, it’s all a blur at this point! The highlights were Wand Wars, Mirror Mortis, another locally developed game by Amy Gerardy and Graeme Borland (which you can buy right now and you should because it’s a spooky delight), Rocket League, Until Dawn, The Yawhg, Fibbage XL and Drawful (which we were able to play online with viewers, which was great), and a bunch more.

Shifting gears just a little – have you considered raising awareness or initiatives, combining both The Critical Hit‘s and Heart Container‘s interests, to bring awareness to mental health and depression in children and adolescents? Or even other fundraising initiatives?

Albertine:  Heart Container has been on unofficial hiatus for a little while as I sort out how I want to move forward with the project, but the idea of combining Heart Container with the efforts of the Critical Hit game-a-thon and Critical Cause fund is definitely an incredible idea that I’d love to expand on moving forward.

Donations are more than welcome, and the donation page can be found here:  A Critical Cause Fund:  Gamers for Mental Health

Kate is a contributor and a Graphic Designer for AYBOnline, and producer on Level 1 Scrubs Podcast. Her opinions are her own. Feel free to follow on Twitter!