Brick Breaker’s Flair Gets In The Way 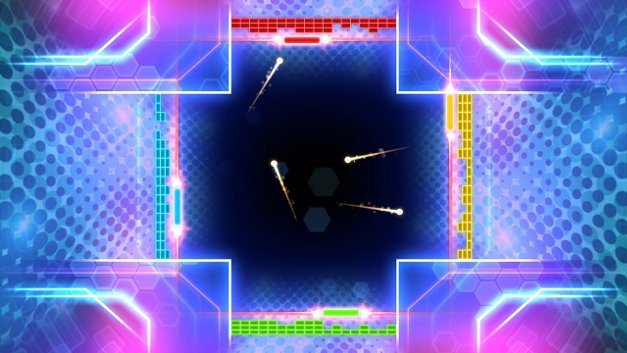 “Gussy it up however you like, Trebek. What matters is does it work?”*

Questionable decisions are made at 4am.

About a month ago, after scouring the PS Store in a sleep-deprived stupor for a new RPG to play, I somehow woke up with a new version of Brick Breaker.

Brick Breaker falls into a category I like to call “pure” games. Think endless runners, Super Stardust, pinball, or most old arcades– anything with a basic core objective in which the outcome is entirely a result of the player’s reactions. But it’s in its pureness where this iteration of Arkanoid falls short.

This version, from Sanuk Games and Bigben Interactive, has a very Geometry Wars/Super Stardust feel in its presentation. It’s neon and it’s got an electronic-woman calling the action; but it also has these fireworks that shoot out of bricks as you destroy them that totally get in the way. The game starts slow but can get quite fast and when it gets to top speed those fireworks are very distracting. Brick Breaker is all about high score, and it should be about how well I play, not how quickly my eyes adjust.

Funny enough, the precision of a PS4 controller isn’t as fun as playing with the spinny-wheelie thing on the old arcades. It’s undoubtedly easier to control on PS4, but the jerkiness of the paddle seems more natural with the wheel. 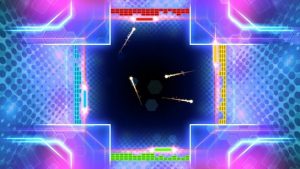 There are tons of levels but they’re unfortunately not available for multiplayer. The multiplayer is fun enough, essentially different types of battle modes, but it’d be cool to have a Tetris-like split screen game with all the levels from single player. There could even be special blocks that, when destroyed, affect your opponent. Personally, I’ve had more fun switching-off on single player levels than spending much time in the multiplayer, which is local only.

The game sells for $9.99. If you’re into reaching for higher and higher scores, and unlocking 100 levels, go for it. Most of the levels are fun, albeit some are tedious, and some of them are stupidly hard. If you can beat Survival mode right to the end, well good lord. You. Are. Wonderful.

I’d give it a solid comme ci comme ça.