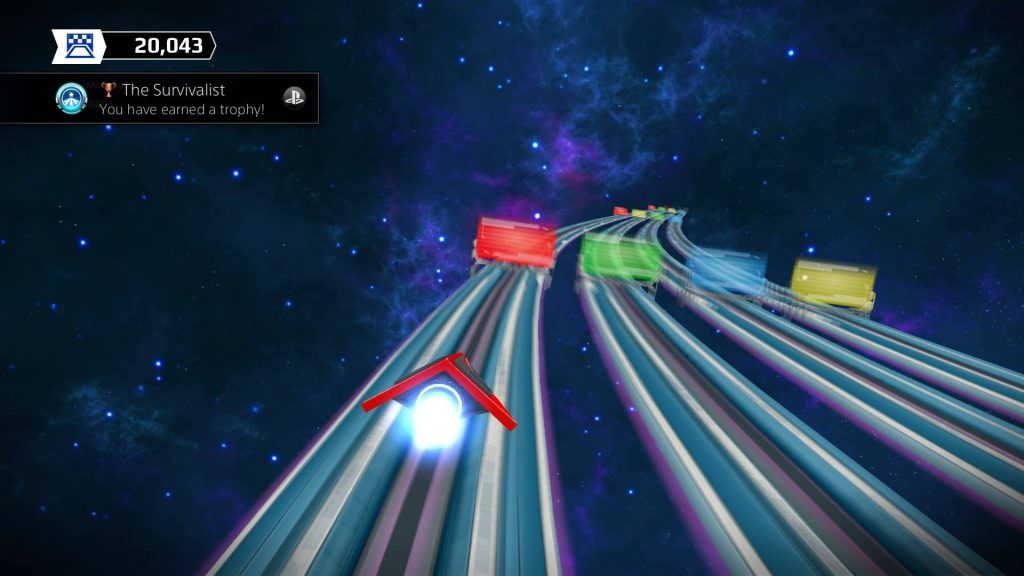 With no local multiplayer,  Switch Galaxy Ultra falls a bit short of the finish line.

Some games are made to be played among friends. Switch Galaxy Ultra is one of them, but you’re barely given the option. Atomicom’s latest release is on the brink of being a great game, but it is screaming for a local four-player mode.

The single player is robust, with 55 courses, six upgradeable ships, and a 22-page comic that tells the story, but the multiplayer is wanting. 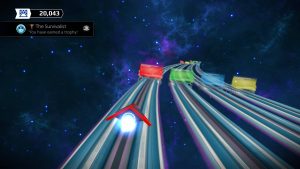 There are only two buttons: left and right. It’s a racing game, but you can’t accelerate or brake independent of the environment. You switch between four rails, speeding up by hitting boosts on the track, while trying to avoid obstacles. It’s like a spacey version of the Battletoads hoverbike level, but with less crushing defeat (I’m seeing this comparison a lot, which shows none of us got over the trauma). Single player is mostly time trials, you’re not racing against any AI, but there is an online leaderboard.

In the standard mode, hitting barriers slows you down, so the better you do, the faster you go. In survival, hit one and you’re done. Survival is more an endless runner than it is a race.

For multiplayer, you can either set the game to Survival, in which all players try to avoid the same obstacles for as long as they can, or you can play Barrier, in which players have to drive through the barriers of their colour. Both are fun for a bit, but they feel incomplete, like a demo. It’s online only, which is hard to make sense of considering you all move at the same speed, so there’s no need for split screen. With the need for precise movements amidst the distraction of the other ships, Switch Galaxy Ultra would shine as a party game.

There’s only one track for each multiplayer, and it takes way too long for the race to get up to a decent speed. As my friend put it: There needs to be a skip ahead 30 seconds button.

It’s also weird that if you crash before your opponents, you’ll be shown a list of players and how far they are, but it won’t actually let you watch them race.

The design of the tracks is really cool. They bend in such a way that usually the player can see far ahead and plan moves well in advance, but the winding up and down also allows for some good pop-up surprises.

Fans of WipEout may be interested to know Jim Bowers designed some of the cities in Switch Galaxy Ultra, while Darren Douglas designed the comic.

Having only played it on console, I can’t say for sure, but it feels like this would be a pretty solid handheld game. Races are short so you can just pick it up and play for five minutes, and “gold” runs in single player are challenging enough. You can get it for Vita, PS4, or Steam. the Vita and PS4 versions are free this month for PS Plus subscribers, although thanks to the PS Store’s awful interface, you have to do a bit of digging to find it.

The single player is all there, so definitely check it out if beating your own personal best and gunning for the top of the leaderboard is enough to keep you coming back. But there are better racing games, and there are better endless runners.

MrMcavoy is a content writer for AYBOnline.com. His opinions are fleeting. And his own.