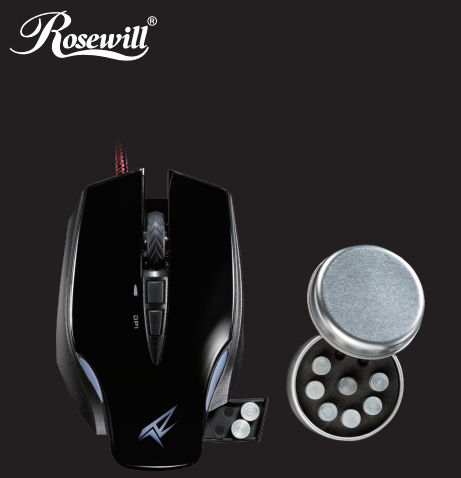 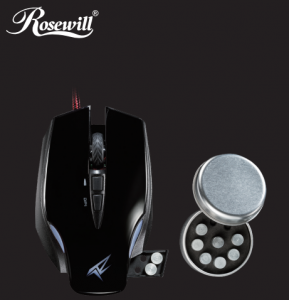 I got excited when I first saw the Rosewill RGM-1100 Wired Gaming Mouse. It looked like Rosewill’s variation on one of my favorite mice of all time, the Corsair M60.

It didn’t take long to figure out the differences. The mouse looks cool with the black plastic top and brushed metal bottom with red LEDs. The side of the mouse has a nice textured plastic; however, the shiny plastic on the top collects oil and fingerprints.

All of the buttons on the mouse have a nice solid click to them, including the extra buttons for DPI adjustment or marcos. The cable is sturdy and sleeved in red and black, while the usb connector is gold-plated. The RGM-1100 has six easy-to-change spots for weights that can be swapped by pressing a little black button the bottom of the mouse.

But then, I found something really strange. If you don’t have their software installed, the side buttons on the mouse that should be forward and backward are instead changed: forward presses control and back presses both shift keys. I have never seen anything like this before and I have no idea why anyone would ever set it up like this. Rosewill was nice enough to give you nine weights in a little container, even though you can only use up to six at once.

My two biggest complaints are with the pads on the bottom of the mouse and the 8200 DPI sensor. The feet are mouse are a rough plastic instead of the smooth teflon or Polytetrafluoroethylene pads, leaving the mouse with a lot of drag.

The nail in the RGM-1100’s coffin is the sensor: it’s very inconsistent. The same mouse movement in a first-person shooter would always give me a different turn radius and it bothered me so much, I had to stop using it.

Altogether, the Rosewill RGM-1100 has far too many issues to recommend to anyone, but maybe they will get fixed in Version 2.

Patrick Algeo is a Contributor to AYBOnline.com.