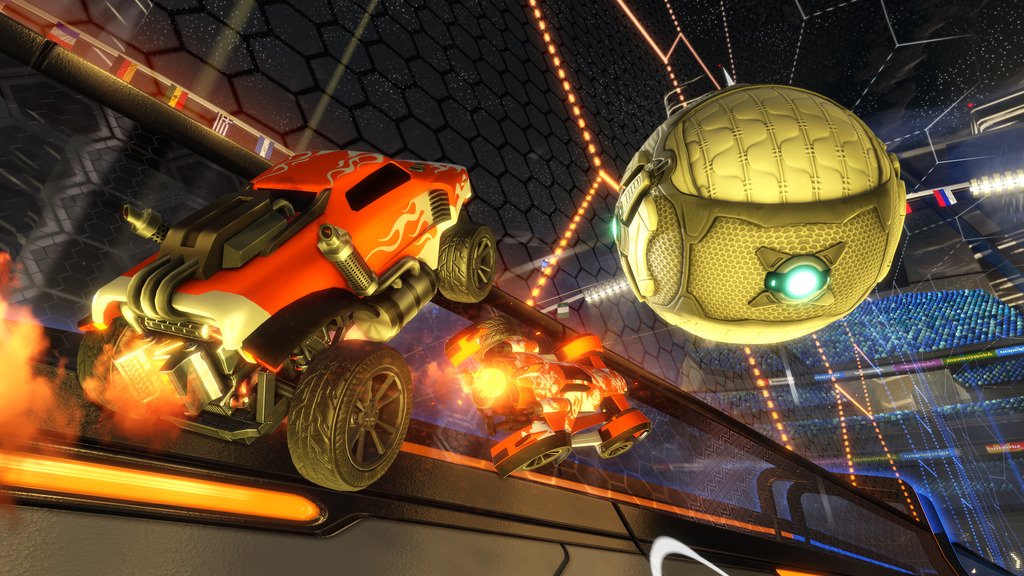 This game snuck up on everyone. I was sitting there with my friend asking about this month’s PlayStation Plus games when Rocket League came up. Neither of us knew what the hell it was and the trailer didn’t inspire confidence. I recall dismissively referring to it as looking like “Wii shovelware in HD” before flipping through another store page.

It’s been a month since my dismissive attitude turned into glee. I can’t stop playing with my friends online or coop on the couch filling my living room with shouting and jeers about whiffing on the ball or slamming in a sick goal. This little game is a blast.

It’s simple: you drive a car (with a funny hat) that can jump, flip, and rocket boost on a soccer pitch while trying to score the ball on the other team. But like The Beautiful Game we play with our feet it’s completely engrossing and simple. Even if you’re not a fan of sports games like myself this game gets it’s hooks in you quick with uplifting electronic music and a beautiful colour palette. The tutorial is so basic you can finish it under 5 minutes and be playing online inside of 10. Playing is just easy.

You can’t help but feel like a pro when you score your first goal because this game has the sort of controls that just feel right. Every goal feels earned thanks to these controls. I liken it to games of the early 90’s where simulation was impossible so it was all about making the player feel in control. That simplicity and control is what makes playing feel so good, even when you lose, because every time you bump, bash, block, or totally whiff on the ball you know it was you. Not once have I felt frustrated and blamed the game.

That’s where the real depth in this game comes in: patience. Early on it’s easy to boost everywhere and double jump constantly but you soon realize it’s the patient ones; the girl waiting at centre pitch, the guy waiting in the wings with 100 boost, the one who sits in goal and holds the jump for that extra half second to get the extra height needed for a game clutching block. You’ll find that the depth lies in the finessed movements you can only achieve with patience.

With built in split screen play on both PC and PS4, ranked match making, spectator tools for video editing tools, free map support, and even cross platform matchmaking it’s clear this game has legs. I bet those legs will take it into competitive play in a big way too, you can mark my words. I can’t wait to see where Rocket League blasts off to next.

Matt Kondracki is a Contributing Editor to aybonline.com. His opinions are his own.