AYB Reviews: Punch Club – Not Quite A Knock-Out 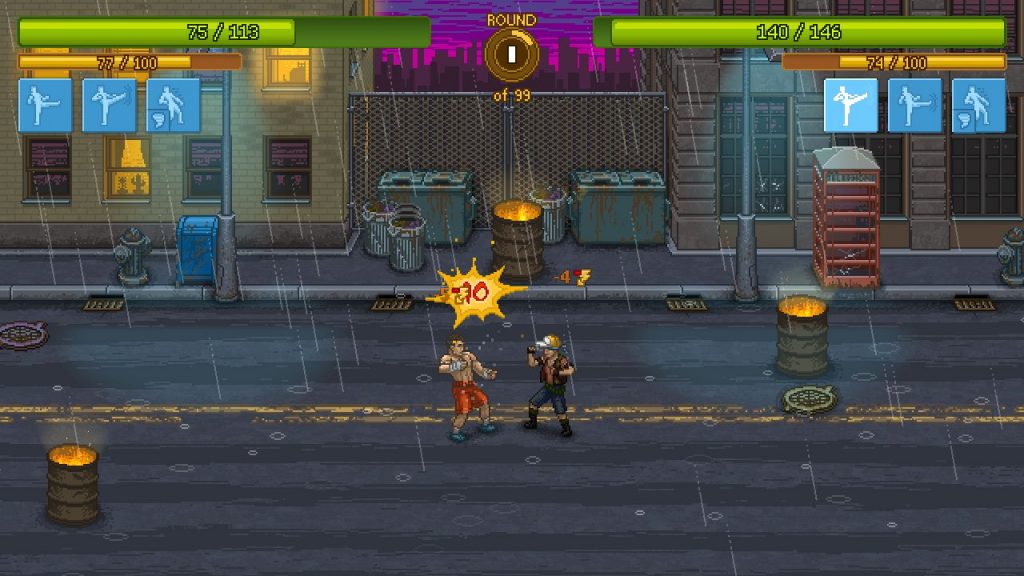 When TinyBuild announced they were making a 16-bit, 80’s inspired fight training game called Punch Club, I was all ears. I had visions of training a fighter with the burly good looks of Rocky Balboa, mixed with the deadly roundhouse kick of Frank Dux.

Unfortunately, Punch Club did not deliver on this, but it just ended up being a different game than I expected.

That Style and Music…

There is no other way to say it, Punch Club looks and sounds amazing. The 16-bit art is top-notch, as usual from tinyBuild. Every scene in this game is lovingly crafted with beautifully rendered living locations, nicely animated sprites, and a ton of easter eggs from all the ’80s fight movies you know and love. The music is awesome, and is very reminiscent of classic ’80s training montages. Most of it is very catchy and will be stuck in your head for days after playing. tinyBuild really are masters of visuals and sound — both crash together to really draw the player into Punch Club.

And then there’s that guy with the red eye…

He is the catalyst for your fighter to train hard and eventually work your way up for your chance to defeat him. I’ll give tinyBuild props for the campy villain and ridiculous spoof of the Double Dragon medallion in their story, but unfortunately both of those things barely play into the plot outside of seeing or mentioning them a couple of times.

Even though (spoiler!) the man with the red eye kills your father in the opening trailer, you don’t even catch a glimpse of him again until you join an underground fight club — an optional part of the story. I’m sure he would have showed up again later in the core storyline, but for having such a evil villain as a driving force in the game, they certainly don’t use him like one.

The main issue I have with the game overall is that it just isn’t very fun to play. “Playing” consists of pointing and clicking your fighter around the various locations of the map telling him to train to raise stats, eat when he’s hungry, sleep when he’s tired, work when he needs money, and even watch TV when his mood is low.

I wouldn’t have a problem with all of this if it wasn’t a ridiculous grind just to keep your stats at a moderate level. The worst part is, you need to work to make money while all of this is going on, and every day that passes makes your stats drop, so you have to constantly train to keep them up. Ain’t nobody got time fo’ that!

Even after all of your pointing and clicking, the fighting only consists of a few more points and clicks. When entering a fight, you basically just select a few moves based on the type of fighter you are or the type of fighter you’re about to face, which doesn’t really seem to matter, and click “FIGHT!”. Then sit back and watch your fighter get pounded for about 3-5 matches while you do nothing. It’s a very hands-off approach that is more akin to a free-to-play mobile game instead of a full Steam title.

But I’ll let this go to decision…

I know the game is getting positive reviews and there are a lot of people enjoying it out there. I just feel this game was a missed opportunity. You have a game with great visuals and great music that would be right at home alongside Double Dragon, Mike Tyson’s Punch-Out, and the Nintendo Kung Fu game, but there is none of that in here.

It was also kind of sad to see you couldn’t design your character’s look, or even choose a male or female fighter. I had some fun with the game, and it was nice to play something that wasn’t just a 2D beat-em’-up, but I feel it just went too far in the other direction.

I absolutely adore TinyBuild, but this one just isn’t a contender.