The bass bumpin’, fist pumpin’, and body dumpin’ pixel action of tinyBuild’s Party Hard just got harder in the new DLC; Party Hard: High Crimes. After banging my head against my keyboard restart after restart trying to leave no survivors, is this DLC worth your cold hard cash?

I love stealth games, from ninjas fighting demonic warlords or cloned soldiers fighting giant bio-mechs, to assassins in different time lines and government secret agents who really like shooting out light bulbs. If you take the pathfinding skills of modern action stealth games and combine it with being a “trap god” (see the pun there) you get the stealthy strategies you can create in Party Hard. The idea behind Party Hard is absurd…a murderer is on a vicious killing spree to get some sleep; a pretty dark joke…yet it starts becoming relative for me and beckons to my inner darkness and desires to just get some sleep.

Being a trap god comes complete with ridiculous executions such as random bear traps, killer sharks and my personal favourite, a flying rainbow laser firing butt. The hardest part of being a ruthless cold blooded party animal is being patient enough to lure your victims (which includes and is not limited to clowns, bikers, aliens, drug dealers, punks, goths, zombies) into the traps. As simple as the idea of running in to kill everyone is, hiding in plain sight like Ezio isn’t easy when you’re a big Chainsaw wielding, hockey mask-wearing slasher from the 90s.

The level of creativity that this game bleeds takes in all the hot fads and gaming trends. The pixel art design trend, EDM and party music hype and the simple yet sophisticated gameplay are all the things I like; wrap all that up together with some rusty barbed wire and you have this psychotic bundle of joy. The story is fairly straightforward and beautifully extreme; your character is out to kill everyone at a party because he just wants some sleep. We have all been to that point of exhaustion that I’m sure you had wanted to murder everyone at the bumpin’ party next door, but this game brings those dark fantasies to life. 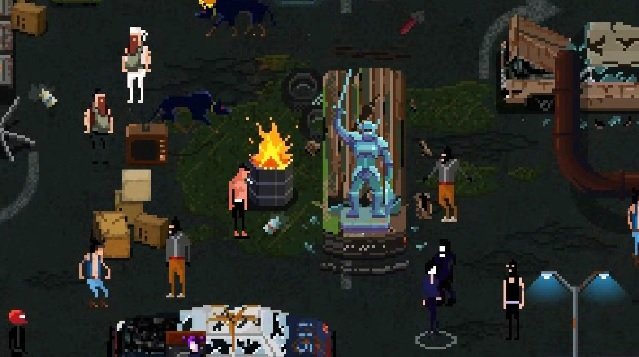 Difficulty acts as a double-edged sword to the back of a drug dealer; for me I found it to be the right spot of difficulty; it can attract players who love a challenge of a stealth game yet welcome casual players to bang their head on a stucco wall with me. Staying aware of mobs and lines of sight of other party guests make a huge difference in your success, and having an overall awareness of your guests can be difficult. The game all takes place on a single map and the idea of killing everyone in a room sounds easy, but with everyone having the ability to call the police it becomes difficult to keep track of where and when to kill your victims. I personally stalk my victims or wait for someone to be outside then I hide their bodies in the corner to create a castle of meat.

Party Hard’s newest DLC High Crimes is available now on all platforms which includes some great new and difficult large maps as well as some extra mechanics that shake up the gameplay, such as a partner in crime…

Kelvin M. is a Content Contributor for AYBOnline who starting to miss the days he Partied Hard.