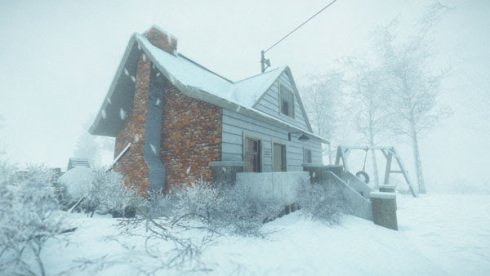 I’ll be honest, I’m a sucker for a game set in Canada. When I first looked up Kôna: Day One, I was pretty sure I would enjoy myself; a first person adventure game, with a narrative driven story, “an interactive tale” and the very first game from Canadian developers Parabole. Even if I’m not a huge adventure game fan, I figured the environment would be fun to explore and maybe have an interesting story. Plus, who doesn’t want to run around in sub-zero temperatures with snow gusting everywhere?

You are Carl Faubert, war veteran, private investigator; you’ve traveled far from home, to Atamipek Lake, in order to take a case from wealthy entrepreneur W. Hamilton. That’s about all you need to hear from me; I don’t want to reveal too much about the story (not that I know much) and I can’t compare to the dramatic voice over work that tells the narrative. I loved searching for things to interact with just to hear how the action would be portrayed by the narrator.

It was so thrilling for me to run around as Faubert, through the trees and brush of this frozen lake side town. The tall trees would make me feel small, small wood sheds by the side of a house would remind me of the importance of heat in northern Quebec; it all keeps you grounded in the world around you. All the little touches really hooked me, such as a Jacques Lemaire hockey card that I found in someone’s house.

The only problems I’ve had with the game, are how frequently it crashes and the initially long load time; by which I mean, I’m enjoying playing it so much that my inability to do so had become frustrating. The game is still very much in development and the developers are already working on fixing them, so I can see these being fixed in future patches.

Kona: Day One is just the first act in a four act arc, each boasting 2 to 5 hours of gameplay. I’m looking forward to getting into it and to all potential updates to Atamipek Lake from the team at Parabole, hopefully I’ll see what’s in store for Faubert.

Cody Lockhart is a content writer for AYBOnline.com. His opinions are his own.