BASELine – Kingdom Hearts: Unchained X (My Friends Are My Power!) 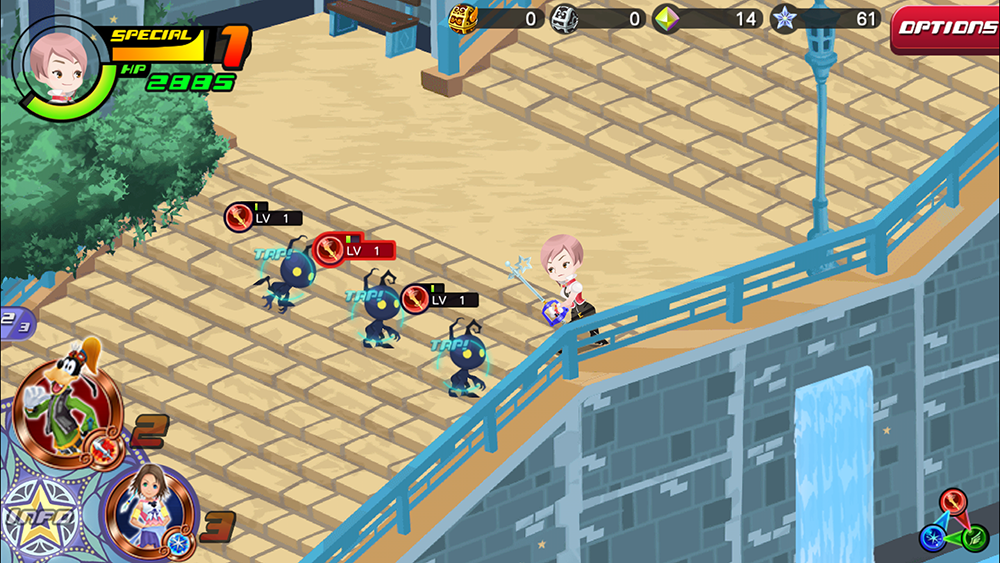 For those who follow the franchise, you know the convoluted timeline and story behind the Kingdom Hearts. Recently, Square Enix surprised us (not really) with a new game (not Kingdom Hearts 3, as I shed one perfect tear down my cheek…)

With the trend of gaming making its way over to smartphones and tablets, it was only a matter of time before the beloved series made its debut over on Android/iOS, with series installments on PS2, Game Boy Advance, PSP, Nintendo DS, Nintendo 3DS, and HD remasters on PS3 under their belt.

Released on April 7th this year, the game takes place 100 years before the events of the first Kingdom Hearts game, which makes things a little easier for newcomers to the franchise to get their feet a bit wet in this magical and colourful adventure. For those who are well-versed with the series, you will be pleased to know that events in Kingdom Hearts: Unchained X (pronounced “key“) will be connected to the upcoming Kingdom Hearts 3.

Upon its release, I was also playing Miitomo around this time. While I am a huge fan of the KH franchise and fawned over the adorable art of Unchained X, I was a little skeptical of how well it would be able to capture my attention, and I was in pretty deep with Miitomo…

… after about two days of playing, I uninstalled Miitomo.

So what can I tell you about Unchained X and why I’ve invested 30+ hours into this freaking game? I’ll leave out my own love for the series at the door and explain certain things that make this particular mobile game interesting.

1.) Upon installation, you have so much content ready for you to dive in.

On release, Unchained X already had 250+ story quests for users to conquer, and like the natural progression of RPG games, quest difficulty increases as you level up and get stronger. With each quest, you are given three objectives to achieve — all optional, if you prefer — but with each objective you fulfill, you receive more EXP, Munny, better items, and a special little element called “Lux”. We’ll talk later about what Lux is and why it’s important.

Not only are there story quests to complete, but there are also Special Quests. These change daily but typically follow a pattern, depending on what your needs are. For example, Tuesdays can be all Magic Medal quests, which means Special Quests completed on that day give you EXP medals for your Magic Medals, as well as medals that allow you to evolve said Magic Medals, making them more powerful.

Lost? No worries, I’ll catch you up to speed further down.

After Special Quests, you also have Events. Events are special quests where you can obtain exclusive gear and fight special bosses during a set amount of time. Recently, a Zootopia event was held for two weeks, where you could fight a special boss. Upon its defeat, you were rewarded things like Event Coins, allowing you to spend on obtaining all the Zootopia outfits and add-ons.

I’m getting ahead of myself here. The point is, once you install, you have no shortage of things to do. So what’s next on the list?

2.) They’ve made a unique battle system that works well.

I understand not everyone loved the Card system in Chain of Memories like I did, but Unchained X‘s battle system took some notes and created something that seems to work in a simpler way. As I mentioned, Medals are the way of life as they represent your attacks, but more specifically what type they are changes the tide of battle. There are three types of medals you can equip: Power Medals (red), Magic Medals (blue), and Speed Medals (green).

While some medals are stronger against some enemies depending what type they are, others can be weaker and end up being the difference between winning and losing. If you are entering a world where the target enemy is Power-based, you are not going to want to equip Speed Medals as Power trumps Speed. In order to divide and conquer, you will need to equip some Magic Medals if you want to deliver big damage. Power trumps Speed; Speed trumps Magic; Magic trumps Power.

As you quest, you will obtain EXP Medals that you can put towards your medals to level them up and eventually evolve them into even more powerful medals, sometimes randomly obtaining the ability to inflict status effects or to give yourself special Attack or Defense buffs.

It wouldn’t be a Kingdom Hearts game without the presence of Keyblades. Keyblades allow you to equip medals and as you strengthen your Keyblades, more slots become available so that you can equip more.

3.) Microtransactions are optional — but definitely not required.

Miitomo was fun while it lasted but it became painfully apparent right away that, if I really wanted to obtain certain items, Daily Bonuses weren’t cutting it and I would need to fork over some cash.

Unchained X gives you the option of purchasing Jewels in order to buy medals, but it never feels necessary. The rate at which things like Munny, Jewels, and Medals occur go at a pace that is appropriate and never strongarms its users into feeling like they have to go to their wallets to enjoy the game.

4.) Your friends really are your power. 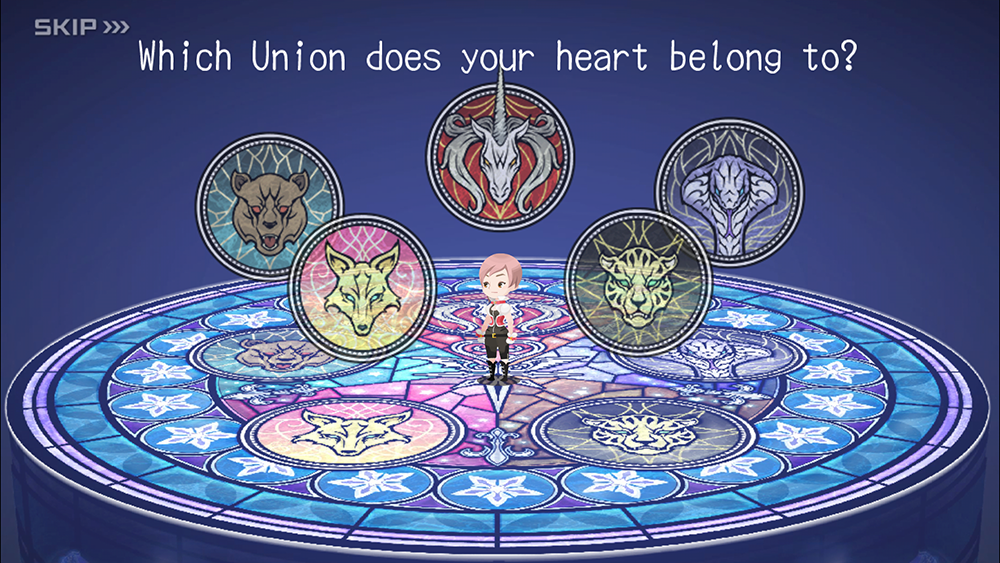 You know how some of the Kingdom Hearts games start with a series of questions that determine your strengths, weaknesses, and the rate at which you grow stronger? Unchained X does the same thing… sorta. Instead of delving into the nitty gritty of your character growth, you will be asked to choose a Union to be part of. There are five in total: Anguis; Leopardos; Unicornis; Ursus; and Vulpes. (#TeamUnicornis)

While Unions aren’t too terribly relied on in order to have a good gaming experience, they do add a layer of fun on the social side. The purpose of Unions is for ranking and Guild matching primarily. If you have a bunch of friends playing Unchained X, consider creating a Guild together under the same Union. I truly think joining a Guild or getting a group of your friends together to create one is really the way this game was intended to be played.

When you are part of a Guild, special things become available, such as a private chat between your and your Guildmates. Communicate when you need support with a particularly tough Raid Boss, inform your friends of a special event happening, or just shoot the shit. The chat even comes with special stickers!

Speaking of Raid Bosses, any that you help your Guildmates with or vice versa, you receive experience and special items regardless of who is hosting — as long as you participate. It’s a collaborative effort where those who get involved and play together, win together.

Being part of a Guild also enables you to share your Medals with your Guildmates and vice versa. So if your friends have Medals that are immensely strong, are the right element, and can do the job you need, take it along with you to gain the upper hand in battles! Your friends’ powers are yours to use.

At the end of every week, Guilds and Unions get ranked, and if you remembered that I mentioned a special element called Lux, this is where that comes into play. Lux is obtained from every quest with every enemy you fight. The more quests and fights you get in, the more Lux you receive, and that means the higher your Guild and Union are ranked. Depending where your Union and Guild is ranked at the end of the week, special items are earned like Avatar Coins, Munny Medals, or Jewels — multiple in-game currencies that allows you to cash in on sweet character add-ons or special medals.

Within the one month since its release, Unchained X has been downloaded over two million times so far, as confirmed by Square Enix this past week. I can honestly believe it: users are getting a better quality gaming experience, rich with content and great social elements.

If I were to give some kind of critique though, the starting tutorial was a little overkill, having you go through over 20 quests before you can freely choose to do things on your own. This might be partly to do with introducing a completely new gameplay system, as well as establishing a story within the start of the universe. But once you get through the tutorial, it’s all smooth sailing.

Think it’s your cup of tea? Join in! Me and my Guild “Key Baes” will see you on the battlefield.