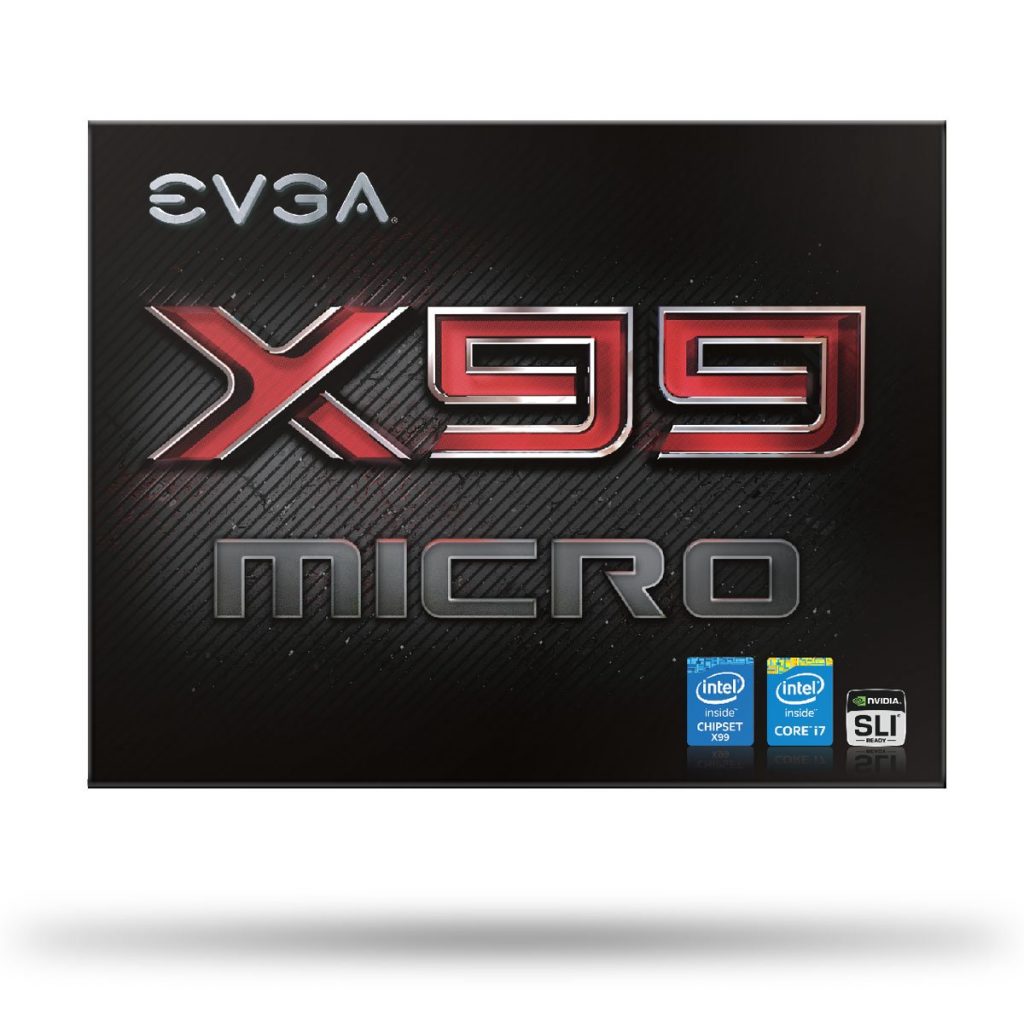 EVGA’s x99 Micro motherboard promises the benfits of the x99 platform, in a small form factor board, but does it deliver the experience you’d expect?

The majority of motherboards designed for this platform are designed with the full ATX form factor to fit all the extra features that x99 has to offer. M.2 SSD drives and quad channel DDR4 are some of the major differences between the previous x79 and the current x99 platform, and they both take up a fair amount of space, making it difficult to offer an mATX motherboard.

EVGA managed to squeeze everything into this small package by maximizing the space available. Rather than eight DIMM slots that are normally found on x99 boards, the x99 Micro opts for four DIMM slots instead. This design limits the maximum memory to 64GB, though it will be much more common to find 32GB kits with four sticks of RAM.

For storage you’ll find six SATA 3/6G ports, each one capable of RAID 0, 1, 5 and 10, with transfer speeds as high as 600MB/s. The board supports M.2, the latest port for accessing SATA drives, but only the shortest of the 3 sizes of M.2 drives. When this slot is populated USB 2.0 #5 will be disabled. This has to be set in the BIOS.

X99 Micro has 3 PCI-E 16x slots that EVGA claimed are capable of 2- and 3-way SLI, though 3-way is not at all possible without a pair of riser cables. The first PCI-E slot has a double space between it and the second slot, but the third slot is only a single space away from the second, leaving it completely covered while a graphics card is plugged into PCI-e slot 2. Because of the way x99 processors distribute their PCI-E lanes, you’ll need an i7-5830K with 40 PCI-E lanes to even try this anyway, since slot 3 runs in x4 with a i7-5820k that only features 28 lanes.

What’s more, when the second slot is populated it’s impossible to have the front mounted USB 3.0 plugged in. The header sticks out vertically, and it located along the bottom edge, which gets covered when a GPU is plugged into the second slot. The third slot is completely blocked if a dual slot card is used in slot 2, but there’s practically no options for single slot cards that are SLI capable. The other issue is that there are no SLI bridges available for TRI-SLI in that spacing configuration.

Around back there are six USB 2.0 ports, four USB 3.0 ports, an Intel Gigabit NIC, analog and optical audio jacks, and a BIOS/CMOS reset switch. EVGA also includes a black bracket that covers the I/O devices, leaving only a sleek black look for windowed systems.

Another feature that EVGA included that you don’t usually find on typical motherboards is a built in temperature probe. Bundled in the box you’ll find the probes that connect to the probe header located next to the 24PIN power header. Considering EVGA was already pressed for space on this mATX board, it’s quite surprising the company managed to include something likely to be used by so few customers.

There’s not a whole lot else in the box. EVGA gives you four SATA cables, the temp probe, a flexible SLI bridge (only a single), and the I/O shield. There is also a driver disk and a metal case badge.

Now it seems like I’ve been hard on this board, and frankly I have. EVGA has essentially lied to its customers by claiming that you can do 3way SLI with this board. Maybe in a milk crate! You can’t just slam the technical ability, without the physical ability, into something and call it a feature.

EVGA has done what almost no one else has done by making a Micro ATX x99 motherboard. The enthusiast platform calls for a lot of things, and the CPU socket takes up a great deal of space. The company should be recognized for this feat, but it’s disingenuous to market something that, frankly, people have to go out of their way to make sacrifices and modifications to use.

If you want a small form factor x99 based system, you don’t have many options. EVGA’s x99 Micro certainly isn’t without it’s shortcomings, but short of some very advanced systems that should probably be built on a larger platform, you can build a pretty powerful single GPU LAN rig with this board. Just remember you’ll be limited to how far you can expand, more so than what the box says.