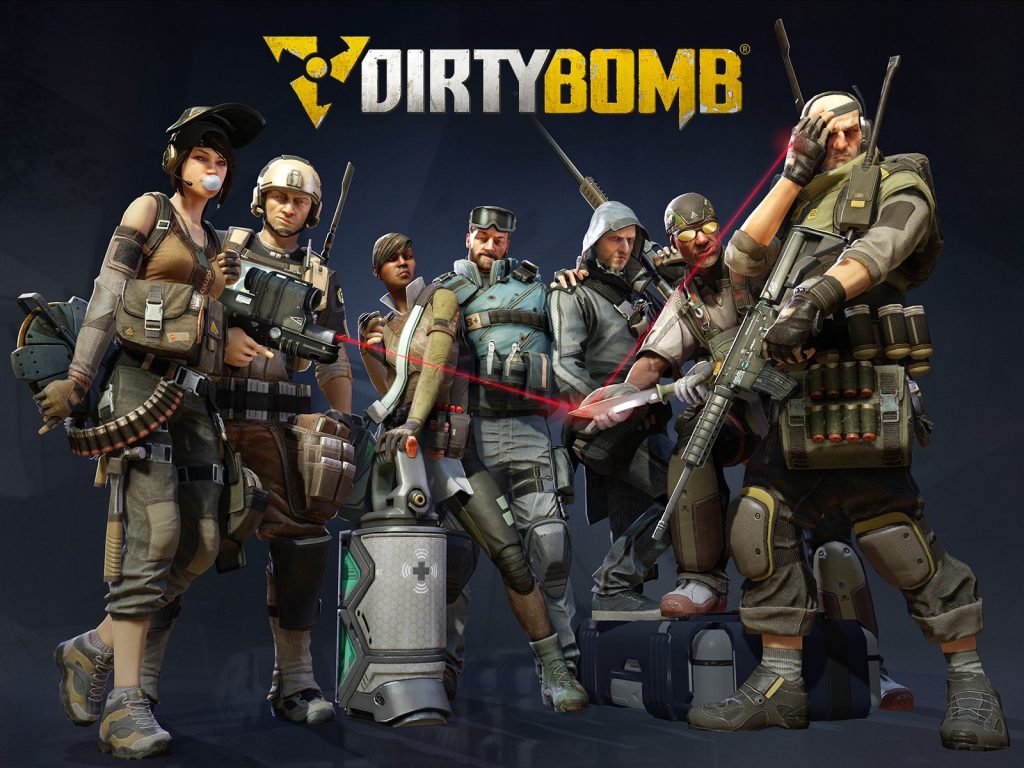 Over the weekend I finally had a chance to try out Dirty Bomb. It’s not without its issues, but what beta game isn’t? What’s really important is what it does well, and honestly, it’s got a lot going for it.

Dirty Bomb is a new free-to-play twitch shooter, with an emphasis on team work. In my 4 hours with the game, here’s my takeaway thus far. The game feels and looks a lot like Team Fortress 2. The art is colorful and silly, just like TF2. The objectives are also comparable, with EV Escort missions (similar to the carts in TF2) and datacore retrieval (intelligence). There’s even a voice that speaks to the players during the match, only this one is british. “Don’t let them get the bloody objective!” he’ll yell at you.

TF2 is a fast paced shooter, but it never really felt like the old-school shooters like Quake3 Arena or Unreal Tournament. Dirty Bomb does. Where it differs from those games, is that you will never survive on your own. The developers have put a lot of effort into making sure that the only way to succeed is to work together. In the opening video, they tell you not to be a “Dick”. There’s no room for lone gunmen in this game.

Another game that Dirty Bomb borrows from is Mass Effect 3. Specifically, the item collection system. In Mass Effect you earned credit in matches that let you buy boxes that would have random items in them. These items would be better weapons or upgrades. In Dirty Bomb, you get credits that let you buy cases. Inside the case will be one random loadout card, which you’ll need in order to get better equipment for your mercenaries. There is no option to select your preferred main weapon and side-arm independently. Loadout cards have specific setups that can’t be altered other than to change cards. The cards come in 5 different tiers; Lead, Iron, Bronze, Silver, Gold. Each level being rarer, but offering presumably better weapons configurations.

The game has nine mercs to choose from; four of which are unlocked for you at the beginning. Two mercs are constants, but the developers have been rotating two of the four slots. It’s unclear if this will continue after the beta, but I do hope so. It will keep the game fresh for casual players who don’t wish to spend money, and don’t have the time to grind for the credits needed to unlock more.

To access the rest of the mercs, you have a couple of options. First you can grind your way to them. The game is designed to be completely free, but this will take some time. You’ll need to accrue 30000 credits to unlock the cheapest character, but that can be a fair bit of work. Credits don’t seem to be coming in that quickly, even during the double xp and credit weekend that just concluded. Your other option is to purchase the mercenaries with real money. Each one has slightly different price, but expect to pay close to $10 for one. Currently, while the game is still in beta, you can purchase a Mercenary Pack for 50% off which unlocks the remaining five mercs; plus you get 35k in in-game credit. Buying this pack will also get you instant access to the closed beta if you don’t already have it.

Contrary to what you are probably thinking, the game is not pay-to-win at all. The loadout cards make it so that buying a new mercenary isn’t guaranteeing a victory. Each class starts at the bottom until better loadout cards are found. This ensures that there is a heavy chance aspect to how players are able to build their roster; only very luck players, or people who have spent hours playing will get the best gear.

The game currently has two modes. Objective is a less balanced, but quicker game mode. In this scenario players are split into two teams; one team attacks, and one team defends. There is no reversal of roles in Objective. Stop-Watch is pretty much the same thing, but the roles reverse. Before a winner is declared each team plays both attacker and defender. The winning team is determined by the quickest completion time, if both manage to actually complete the task at hand.

There’s a fair bit of strategy involved in selecting your character. You see there are three slots you need to fill to make up your own squad. Select the ones that play to your strengths for the most success. For example, I found it difficult to play as Aura; slow shotguns are usually a problem for me. However I found Nader to be a blast, and very effective; especially once I unlocked one of her bronze cards. During a match you will have the ability to change between your squad members every time you die, so chose mercs you can suit to your style.

One thing about the scoring that I found interesting is that during the match you can’t see your kill-to-death ratio. All you have is a point accumulation to look at while fighting. After the match ends however, your K/D ratio is revealed; in my case it was often abysmal. In my mind this keeps it less stressful when you die. You are going to die. Many times. Just get back out there and frag some more. The kill ratio doesn’t seem to affect payout as much as getting objectives done. Pummeling your opponents with gun fire is essential, but you get more points by repairing the EV, reaching a checkpoint; even defending a target will earn you a far higher score. Just standing inside a target destined to be blown with C4 will earn 10pts every few seconds, for example.

So far there’s only a few things I don’t like about the game. First off there’s been too many instances of cheaters ruining the game for my liking. It’s hard to combat that sort of thing; the game is still unreleased to be fair, but in 4 hours I encountered at least that many obvious cheaters. Mostly wall hacks, but there’s been some questionable aiming as well. Hopefully Nexon will have ways to deal with the shitbags by the time the game is fully released.

The other thing that I find frustrating is that it’s hard to get your feet off the ground. The loadouts that you start with, mixed with the limited selection of mercs at the beginning, make it hard to compete online. I found myself getting wrecked until I spent some coin on cases. Bronze loadout cards seemed to be where the action really started to pick up.

So far I’m very much enjoying this game. It’s been a long time since a proper twitch shooter caught my attention. Considering the game will remain free-to-play, I expect I’ll be jumping in this one often over the next few months. Look for my full review once the game is fully polished. In the mean time, go fight dirty!

Kevin Carbotte is a Content Editor for aybonline.com. He knows a little about a lot, and a lot about a little. The opinions in his columns are his and his alone, but you are free to have them.