BASELine: Core Element — My Time in the Alps 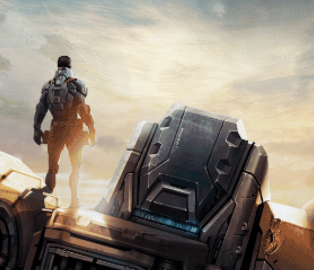 What do you get when you cross Plants vs. Zombies with Front Mission and Mass Effect? An ambitious and complicated mess.

Core Element is a free-to-play mecha sci-fi tower defence RPG squad management game, available on the Google Play store for Android devices. That’s a mouthful, and to be honest, it’s a lot to take in. The game is ambitious in its scope and delivery – it has beautiful art, and while it attempts a sweeping space opera narrative, it bites off of the likes of Halo and Mass Effect but never reaches the same level of confidence or quality.

The story takes place aboard a ship called the Alps. There’s some back story about an alien race that enslaved all humans, but we broke free after learning about sweet mechs that wreck house. I’ve spent quite a few hours with it over the last two weeks, and it feels like most of my time was spent in a tutorial, to be honest.

Hazards like meteor showers will rain down every so often, and you react by tapping the screen. You can also activate special abilities from the gunship to do things like clear an enemy lane, repair your mechs, or pull them out of harm’s way. Your mechs themselves also have special attacks that you can activate, complete with anime-style one-liners like “Feel my painful rage!” Aside from these special abilities, the core elements are pretty simple (see what I did there).

Therein lies my main criticism of the game. There’s a lot of hand-holding in the tutorial for a core game that’s so simple. It literally walks you through every single element of the game step by step (although to its credit, it does a decent job wrapping the tutorial into the narrative). I feel as if the only reason the tutorial is even needed is that the basic UI design is abhorrent. I don’t say that lightly. The menus look great, but everything you need to do is buried in deep submenus, making the management aspects of the game unintuitive and time consuming. It doesn’t help that the game is chock full of so much sci-fi jargon it could make a fan-fiction writer blush.

Honestly, it wasn’t until my third day playing that I even encountered the in-game store, and that’s not for lack of trying! I searched every submenu to try and find the in-app purchases strictly for the purpose of this review. Even after finding it, I don’t quite understand the microtransaction system. Like with the UI, there are so many different resources, loot drops and equipment types that they’ve milked for microtransactions that it becomes hard to even navigate.

As best as I can tell, you buy something called VIP points, which earn you something called “Argisen Essence”, which you can use to build factories to build equipment. You can grind for this resource, or you can buy it directly (though I don’t know why you would).

VIP points increase your daily fuel amount (so you can play more story missions). They also increase the number of PVP raids you can join, and give bonuses to your PVP abilities. Speaking strictly from a single player point of view, the fuel recharge rate never got in the way during my play sessions; I never found myself locked out of playing the game, and having to grind for equipment was a pain, but it was serviceable. However, from a PVP point of view, this wrecks the balance completely.

Other upgrades and abilities require yet another resource that you can purchase, called Pallar Points. This one is a little easier to grind for, but some of the equipment factories can cost hundreds of thousands of points, and frankly I just don’t have that kind of time.

While the gameplay is simple, any depth the game does have is hidden behind an incomprehensible interface, and resource management system milked for microtransactions. With a complete overhaul to the UI design, along with a PVP rebalance and a bit less of a push for microtransactions, I might give it another shot. In its current state, it’s frustrating, slow and imbalanced. With its run-of-the-mill story filled with sci-fi schlock, and complete lack of gameplay depth, I simply cannot recommend this game. The art looks great though.

Core Element can be found on the Google Play Store following this link.

Jake Carewick is Senior Editor, Indie Games for aybonline.com. His opinions are his own.