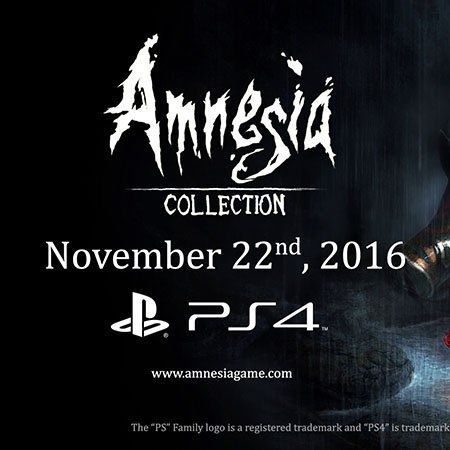 In spite of my love for playing horror games, I somehow never got on the Amnesia train when it was big a few years ago. I also wasn’t as huge of a PC gamer then as I am now. But for those who prefer the console route to enjoy gaming, Frictional Games has released the whole collection on PS4 — including not only The Dark Descent, but its DLC Justine, and the indirect sequel, Machine for Pigs.

Because I had never played the PC version before, after delving into the PS4 collection, I felt I had to download and see how Amnesia compares between the two versions.

In the important ways, Amnesia carries over to the PS4 quite well. There is always this pissing match between PC gamers and console gamers regarding graphics, but to be honest — there really isn’t much of a difference! The PS4 renders the environments beautifully, and particle effects like dust and mist animate smoothly with little to no performance lag.

The Amnesia: Collection on PS4 also maps its controls rather intuitively from a console gamer standpoint; however, one issue I do have is regarding how precise your cursor has to be when attempting to pick up any objects, as I found myself a little frustrated with how long it would take me to pick up important things like Tinderboxes with analog sticks. Even if I was a small fraction off, despite me seeing the cursor change, it would not allow me to pick it up.

In its defense though, Amnesia was first released on PC, and it is much easier to be precise on where your cursor and mouse goes, rather than trying to direct it with an analog stick, which isn’t always precise. Still, it can be frustrating, especially if you’re at risk of being discovered by a monster.

Of course, there are some slight differences I experienced between the two versions, which I don’t think is a huge deal, but it surprised me nonetheless. In the PS4 version, I found myself struggling to keep a good stock on Tinderboxes and Lantern Oil– and as many Amnesia lovers know, our fearful protagonist, Daniel, suffers from nyctophobia, a severe fear of the dark.

When Daniel experiences frightful moments or is in the dark for too long, his Sanity depletes. Sanity is an important component to the game as the more you lose it, the more susceptible Daniel is to hallucinations and also being discovered by monsters. Being in the light or solving puzzles replenishes Daniel’s confidence and Sanity, so it’s a fine balancing act in some situations. Tinderboxes and Oil for your Lantern help; however there weren’t nearly as many of these in the PS4 version as there were in the PC version. And this wasn’t a result of me not looking hard enough or quickly bypassing a room to progress — I searched high and low for these suckers.

That may not sound like a huge deal, but it definitely adds a challenge when playing the PS4 version, and I’m curious about why those changes were made.

It should also come as no surprise, as well, that the PS4 version does not give you the option of a Custom Story. I’ll admit, when I launched the PC version to compare for this first impressions review, I saw “Custom Story” in the menu and thought, “What the hell is that?” But this is, of course, where fans had the chance to create and upload any mods or changes to make Amnesia as scary or as ridiculous as you want it. Naturally, the PS4 version does not allow for that. Maybe someday…

One thing that I regret not doing when playing the PS4 version, is hooking up a headset to my controller. When playing the PC version, I didn’t realize just how directional the audio and atmosphere can be. I harp on in past horror game reviews about how important these components are, and yet I broke my own damn rule. From what I could hear from my TV, the sound was okay but I know that the experience would be so much grander with that atmosphere in my ears. I’ll remember to play the rest of The Dark Descent and the other content with headphones on. Bad, Kate, bad.

Kate Rhiannon is a Contributor and Twitch Streamer for AYBOnline.com, and co-host/producer of AYBTV Live. Her opinions are her own. Feel free to follow her ramblings and creative projects on Twitter, Instagram, and Facebook!