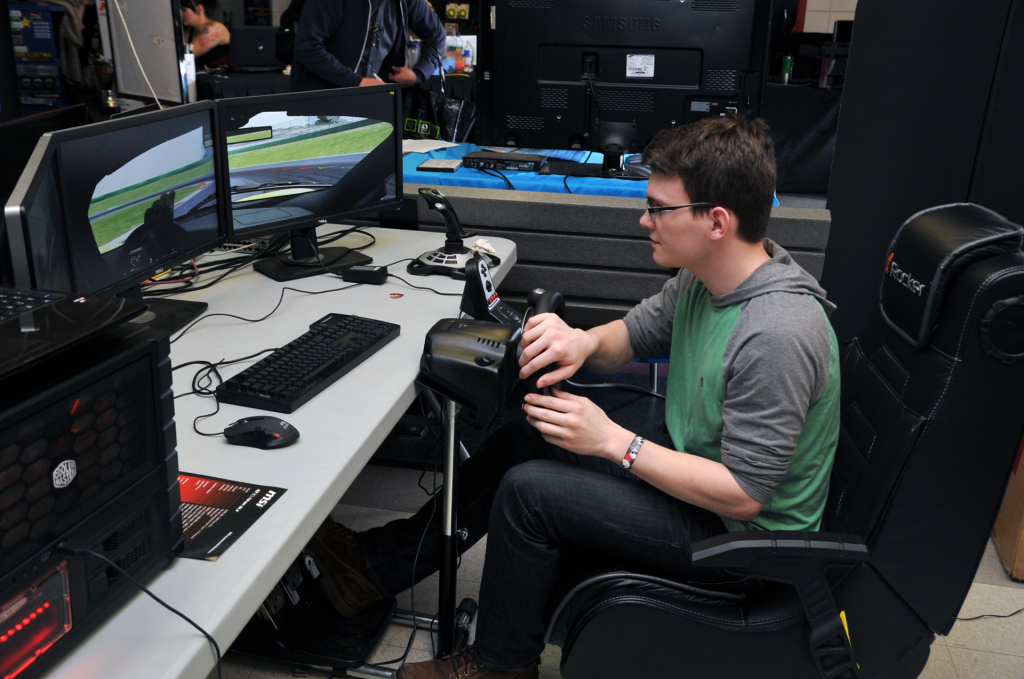 Today in the Demo Zone we held a racing simulator tournament.

Players tried their luck at running the best time in Assetto Corsa. Running 5 laps on Valelunga Club raceway in a Ferrari LaFerrari proved to be quite the challenge.

Among the 18 competitors there were 3 clear winners. Before I started the race, I ran a lap of my own. Considering I’m a seasoned racing gamer, and own a wheel of my own, I figured players would have a hard time matching my sub 5-minute run and assumed the average would be closer to 5 minutes, 30 seconds. My prediction was surprisingly accurate with only the top 3 racers joining me.

For most of the tournament it looked like Sam C. was going to take the top spot. He laid down a 4 minute, 55.482 second run, and he was only the 6th player in the track.

There were 7 more racers before Owen showed up. His run was so close, at first I thought he might be the new winner. He ran 4 minutes, 55.719 seconds.

It really looked like no one was going to top these two excellent drivers. Even Spongdangly and Lawlerskeeters — typically two complete shoe-ins for racing games around here — weren’t able to match these times, both having runs in the low 5-minute range.

Sadly for Sam and Owen, Patrick decided to play at the last minute. He had been watching for over an hour, and had said he’s no good at racing games multiple times throughout the evening. At the last minute, right after I made the announcement for last call, he decided to give it a whirl. Frankly, he couldn’t have made a better decision, as his time simply destroyed the competition. Our champion racer managed an amazing 4 minutes, 48.467 seconds.

Congratulations to our three winners, and thanks to everyone who gave it a shot!