Back In My Day: a Rant 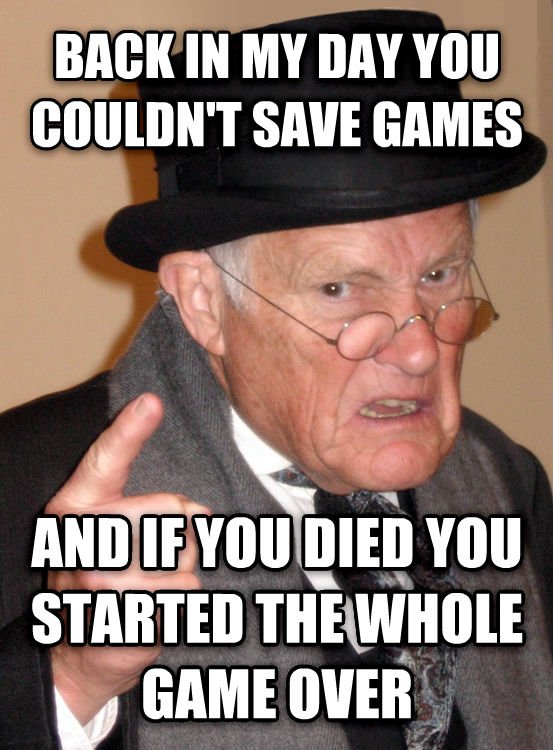 This morning when I was deciding what to write about, I had to ask my editor “Jesse, exactly how off topic can I go?” Well kids, daddy gave me the keys to the Ferrari, so buckle up, this one might get bumpy.

If someone asked you to describe yourself using only three single-word answers what would they be? How many of you, like me, included some version of nerd slash geek slash gamer slash whatever? You got three words to describe yourself, to tell somebody, who has no idea who you are, what you are all about and what you think of yourself, and you went with “I like games.” It truly means so little and yet we choose to identify with it. Considering until recently the word had a serious amount of negative connotation attached to it, it’s a fairly drastic swing. We are a new generation raised on connectivity, accessibility, and abundance, and we are NOT the same as the generations before.

If you can remember when your parents first got a colour television, this article almost certainly will not apply to you. If you barely remember the sound of your dial-up connecting to AOL so you could play Warcraft 2 and rush shamans, you are right in the sweet spot of what I’m talking about. We were still young during the advent of online messaging and, shortly after, text messaging. When our parents wanted to get together with their friends, they had to make plans well in advance, and most importantly KEEP THEM. To cancel they had to phone their house (yes people used to have phones there) and hope they were home, and if they weren’t they would try again at a later date. When I make plans with friends to go out Friday night, I decide Friday if I’m going to go, and if I don’t want to I just text them. I never make definite plans in case something more appealing comes along. It’s pretty standard fare these days and it affects our entire life: we, as a generation, have commitment issues. Divorce rates are up, job turnover rates are up, Ashley Madison subscriptions are skyrocketing, and overpopulation of unfinished games in Steam libraries is astronomical.

Now, you may be asking yourself, “Did he just compare my Steam library to my crumbling marriage and impending divorce?” You bet your ass I did, and it’s truly not a huge leap. When our grandparents hit a rocky spot in their marriage, they would work that shit out. If I buy a game on Steam and its not amazing, I likely don’t get more than ten hours or so into it. Now, more than ever, accessibility sells games. League of Legends and Hearthstone are two fantastic examples of this phenomenon in full force. Both have deeper and more skill intensive direct competitors in Dota 2 and Magic: the Gathering, respectively, yet both are insanely popular and making unprecedented amounts of money. Jesse wrote a great article on how to manage the unplayed games in your Steam library, but I’ll tell you what, my grandmother doesn’t have ANY unplayed games in her Steam library. Sorry, a joke there to lighten the mood a little. Seriously though, my dad plays Solitaire incessantly, and I always tell him, “Dad, there are better games than Solitaire that I can get you for free in an instant,” and he usually responds along the lines of “I like Solitaire. I know Solitaire. Solitaire works good enough for me,” and that mentality I think is the core of the difference. He knows how much he enjoys Solitaire. He knows that every time he plays it he will get the same level of enjoyment as he did yesterday and he’s content with that, whereas I am always worried that that next game is going to be better than the one I’m currently playing. Now, I have probably found some games that I enjoy more than my dad enjoys Solitaire, which explains why I was watching The International 5 finals on my phone at my friend’s wedding, why I cheer on Leffen at EVO, and why I still watch proleague replays every week (I’m watching S2SL replays as I write this), but I always seem to take them for granted.

My dad popped the question to Solitaire at a young age and is happily/contently married to this day. I on the other hand found an amazing girl who does this crazy thing with her tongue when- ahem, but I’m always worried that that next game I saw walking down the street was going to be a little bit crazier, a little bit more fun, and a little bit more exciting. Every time I come crawling back, and thus far, she has accepted me with open arms. One day she won’t, and all I’ll have are memories and regrets, and some really big shoes to fill.