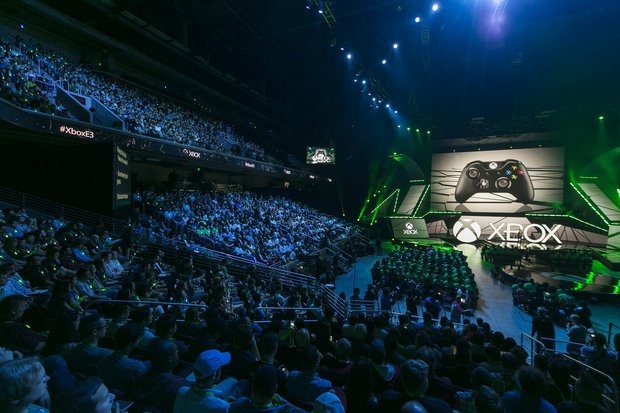 But seriously, though. E3 2016 has come and gone, and it contained a newsplosion that will shape the gaming industry in the next couple of years.

Kojima is back, with Sony giving him the budget and free reign Konami never felt comfortable doing; Kratos is back, looking like a dead ringer for AYB’s own Orion; Call of Duty is back, in space but never more CoD-like; Microsoft has announced the XBox One S and Project Scorpio, which hopes to push VR into the living rooms by making a VR-ready box accessible to everyone.

We asked some of our writers and streamers what they thought of E3 2016, and here’s what they had to say:

1. Which announcements excite you the most, and why?

Zappedz, AYB Community Streamer — The announcement for Legend of Zelda: Breath of the Wild had the biggest impact on me — my childhood nostalgia helps! It looks completely new from how traditional Zelda games are always set up, but at the same time, it looks like it stays true to its roots, too.

Dandr0id, Contributor — I think the most exciting thing for me was the release date for The Last Guardian. I was waiting for it, and I knew Sony would have to give it to us this year or they would have a riot on their hands. And it was nice for Sony to follow through on the new God of War with not just a trailer, but an actual gameplay demo live at the show. That was huge! And they finally admitted that they were working on bringing Crash Bandicoot back, after years of teases.

Mark McAvoy, Contributor — Rare showed off some of the gameplay of Sea of Thieves, and this multiplayer pirate adventure looks super fun. The best online experience is yelling excitedly with friends, and I can only imagine how much of that will be going on when you have to assume various roles on a vessel and survive the high seas.

Kevin Carbotte, Hardware/VR Columnist — It’s a toss-up between two announcements. Serious Sam VR combines two of my most favourite-est gaming-related things, but Quake also had my jaw on the floor; Quake 3 Arena holds a very special place in my heart, and I hope this game lives up to that feeling. I yelled a very loud expletive that was likely heard by my neighbors when Serious Sam VR was revealed, but I was stunned beyond words when I saw the Quake logo on screen.

Kelvin M., Contributor — The 50+ VR titles for PlayStation and the Xbox/Windows cross-play announcements were my favourites of the show. To me, these announcements advance the industry; by closing gaps between the console and PC markets, in the case of Microsoft’s cross-play push, and by showing how strong the industry support is for a new field such as VR. In particular, I think consumers will get an amazing experience from VR, as the tech has advanced so far in recent years, and the immersion level is now so high.

2. What was the biggest disappointment, in your opinion?

Kevin — The announcements of VR “experiences” disguised as AAA content. Doom VR is not a game. Neither is the Final Fantasy XV experience. Even the Batman Arkham VR experience is just two mostly passive levels, not really a full game.

Kelvin — I was hoping to get a little more of a tease for Nintendo’s newest hardware.

Zappedz — Bethesda had a really amazing show last year, but this year, it felt kind of dry in comparison.

Mark — Okay, that Project Scorpio video was weird, right? You all seem very nice, but it’s hard to trust a montage of people who work on a project telling me how amazing it is. (Also, “teraflops?” Hilarious!) I should also mention the Days Gone trailer; I checked out after the very first line. “Someone asked me once if I remember how it all went down.” Oh, geez. This again? No thanks, I’m out.

Dandr0id — Even though the new Zelda game looks epic, Nintendo had basically nothing to show beyond Zelda and some new Pokémon footage. I was really looking forward to maybe an announcement or a tease from one of their beloved series, like a new Metroid or F-Zero game. And with all the hype around the Sony conference, it would have been nice to see a glimpse or hear some stats on the new PlayStation Neo system they are working on.

3. What game is going to be the water-cooler discussion topic this coming fall/winter? Why?

Mark — The Last Guardian. We can finally play what is sure to be a masterpiece on October 25.

Kelvin — For the fall/winter line-up, there are tons of releases to talk about, including a lot of the VR experiences. Ultimately, I think we’re going to be talking about the return of classic FPS IPs such as Quake and Serious Sam.

Zappedz — From the line-up I saw at E3, I don’t really see myself playing anything other than Pokémon and Final Fantasy.

Kevin — It’s not a game, but I think a lot of people are going to be talking about PSVR this fall. Some of the announced content is garbage according to early hands-on reports, but many of the titles are going to be excellent experiences. I’ve also had the chance to try PSVR, and I think the quality of the hardware is really going to surprise people.

Dandr0id — There was a ton of new flavor at the show this year. Between Zelda: Breath of the Wild, Horizon: Zero Dawn, the new God of War, ScaleBound, Death Stranding, Detroit: Become Human, Sea of Thieves, and South Park: Fractured But Whole, I’m honestly super happy that we can spend this fall talking about news from all these new IPs, and we don’t have to talk about another Assassin’s Creed game.

4. What was the best trailer?

Dandr0id — In all of its weirdness, I think Death Stranding was one of the most striking and interesting trailers of the entire show. As far as gameplay trailers go, I think the God of War gameplay was absolutely awesome and a great surprise. And Horizon: Zero Dawn is looking better and better every time we see it.

Mark — It’s a tie between Detroit: Become Human and Death Stranding. Both had magnificent trailers! It’s impossible to choose which is better: naked Norman Reedus in a Hideo Kojima game, or Quantum Dream’s new neo-noir choose-your-own-adventure about androids.

Kelvin — Dead Island 1. … But in all seriousness, Death Stranding had a great trailer; great music and the right level of, “WTF is going on, I need to know more!” And I don’t know if Resident Evil 7 counts as a trailer, but it was one of my personal favourite surprises.

Zappedz — Legend of Zelda: Breath of the Wild gave me chills watching it.

5. Which VR development will you be following the most?

Kevin — Though I’ve never cared for the Fallout series at all — and I likely still won’t play it — I’m very curious to see what Bethesda does with long-distance travel in Fallout 4 VR next year. It’s the first AAA shooter title announced for VR, and there are many things about Fallout‘s mechanics that don’t play nice with VR. The solutions that Bethesda come up with could define how story-based first person games will be played in VR.

Mark — Minecraft VR. I never even thought about riding a rail car in virtual reality! Oh, that’s neat. I want it, I want it! Also, I want that world they were playing in. How come I can’t build like that?

Kelvin — The Resident Evil and Fallout announcements. After hearing that the studio is intending on bringing Resident Evil back to the survival/puzzle focus it once had, I can’t help but be excited for another horror VR game in one of my favorite video game universes. As for Fallout; who wouldn’t want an open-world VR wasteland to explore?

Dandr0id — I don’t think there’s anything in particular I can focus on yet, because we are still so early in the life cycle of VR. Developers are still exploring and figuring out how to make proper VR games. So I’m just excited for anything that is a new and interesting experience.

6. What’s something that OH MY GOD we have to talk about?

Kelvin — Did anyone else get a little bothered that when Hideo Kojima was walking down the stairs, he was walking faster than the light cues?

Dandr0id  — One of the most overlooked trailers of the show for me has to be Gravity Rush 2. It was silently included on the showroom floor and had almost no media coverage, but it is honestly one of the most unique-looking new IPs coming out, and reports from the floor are saying it plays as good as it looks.

Mark — Please let me listen to Miyamoto talk forever. Nintendo forewent the traditional conference and instead held two days of live game streaming, and when the developers were on, it was a delight. Also, Recore. Adorable robots and a killer song in the trailer? Sold. The platformer elements here look great. And grappling hooks are fun.

That’s it, folks! Next up: PAX Prime.

With contributions from Zappedz, Kelvin M., dandr0id, Kevin Carbotte, and Mark McAvoy, each of whose opinions are also their own.