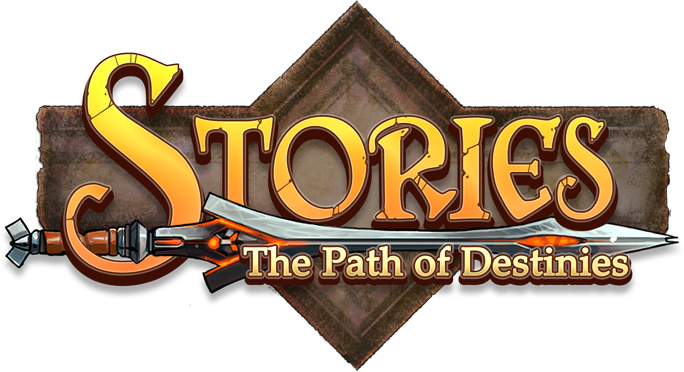 Stories: The Path of Destinies, developed by Spearhead Games, is a game that came out of nowhere to little fanfare and little marketing. It just appeared one day, but when it did, it came to great acclaim. Many people love this game, and I decided it was worth checking out, even if it seemed a little silly and cartoonish.

First off, Stories is not an ordinary game: it is a top-down, action RPG/choose-your-own-adventure book. Confused? So was I — at first.

The game starts with Reynaldo (whose role you assume throughout the game) trying to keep the child of a woman he loved out of danger. It fails in a spectacular fashion, but he does end up getting a book that the child was keeping safe. After that, several years pass in a blur and you are presented with two options.

That’s about as much of the story I can spoil for you as the choices and what happens in the choices are the greatest part of the game. Each choice will give you a different story, and I honestly have no idea if  you get the same options no matter which story you choose. I will have to play through it entirely in order to find out — and then play it again.

The story itself is presented by an omnipresent narrator, very similar to the style of Bastion. He narrates everything you do, from the story to the conversations between characters. I think it’s all one person, as some of the voices that he does make it seem like entirely different people, and there could entirely be new ones later on, as I’ve only played a few hours so far. He is one of the best parts of the game and the humor is incredible. I once made the mistake of drinking some water while playing and almost ruined my keyboard.

The art in the game is very colorful and almost seems hand drawn. To be quite honest, I was too distracted by the pretty views to examine them too closely. It is an incredible fit to the aesthetic of the game however, and nothing that I’ve seen has ruined the atmosphere for me. Everything in the background is beautiful and the character models are very well done, if a bit cutesy.

In the few hours I’ve played, I haven’t encountered much diversity in enemies, but I’m hoping that will change as the playtime goes on. The characters in the game are all anthropomorphic animals, and even though that fact was the reason I was very hesitant to play this game, Stories makes it work. The names of the characters are sometimes silly puns making fun of the fact that they are animals (like Lapino the Bunny), and at other times they are just normal names.

The combat in this game is very strange though. It handles like the Arkham style of fighting: choose a direction and hit X and your character leaps to hit them. There is even a scoring system like the Arkham games. It’s a little bit unsettling at the beginning, but it does work for the game. There are multiple different weapons, though at my current time I haven’t discovered many of them yet.

All in all, everything I’ve seen from this game has me wanting so much more, and I will play this game all the way through. This is a game I will stick around for. It’s funny, well written, and the gameplay is fantastic.