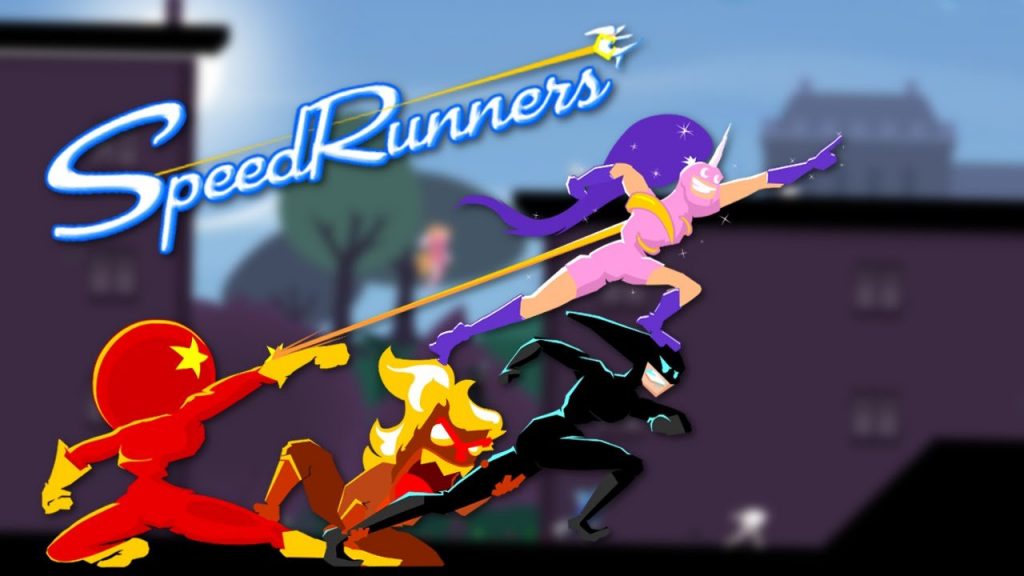 Speed running: The art of attempting to do something the fastest it can ever be done. It’s a neat concept but not one I ever felt great interest in trying. As it so happens I’m happy to report that while that attitude stands, I have a great deal more respect for those who do it after playing SpeedRunners.

Developed by DoubleDutch Studios, SpeedRunners started as a free flash game, but underwent more serious development and the game was released into Early Access on Steam on August 26th 2013. After many years of tweaking, updates and favorable reviews the game released out of Early Access April 19th of this year. So is it worth it now that the game is finally out? To that I can only laugh and give it a resounding YES.

The game feels like a Nintendo Product: It’s the kind of game you can pick up and play with your friends anytime for some laughs and great fun, but also stays true to the phrase “Easy to learn, hard to master.” It’s a breeze to start running through the maps, trying to go fast enough or use power ups well enough to force your friends off the screen to their doom but the real challenge is in getting the many shortcut hidden in the map. Some of those shortcuts are gambling maneuvers, because if someone is faster than you your shortcut closes off and you just wasted time and have fallen behind. Of course you can try to catch up with Mario Kart style power ups sprinkled around the course, which can do everything from just slow an enemy down to pull them back towards you while launching yourself forwards. Like all games of skill however, every power up has a counter, for the golden grappling claw I mentioned above the counter is to slide under the hook, which doesn’t change the fact it’s essentially this game’s Blue Shell. You might’ve noticed I’m comparing it to Mario Kart a lot, that’s because the game plays like a cross between Mario Kart and Smash Bros. You race your friends through a bunch of maps which all have a theme to them (Metro, Mansion, Factory etc) while trying to force them off the screen to kill them. It’s a beautifully simple game, but the depth is added to tremendously when you add random game rules, like making all the power ups the golden claw, or giving everyone unlimited boost, or my personal favorite: Mirror mode. Sure you get used to running the course a certain way, but mirror mode makes it a completely different map for strategies. The map’s are varied enough that you can do every lap differently, and with steam workshop support you’re not going to be left wanting for maps for a long time.

The last thing I’ll cover is the story mode, it’s a collection of levels that introduce and unlock new (and goofy) runners. It frames the game as superhero story, right down to unlocking comics when you beat a story for the first time. It’s not much compared to multiplayer with friends or in ranked (where you see the best of the best shine and make you eat their dust) but it’s great for learning the game.

So while this is by no means the definitive guide to the game, I can safely say SpeedRunners has more than earned it’s place among my favorite party games of all time. I can virtually promise you that the game will manage to surprise you and force you to think on your feet to improvise. In short, it’s a great game and for 15 bucks it’s well worth it.

Speedrunners is out now for PC, Mac and SteamOS and if you’re interested in the game you can find it  here.