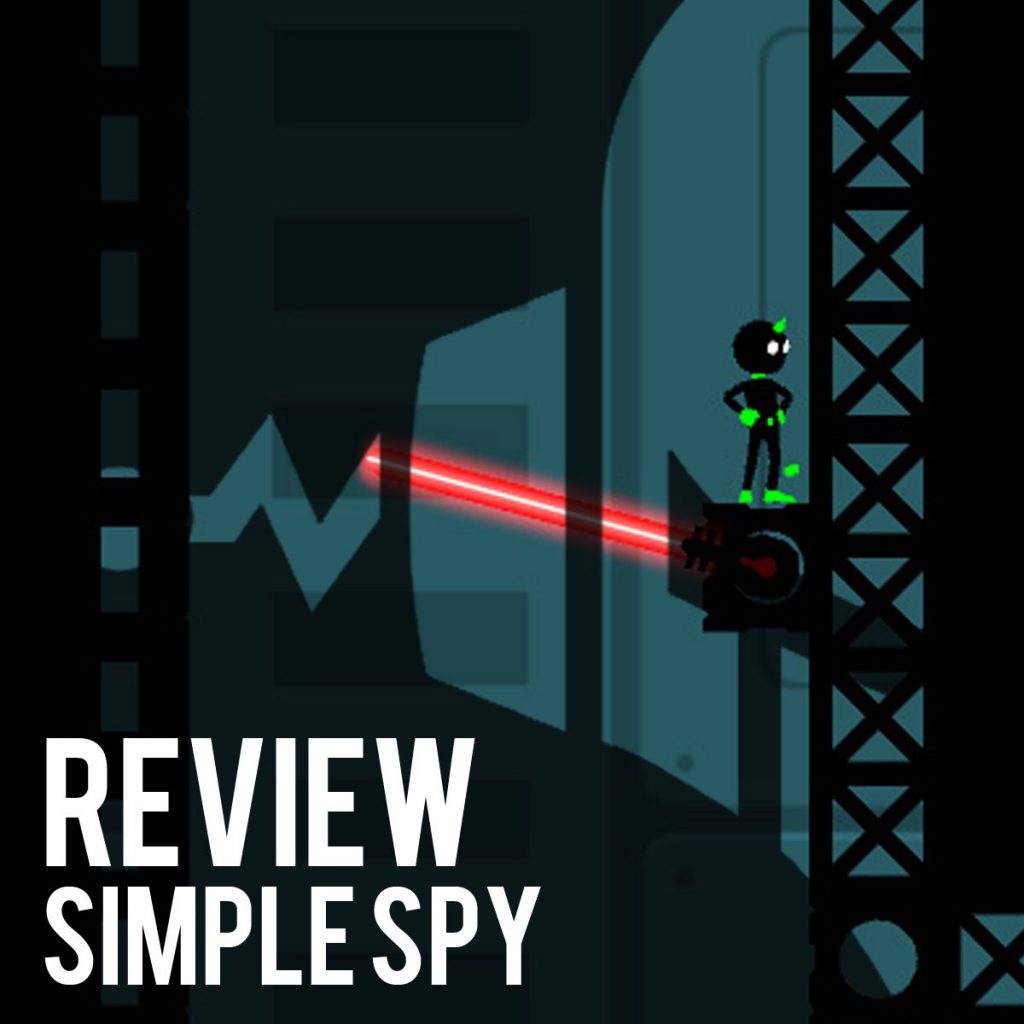 Normally, when someone mentions a game with the words 2D, platform, or spy in it, it will pique my interest. Unfortunately, all of those ideas combined cannot save this game from being a bland stroll through an oddly over-secure industrial complex. Simple Spy isn’t just simple, it’s basic.

The look and feel of Simple Spy is the same silhouette design you’ve seen a hundred times already in modern 2D games. It’s a mostly-black foreground and character with a simplistic coloured background to add depth.

I honestly have no problem with this aesthetic, but the issue is it’s been done so many times that I think unless your game really makes use of that look, you really shouldn’t have it in the game. For example, Limbo uses this aesthetic perfectly, as it’s a suspense horror game about being alone in the dark with as a scared little child.

If Simple Spy wanted to use this silhouette look to it’s advantage, I feel like it should have been based more on sneaking around and playing with light and dark as an obstacle. What you actually get is game objects coded in Christmas colours over a single-colour background tone that changes with each zone. Anyone playing the game will immediately get the idea: green = good, red = death. This works in theory, but in practice, unless there’s some other stuff to accompany that, you just end up looking at a bunch of red hazards and wandering through them until you reach the end teleporter.

Most of the levels just end up feeling empty and oversimplified. Your only objective in every level is to find the exit teleporter, but if you’re feeling adventurous, you can also look for keys in each level which you can collect to unlock five different skins for your spy. I actually got excited at first, because I figured maybe they all have different skills or abilities that will add some flair to the game, but no, they are just skins with slightly different run cycles.

So what is this Spy even doing?

He’s certainly not spying on anything. I like the idea of a spy risking his life avoiding traps to achieve a goal, but unfortunately it’s just been done so much better in so many other games. This game plays very little on its so-called “spy” name — it could’ve been called Industrial Speed Run Man and it would not change the feel of the game at all.

Ultimately, this game has nothing to do with spies or spying, and everything to do with speed running. Each level is designed with speed in mind… but even that falls kind of flat when most of the level designs are disjointed and mismatched. I found myself becoming very frustrated with many levels that had a clear path from beginning to end, but running as fast as I could only ended with me dying at one point or another because the movement of the traps and laser beams just didn’t match up with the flow of the level.

There were even a few levels that had slightly different variations in timing on certain traps, even though I would start moving at the same time at the start of the level, which caused the flow of the level to be off and turn some areas into impossible death traps instead of tests of skill.

Fortunately, there were a few levels that did keep a particularly speedy flow to them, and they were actually pretty fun to run through.

Another major issue with the traps, especially the saw blades, was the hitbox detection. When a game focuses on only having a handful of obstacles, it really should have the hit detection on those items down to a science, and that’s without factoring in how the spy’s controls handle.

I think the Spy accidentally wore his buttered boots this morning…

Honestly, a game that bases itself on speed running and avoiding obstacles has one major goal that must be met before anything else can happen with the design. The controls must be tight! Tight controls make or break platforming games, and I guess this spy didn’t get the memo.

Even if the hitbox detection is a little off, it can usually be corrected by controls that allow you to jump or turn on a dime, but in Simple Spy, it actually feels like you’re wearing buttered boots. Whether you’re accelerating or decelerating, the spy just has a few split seconds of slide in his animation that adds an unnecessary level of difficulty to the game. If you want to make the game harder, design better traps, do not give the player bad controls.

Along with the loose movement controls, this spy does not seem very adept at jumping. I found myself many times trying to jump off of timed platforms or wall-jump to safety, only to have him just ignore my command and fall crotch-first onto a saw blade.

The game also has an odd mechanic that I’m guessing is supposed to help you get through the level faster, but it ended up killing me more than helping me. Whenever your spy gets into a good flow of movement and you jump and land, he’ll seem to get a bit of a speed boost. But it doesn’t always happen, so you can never really determine when it’s going to happen. This seems like something that maybe should have been left out, or possibly activated with another button.

And if the loose controls and lazy jumping weren’t enough, it’s all tied into very poorly-executed controller support. The game supports the keyboard 100%, but will not let you remap any buttons. So I decided that if I can’t remap anything, I’ll try playing with an Xbox controller… and I don’t know which one was worse. Because of the partial controller support, the Xbox controller has to be wired or else the D-pad does not work, and no, you cannot use the analog stick at all. And for some odd reason, they mapped the crouch button to a face button instead of the down on the D-pad.

So both the keyboard and controller had their faults, but I ultimately went with the controller, because the D-pad at least gave me fast reaction times in controlling the spy’s slippery, buttered boots.

This is one Spy that needs to be blacklisted.

As a whole, Simple Spy honestly feels more like a Ludem Dare runner-up than a finished game that you’d pay money for. The silhouette aesthetic is just too simple here, and doesn’t add anything to the game. The colour palette is bland, and the music is a handful of simplistic 30-second techno loops that become incredibly repetitive.

Overall, the game is just uninspired. There’s a few levels here and there that get the formula right, but they are over so quickly that they are mostly forgettable.

If you are a hardcore speedrunning fan and need to get your fix anywhere possible, you may enjoy it more than I did, but for the average gamer, your money is better spent elsewhere.