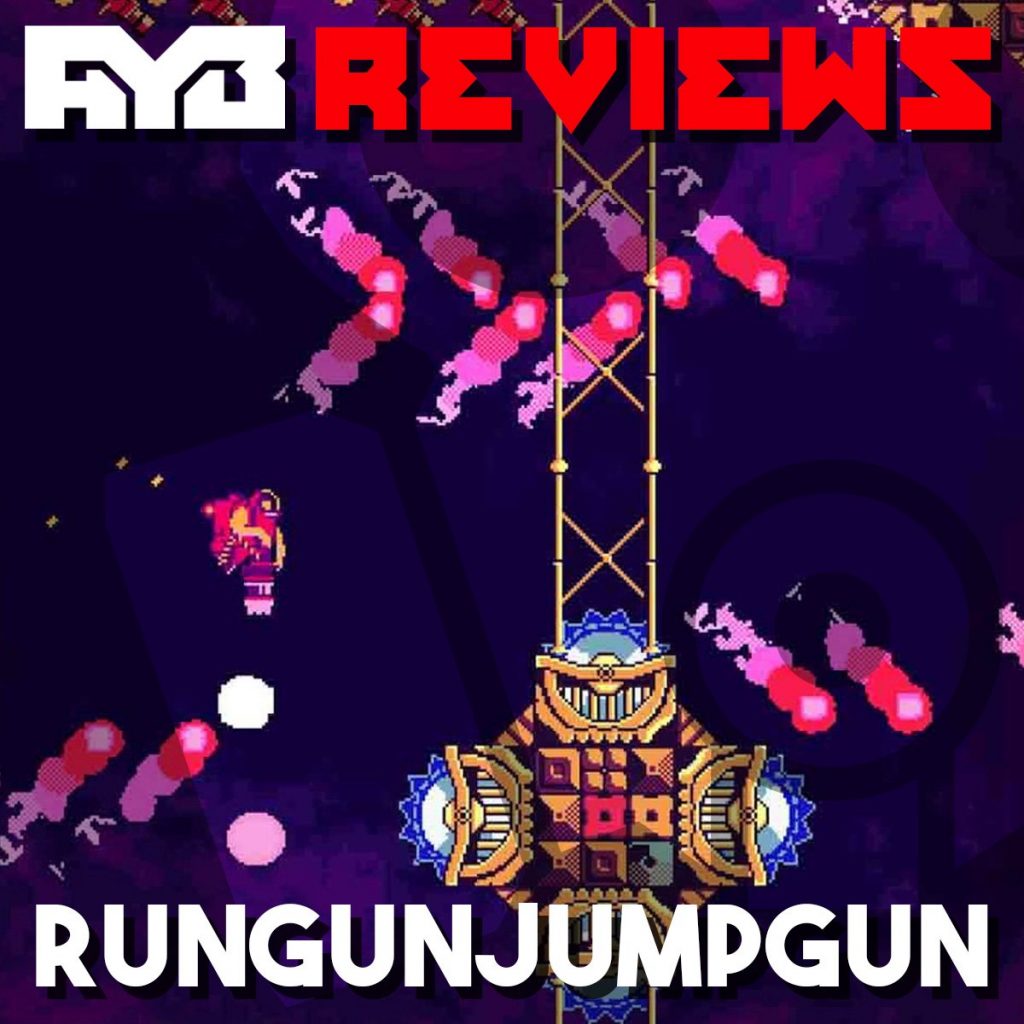 Do you like hard games? Do you like it when those hard games are set on hard mode? And just then, you realize when you’re playing on hard mode you’re also in the middle of a rave with insane music blasting your ears and every color known to man invading your eyeballs?

Now take all of that and turn it up to 11 and you’ll start to understand what RunGunJumpGun is putting down for you. This game is next level runner insanity and truly needs to be played to be fully understood. It is absolutely in the realm of easy to play, impossible to master and it definitely has some of the most rage-quit worthy moments of my gaming career this year. The visuals and sound are mind blowing and on top of all that, it actually has a story

Who is this colorful gentleman and why is he yelling at me?

One of the most apparent and awesome factors of this game is the visuals. If you have ever laid eyes on a Hotline Miami game, you will instantly recognize the art of one El Huervo who helped create the key art for the game. His mixture of crazy and colour really help the story come to life in small one-line dialogues from interesting characters. So when the game starts, you’re already in the mix of it.

Basically the greed of a bunch of tycoon aliens has cause the sun to start going nova and begin to swallow planets. While this chaos is going on, you are blasting your way through ravaged planets to collect Atomiks to make money or something. Apparently they are valuable but you’ll be way too busy dying to worry about money.

As you progress through the levels, you’ll travel to new areas of the dying solar system and meet an ever growing cast of characters. This is actually one of the few shortcomings of the game. With a fairly interesting story and rich looking characters, I really wished that I could have spent more time with them. I appreciate the wacky pixel art between levels, but I really would have loved to see some cut scenes, or at least a moving story board showing more of these characters and what they are doing while the world falls down around them.

They actually have a beautiful little motion comic on the game’s website explaining the initial story and you can check that out right here. But all of the awesome character and story stuff aside, what’s a runner game without the tightest controls known to mankind.

This guy can shoot on a dime

This game would not be the same if it had sloppy controls. It seriously wouldn’t, especially because it only uses two buttons. That’s right; they went with a two button control scheme to lure your unsuspecting mind in with an easy premise. Honestly the two button setup does what it says on the box. One button allows you to shoot forward to destroy obstacles in front of you and the other button allows you to shoot down to jump. “Jump” is a bit of a loose term, it acts more like a jet pack.

Now a huge saving grace to this control scheme is that they allow you to map your own buttons. They originally had it setup so that the left and right shoulder buttons were jump and shoot. This setup tore through my fingers and patience in about five minutes of play time so I switched over to a more classic shooter style with two face buttons for jump and shoot. I found the face button to give me much faster response time and much less hand fatigue.

Now, with that being said, the game plays extremely well for only using a two button scheme. Levels are very well crafted for simplicity and having less things to do really allows you to focus on what’s happening in the level in front of you. But being a big 2D shooter fan, I found myself getting very frustrated at times with situations that could have been avoided if I could have just had the ability to shift a little left or right to avoid a pesky laser shot or saw blade.

The game was clearly built from the ground up for two buttons only and it does a great job, but I found myself wanting a little more finesse in my movement. But that gripe is mine and mine alone. It really is a sight to see what can really be done with two buttons when it comes to moving through the gorgeous hectic levels in this game.

Coming up next! Lasers, saw blades, and deadly, deadly spikes

Like most 2D adventures, you’re worst enemies tend to be things of the pointy and burny variety and there are a ton of them in this game. It does a great job of mixing and matching obstacles very well to bring a sort of balance to each level and theme. With games like Super Meat Boy, the entire game is covered in salt and saw blades. And usually the game gets harder by throwing more salt and more saw blades at you. RunGunJumpGun chooses a different path though.

Instead of simply increasing the obstacles in front of you, they use simple obstacles in very creative ways. When you start out, things are simple. Turrets shoot lasers and you avoid them. Saw blades are stationary and you avoid them too. But as the game carries on, they introduce ufos that act like moving turret, but they can be shot down. They also have sawblade launchers that will fire saw blades out but these can be shot too. But the blades can then bounce through the level acting as another obstacle. Mid-way through the game they even introduce level splitting warps and water hazards that reverse gravity.

All of these things come together in very interesting and deadly ways and it really makes for a truly unique experience. Even at a very early stage in the game, you can tell that these levels are not just thrown together randomly to make you rage quit. No, these were all hand crafted by a diabolic genius in an evil volcano lair somewhere. In this oversaturated era of procedurally generated levels, it is genuinely interesting to see someone actually make a level to test your limits. Every level in this game is built like a puzzle. It’s built to both teach mechanics and punish ignorance over and over again.

Of course your main goal in every level is to get a preset amount of Atomiks that will be located along a path. So you not only have to learn where they are, but figure out a movement or attack pattern to attempt to pick them all up in one go. In the early levels this is as simple as flying past them and sometimes coming very close to a saw blade or two. But as the game goes on, it sometimes feels like you need to have a university degree to solve some of the levels. This where the game can get very rage inducing very quickly. You have an infinite amount of tries and they have a great little rewind mechanism to keep you in the heat of things so you barely need to wait to respawn. But when you’ve died 30, 40, or even 50 times in a row on almost the same spot, even the fast respawn time can add to your blood’s boiling temperature.

I will fully admit there were a lot of levels that I could not complete. Could I finish them if I continued to play the game for weeks on end? Probably, but in the short time I spent with the game, some of the levels looked literally impossible and it actually made me want to play the game even more. Luckily the game is cruel but also fair. As long as you’re able to fumble through and grab a hand full of Atomiks here and there, you can basically warp to and play any level you want in the game. Heck, It even has an “unlock everything option” in the options menu if you’re truly stuck and want to punish yourself on even harder levels.

It goes without saying that this is one of the most original and fun titles that I’ve played this year. The neon retro pixel art is an absolute feast for the eyes and the soundtrack is probably some of the best original game music I have heard in years. The two button control scheme can feel a bit limiting at times, but it truly is all part of the master plan. Every single level in the game is crafted to perfection and the game does a great job of introducing new hazards and challenges at a great pace. This is honestly one space adventure that’s worth more than the price of admission.

RunGunJumpGun is available now on PC