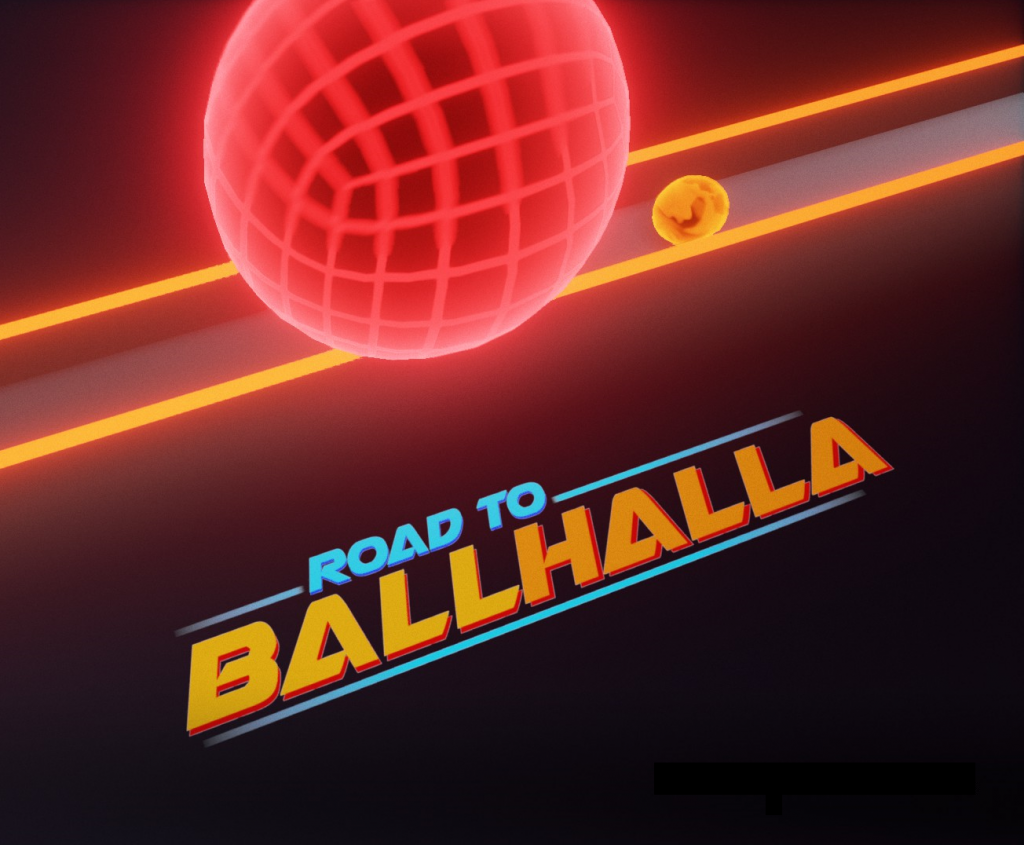 I’ve just dodged my way through more lasers than a Mission: Impossible movie. In front of me is a teleporter, and beyond it, two more crossed lasers and a prompt: “Legends tell that these laser beams will grant you a cheat code when they destroy you.”

Obligingly, I roll into the lasers. Cheat codes, amirite?

ZAP. Dead. “THE LEGEND WAS WRONG,” the game tells me.

I laugh, harder than I have in a long time.

Road to Ballhalla is a physics-based platforming puzzler from developers Torched Hill and publishers tinyBuild, with clean graphics and phenomenal music. You are a ball, of varying colour, and you must make your way through four worlds and twenty levels full of numerous obstacles and enemies — as well as the acerbic wit of both your narrator and your Twitch chat, more on that in a minute — in order to reach the rare heights of Ballhalla, and become one with the universe.

The puzzles in each level require forethought, reflexes, and timing — they’re tests of your reaction time and pattern recognition, as well as your mind. And in an aesthetically pleasing touch, they’re synced to the music — although that’s not always as helpful as it might first seem!

Completing each level gives you between zero and eight Tokens, depending on how many orbs you collected and respawns you needed. A certain number of Tokens is required to advance to the next world, and you can unlock additional content if you’re above a certain Token threshold.

In addition, each world has a “Rush” area — time-attack modes for each level, where your scores are put up on a global leaderboard. Completing Rush levels within certain times will give you one to three Stars, which also unlock additional content later in the game.

Now, you’ve heard a lot of those words before, and in that order—clean-looking physics puzzlers with good music are nothing new. What sets Road to Ballhalla apart is its writing and character.

You’re in constant, one-sided conversation with an impartial narrator, whose text prompts will appear next to the levels as you roll through them. The narrator will lie to you, flip text prompts upside down “for diversity”, mock you for dying, assign characters and genders to featureless warballs, and more.

In order to avoid spoilers, I’ll steer clear of discussing Ballhalla‘s writing, with the exception of my intro. Suffice it to say, it had me rolling with okay I’ll stop please put the knives away.

But seriously, though. There’s a lot of games that go the Portal route and try to combine humour with their puzzles. Road to Ballhalla succeeds.

On top of that, you can even integrate Twitch chat into the experience, so messages from your audience can appear alongside you as you play! I was unable to test this feature, but I’m going to assume your Twitch audience is the Sensible Chuckle type and that this will result in Good Clean Fun™ for everyone.

In fact, I only have two small qualms with the game:

Outside of those two minor quibbles, Road to Ballhalla is a perfect puzzler; relaxing, satisfying, and brain-burning, all at the same time. I absolutely enjoyed my time with the game, and I plan on going back as soon as this review is live.

The games published by tinyBuild all have one thing in common – a joyous, playful spirit. And Road to Ballhalla is no exception. It’s well worth your time.

Road to Ballhalla releases today on Steam for $16.99 CDN.

Jesse Mackenzie is the Managing Warball for AYBOnline.com. You can roll up to him at jessem@aybonline.com, and his opinions are his own.