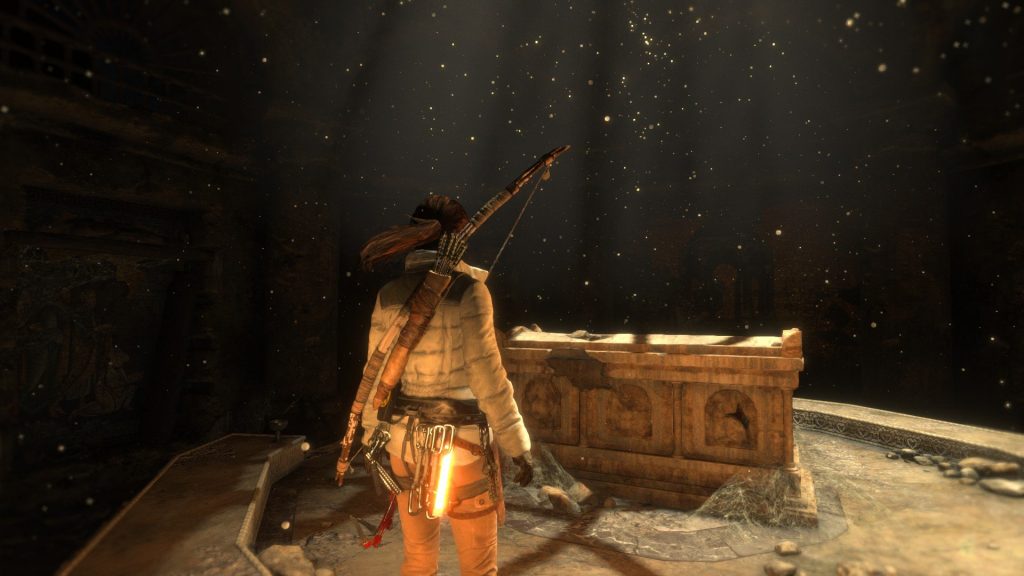 Rise of the Tomb Raider. Where do I even begin?

If you want to know my initial thoughts of RotTR, read my BASELine here.

I won’t repeat much of what I wrote in my BASELine, as it remains the same even after 10+ hours into the game. The game has amazing eye candy, the gameplay is easy to pick up, and the story is action-packed and keeps you on the edge of your seat.

What I really want to focus on are all the little things that were key to making me enjoy this game so much that I invested more than ten hours into it. It’s more than just pretty graphics and being able to headshot people with only my bow and arrow (though that is a pretty badass plus to playing this game).

We all know about the “fight or flight” response. The first installment of the rebooted Tomb Raider series used it, but this device was critical in keeping me engaged in RotTR. This game literally makes you do both — sometimes at the same time!

These situations feel pretty natural and well-paced as well, between fight-or flight and peaceful exploration. They don’t feel pre-determined through some algorithm that measures when the last time was that you had to haul ass across a canyon or 360°-headshot-no-scope Trinity soldiers in a fray while escaping a burning fort (true story, by the way). The timing of these situations make sense for the progression of the story, and frankly it wouldn’t be a Tomb Raider game if there wasn’t a little excitement every now and then to get the blood flowing.

Little thing, but it makes all the difference. 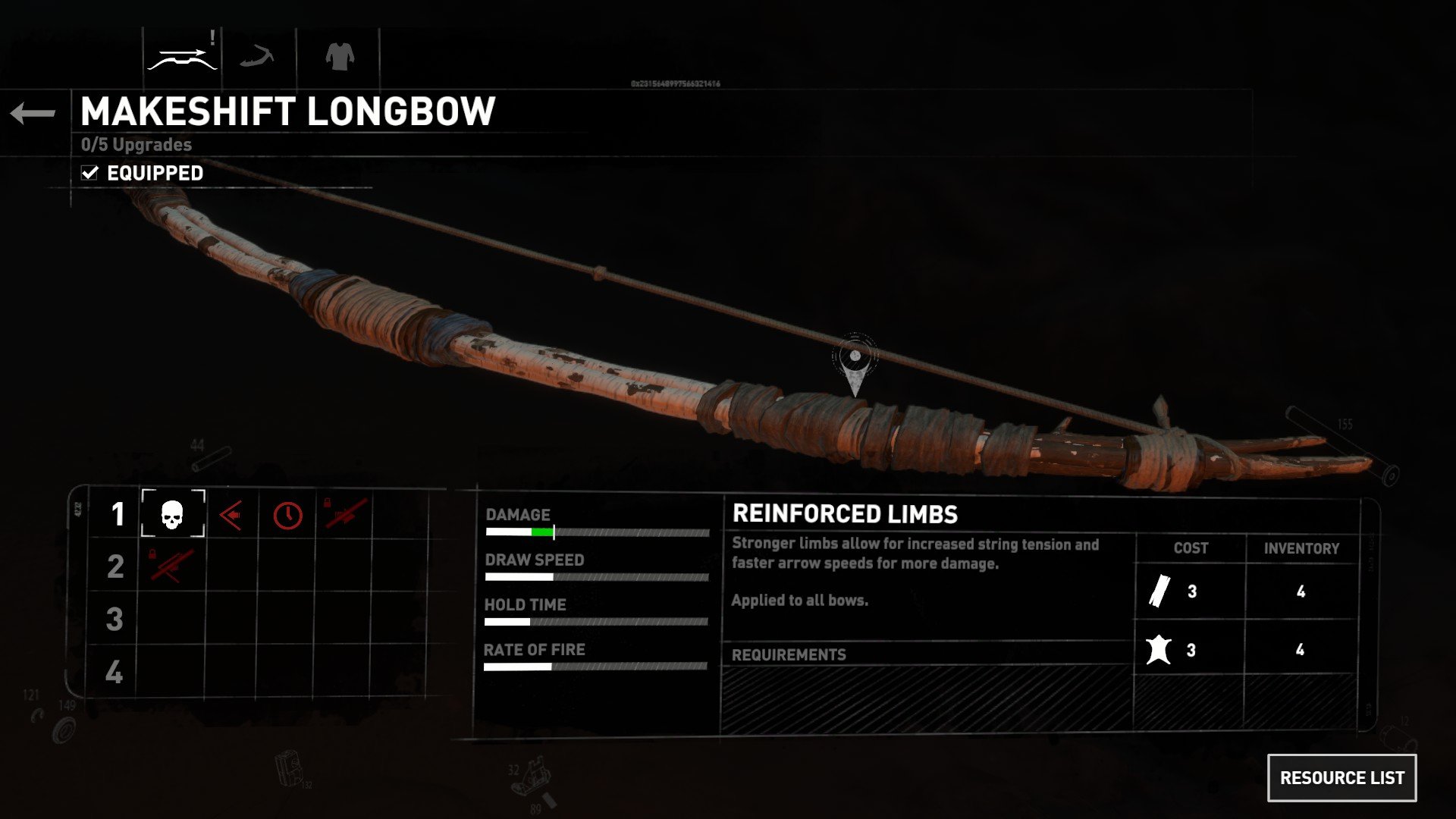 The crafting system returns, with a heavy emphasis on scavenging the environment and hunting animals to help you craft new equipment and weapons, and upgrading their parts as well.

Not only are weapons and equipment important things to craft, but so are your outfits as well. Wearing certain outfits not only prepares Lara for the weather and environment, but also adds bonuses that give you an edge in fights or help you blend into your surroundings. Outfits can be bought, crafted, or obtained after completing certain missions.

On-the-fly crafting ammunition is an important feature as well, as some situations call for you to pick up the closest object to you so you can craft an explosive or specific type of arrow, depending on the situation.

Finding materials to craft things with is easy enough, especially with Lara’s Survival Instincts ability. However, Survival Instincts is also easy to abuse, which sort of kills the magic of exploration and curiosity when on treasure hunts. It makes sense for some games — when the open world is incredibly vast, like The Witcher 3 — that you sort of need some kind of guidance. For Rise of the Tomb Raider, it didn’t deter too much from the game, but it certainly takes a little of that sense of being a true adventurer away from your exploring and treasure-discovering.

As a newly-hatched PC gamer, I hemmed and hawwed internally about how my first real fight would go, if I would be fast enough with my reflexes and other trivial concerns. I’m okay with third-person shooters even though I struggle a lot with aiming with a controller. But it’s easy to see why shooters are preferred on PC, because even combat in Rise was easier than I thought it would be.

You can choose to approach enemies in two different ways: go Terminator and destroy anything and everything that comes across your path, or play it stealthy.

I love executing sexy stealth kills, in any game. It’s why I loved the Arkham games so much. There is a huge benefit to going the route of stealth kills in Rise of the Tomb Raider, in that stealth kills can earn you more XP, loot items, and sometimes ammo retrieval. More XP means that you can upgrade your combat, hunting, and survival skills, and overall being a certified badass.

Not surprisingly, Rise of the Tomb Raider has its share of quick-time events, where you must execute an action by pressing certain buttons during critical moments within a certain time span. These happen once in a while, which is nice because it breaks up the mundane moments, kind of like the fight-or-flight situations I mentioned earlier.

The Tombs! What About the Tombs?!

What’s the point in calling a game Tomb Raider if there are no tombs? There are plenty, which I will bring to light a gaming dilemma I have.

Hi, my name is Kate and I am a completionist. So when I was told, “Okay Kate, you can’t find every relic in the game or anguish over every salvaged item, so try to keep your treasuring to a minimum,” to say I was crushed is an understatement. But what does this tell you?

If you want to blaze through this title, that is by all means your prerogative. For those craving that extra bit of exploration, this game does both very well. Raiding tombs is a hugely important task in this series, a task that rewards you for testing your timing, problem-solving skills, and patience. And the rewards aren’t just a few pieces of animal furs or salvageables, but hugely important treasures like weapon parts, skill proficiencies, and other invaluable things.

Even more interesting, Rise of the Tomb Raider introduces side missions requested by allies. Befriending the natives offers rewards in exchange for help, and offering your services can range from harvesting items for their needs to rescue missions for some sweet items.

Finally, if the screenshots haven’t said enough, I’m going to say it again: this game is gorgeous. I try not to be too enamoured by things like graphics when deciding if a game is worth buying or not, but it’s hard not to comment on it for a game like this. With a lush history in video games like the Tomb Raider series, seeing how this franchise has progressed in all aspects is truly remarkable, and Crystal Dynamics did the fans proud.

They made me appreciate PC gaming, after all. So that definitely counts for something.

If you’re a huge fan of the Tomb Raider games and loved the first one in the rebooted series, you’ll no doubt love its sequel. If you follow Lara’s adventures with fervour and excitement, this installment will not disappoint.

I’m actually contemplating playing the Baba Yaga DLC. Because I love me some old-fashioned myths.

Kate is a contributor and a Graphic Designer for AYBOnline, and producer on the Level 1 Scrubs podcast. The physiotherapy for her clawed controller hands is working, thanks for asking! Her opinions are her own. Feel free to follow her on Twitter and Facebook, where she posts updates about her creative projects!