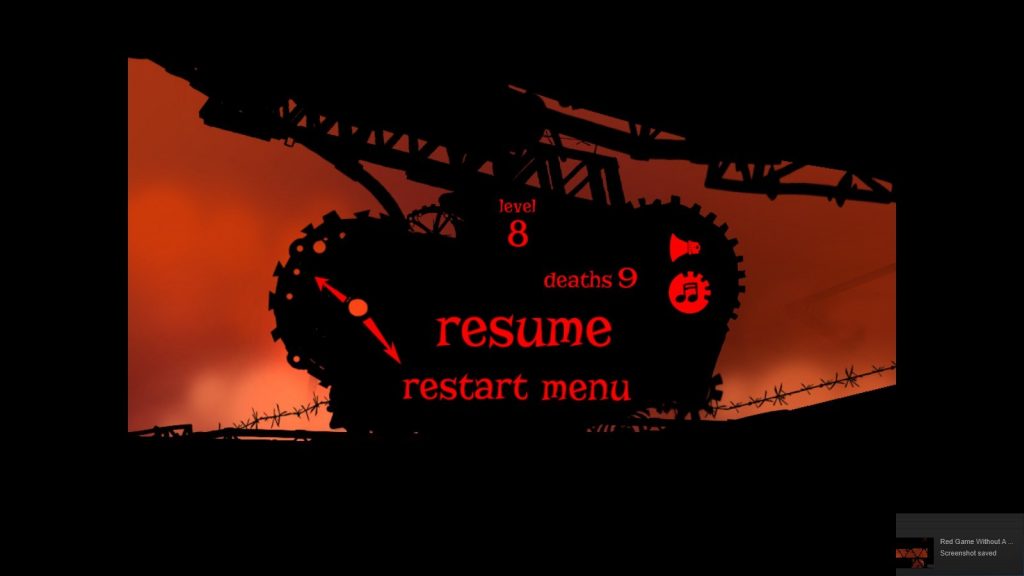 If you appreciate the finer things in life like beautiful music or the colour red, or are into unforgiving, death riddled, hellscape 2D puzzle games then boy do I have a recommendation for you! Red Game Without A Great Name, by developer iFun4all Ltd., is the latest hot new title out of Krakow, Poland to hit the Steam Store.

Red Game delivers what it promises, it’s definitely a red game. Perhaps it’s the showering of blood from all the times you’re going to die? Or perhaps it’s all the failed mail delivery attempts from other players? Bottom line, this game starts off nice and graceful, but slowly becomes a deathtrap of twists, turns, and quick puzzles that end in your untimely doom. Generally I get beyond frustrated with this style of game, the “die, rinse, repeat” or “try one more time,” and Red Game Without a Great Name was no exception.

Story: You’re basically a steampunk dude, in a very red future, with the goal of sending letters via (what I believe to be) robotic pigeons from one point to the next, while avoiding an almost certain death.

Gameplay: I’m going to be honest, this game drove me up the wall and I had my fair share of cursing out to a deaf audience. What you do is guide said steampunk pigeon through a labyrinth of puzzles and mazes, while trying to avoid traps, barbed wires, and other obstacles. What really messed me up (in a good way) was the controls. I was expecting a point and click, but this gave a new twist. You have to click and drag, thus teleporting the mail pigeon to a new location, BUT you have to be careful as a single step too far off screen could mean certain death, but a step too late can mean death as well. Literally everything you do in this game will mean death, and if that’s not enough, the game mocks your every life with a sense of “is that all you got?”

I put a solid six hours into it before forming an opinion on it, I felt it necessary to feel out the game and see how much I would rage and lose my mind.
Red Game brought me a exciting new take on “try one more time” and, as I’ve never experienced a game like this before, I truly enjoyed it. So if you are looking for a great casual challenge I cannot recommend this game enough, as it had me occupied for hours on end.

So let’s boil this down:

In closing, I can say Red Game Without A Great Name is a fantastic game for having friends over and challenging them to play, without a doubt something we should be seeing on Twitch for speedruns/challenges as well as something to torture your friends with and watch them continuously die.