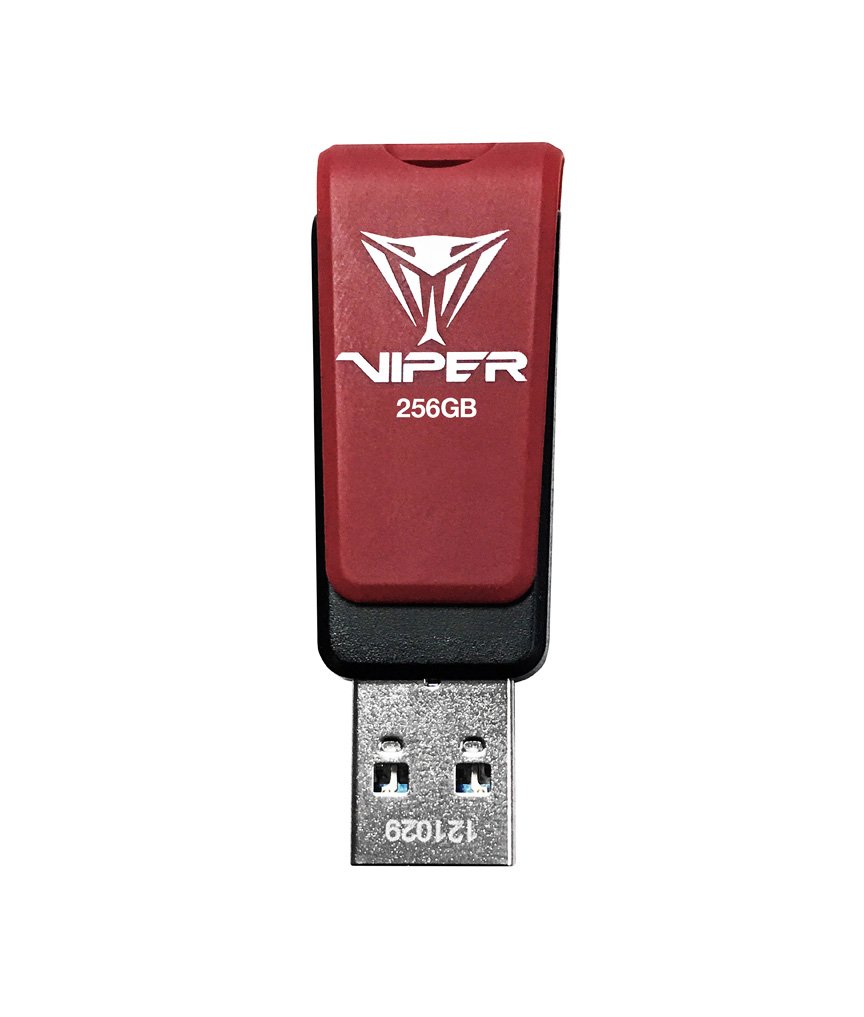 If you need to carry around a lot of data and don’t have a lot of time to waste when you need to access that information, Patriot’s 128GB USB 3.1 Gen 1 flash drive might be just what you’re looking for.

The pace at which facets of technological advancement moves these days is incredible to me. In less than a decade, we’ve gone from mostly using desktop computers, to everyone having a mobile device more powerful than those computers were. At the same time, we’ve gone from mechanical storage mediums to flash-based solid state mediums. Even thumb drives have been subject to impressive advancements.

Take, for instance, one of Patriot Memory’s latest flash drives, the Patriot Viper USB 3.1 GEN 1 flash drive. This standard-size USB thumb drive is available in three different capacities; 64GB, 128GB, and 256GB. That’s an incredible amount of data to carry around in your pocket or on your keychain. Many people have their Windows install on 128GB and 256GB SSDs. Patriot sent us a sample of the 128GB version to take a look at.

Aside from the capacity listed on the front, the Patriot Viper thumb drive doesn’t really stand out of the crowd much. It is a cap-less design. Rather than a cap that you could easily lose (I’ve lost plenty myself), Patriot installed a swivel cover to protect the USB plug.

The Patriot Viper flash drive adheres to the hottest new USB standard, USB 3.1, but the drive is still backwards compatible with USB 3.0, 2.0 and even 1.1. If you’re still rocking a computer with legacy USB 1.0 ports, this drive is faster than your internal hard drive and you should be looking elsewhere. 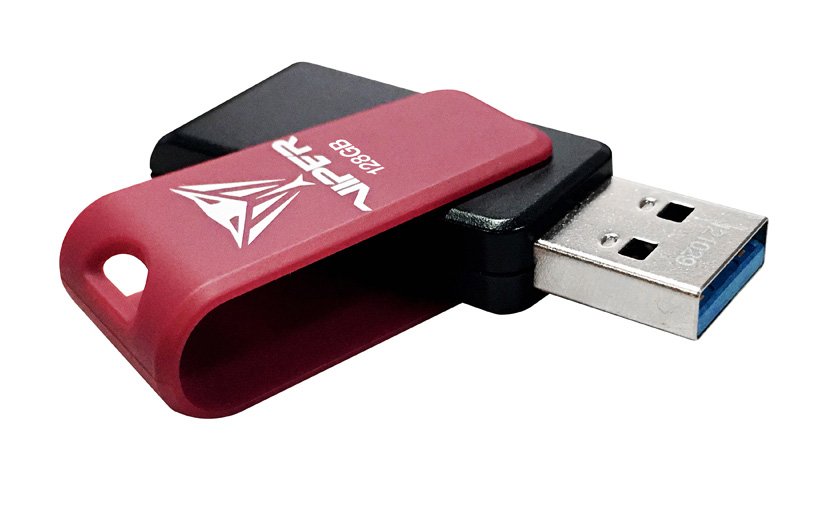 The package for the Patriot Viper 128GB USB 3.1 GEN 1 flash drive boasts “Fast transfer speeds. Up to 385 MB/s read.” Not only does this drive feature SSD-like capacity, it can access data at a similar pace. We don’t have a USB 3.1 compatible motherboard on hand to test those claims, but we ran USB Flash Speed on it from two different computers to see how it compares on older generation USB hardware. The drive was also compared to an older Patriot Memory 32GB USB 3.0 drive for comparison.

The first PC is an aging Intel Core i7 2600K installed in an Asus Maximus IV Gene-Z mATX motherboard. This board features USB 3.0, but the protocol was fairly new when this board shipped. Some devices, such as the Oculus Rift, are not compatible with the USB controller on this board. 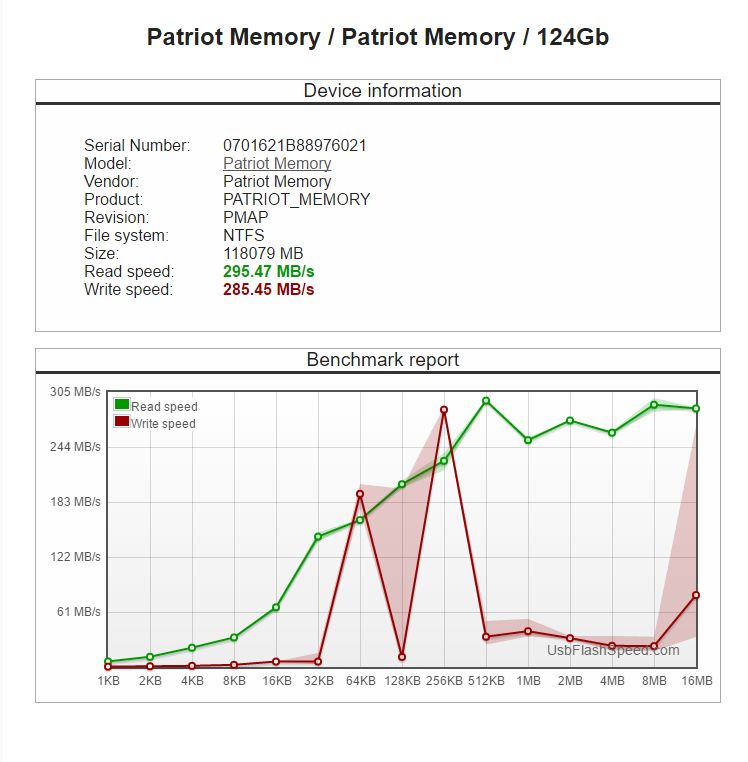 Unsurprisingly, the Patriot Viper 128GB USB 3.1 GEN 1 flash drive did not reach its advertised read speeds on the older machine. You may be surprised to see just how fast the drive was able to retrieve data on this machine, though. The test peaked at an impressive 318.86 MB/s, but it certainly depends on the block size of the data in question. 1KB to 8KB blocks read very slow, dipping the MB/s read well into the single digit range. As the block sizes increase, the read speed ramps up quickly.

Write speeds are a completely different story. We ran the test three consecutive times to rule out anomalies, which produced curious results. The first two write tests peaked at 285.45 MB/s and 284.80 MB/s respectively, but the third test dropped dramatically, down to 164.48 MB/s. We also noticed that even though the write speed peaked quite high, those speeds were only attained with 256KB data blocks. The 164 MB/s rating from the third test was achieved with 64KB data blocks. A similar spike on the 64KB block test can be seen on the first benchmark report, but the second pass was much slower.

Write speeds for the drive on almost all other block sizes remained at 30 MB/s or lower. 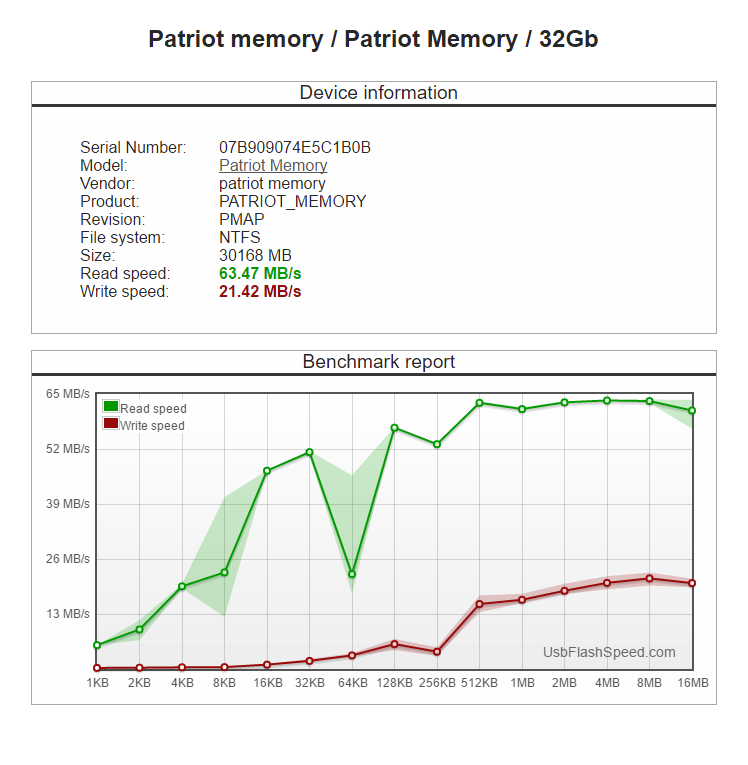 Even with the write speeds dipping well below 30 MB/s, this drive is a damn sight faster than our comparison drive. The 32GB USB 3.0 drive we used for comparison isn’t even comparable in the read speed department. The test peaked at 64.60 MB/s, though this drive seemed to handle the small blocks better than the new drive. The read speed of the 1KB blocks was approximately 5 MB/s, but it quickly ramped up, with blocks as little as 4KB being read at nearly 20 MB/s, and 8KB blocks were accessed at close to 40 MB/s. The new stick is still faster, but the disparity between 1KB and 16MB blocks is much more dramatic on the newer stick.

The second test PC is a much newer Intel Core i7-5930K in an MSI X99 Xpower AC motherboard. This board doesn’t have USB 3.1 either, but it is the last generation board before USB 3.1 became the standard for high-end boards. The results on the newer board were impressive, to say the least.

The Patriot Viper 128GB USB 3.1 GEN 1 flash drive delivers read speeds that are very close to the advertised maximum when connected to our other PC. In two of the tests, the benchmark was able to read the drive at 352.54 MB/s but in one of the three tests, it peaked at 372.10 MB/s. 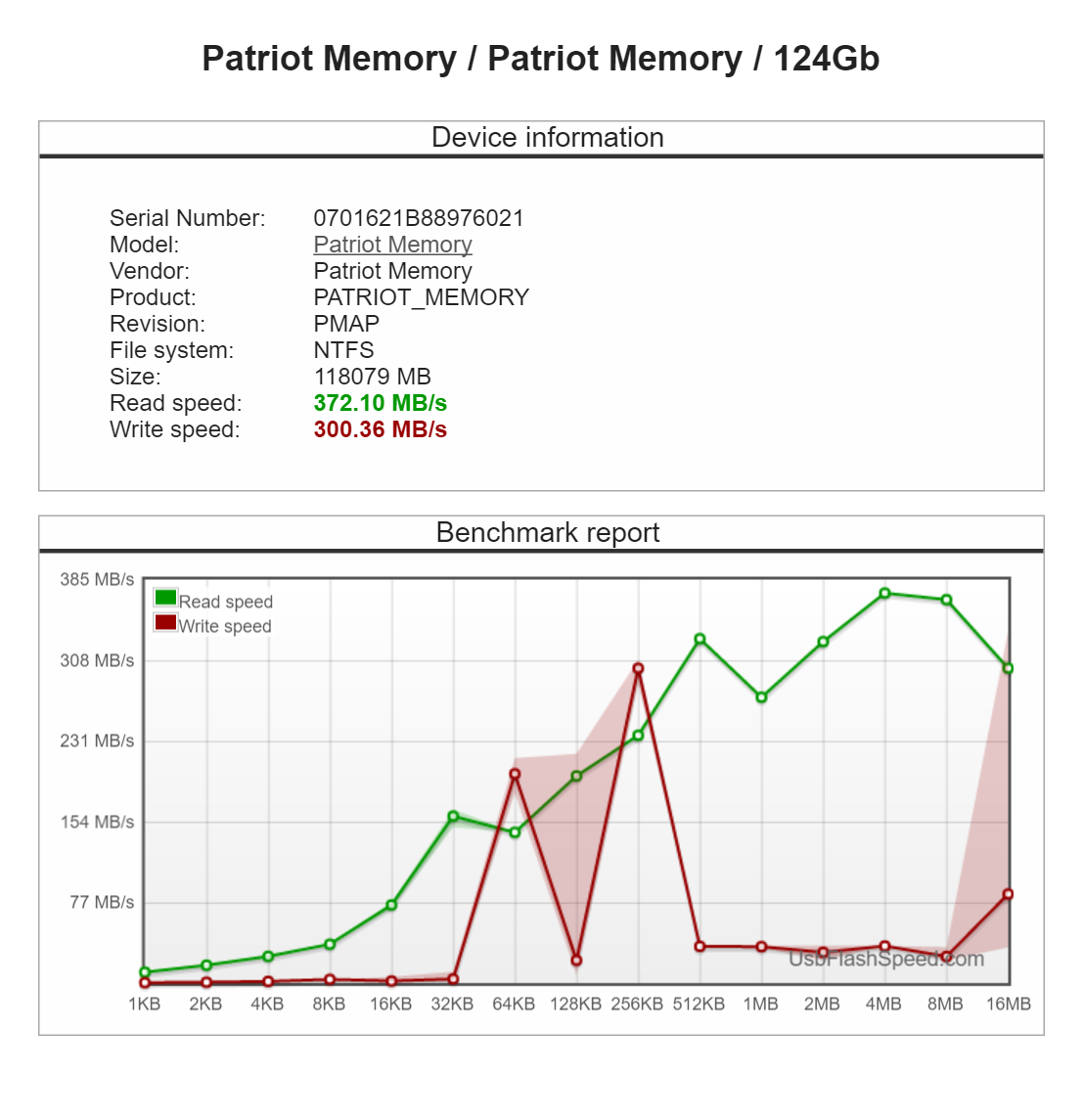 For write speeds, the situation was repeated. The first test peaked at 245.41 MB/s, but only the 64KB and 128KB write speeds spiked. Curiously, the following two tests managed quicker write speeds, 300.36 MB/s and 284.04 MB/s, respectively, but they both peaked on the 256KB block size. Write speed for 128KB was inconsistent. It started off at 260 MB/s but dipped to an abysmal 3.87 MB/s on the final test.

The write speed for this drive was usually between 25 MB/s and 35 MB/s. for 64KB blocks and larger. 32KB and under averaged well under 10 MB/s. 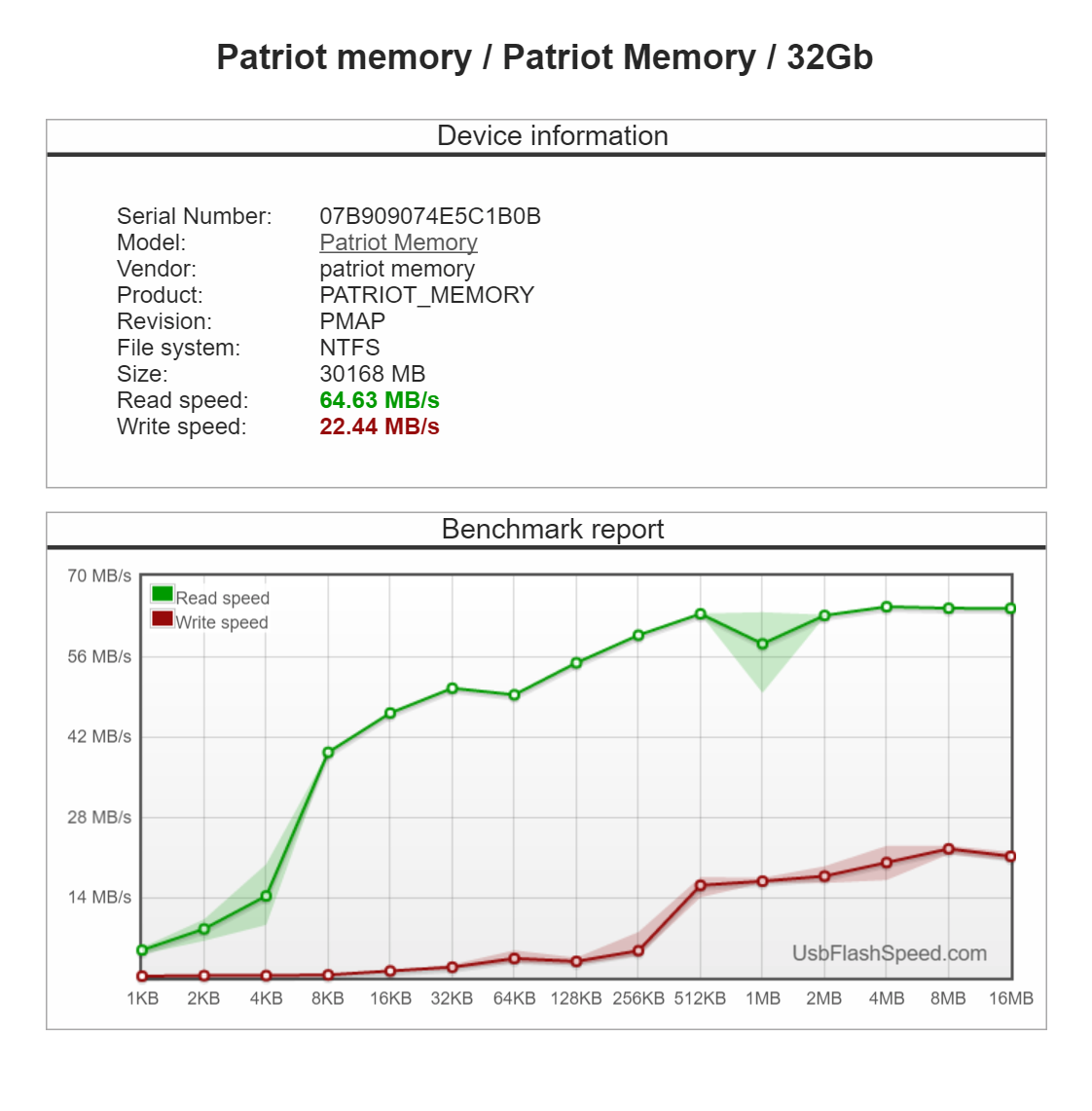 The comparison drive didn’t do any better on the faster PC than it did on the older one. Read speed peaked at 64.63 MB/s, which is unfathomably close to the 64.60 MB/s it reported on the other machine. Write speed was a similar story. It peaked at 22.44 MB/s, which is just over 1 MB/s faster than the older PC, but the two graphs more or less overlapped each other.

All in all, the Patriot Viper 128GB USB 3.1 GEN 1 flash drive is a nice advancement in flash drive performance. I’m not going to sit here and tell you that this is the fastest flash drive out there, because frankly, I have no idea if it is or not. What I do know is that the speed of my 32GB drive has never been a problem. I was thoroughly surprised to find out that, even on a bad test, the Patriot Viper 128GB USB 3.1 GEN 1 drive delivers double to triple the read speeds and more than 10x the write speeds.

If you’ve been looking for a new drive that can hold everything you could possibly need to carry with you on the go and let you access it quickly, the Patriot Viper 128GB USB 3.1 GEN 1 flash drive is not a bad choice. MSRP is $49.99 USD. We haven’t found a Canadian retailer with this model for sale.