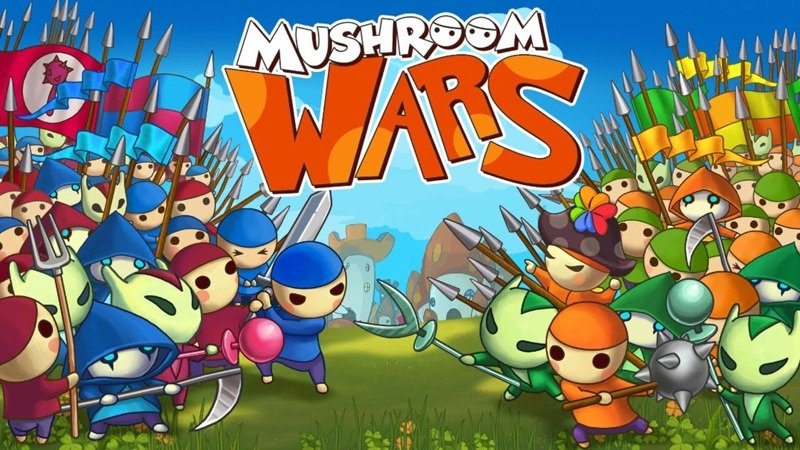 Mushroom Wars is an RTS game that has been released on several platforms, and now it has finally made its way to PC. Mushroom Wars certainly has its charm, but I found my interest in the game ebbing and flowing. Ultimately the PC version of the game is fun, but it is not for me.

The game opens with a simple little flash style animation that is supposed to set the stage for the conflict (which is never really defined). It seems clear that the story is not overly important in this game. The cutscenes that litter the game’s campaign look fairly blurry in their resolution and add little to the game.

The art itself during these scenes looks a little rough compared to the clean look of the characters during gameplay. The sprites within the game are very simplistic, but look incredibly charming. The simple art style also lends itself to helping players be able to tell what is happening on screen as battles quickly become quite chaotic. Each faction is marked clearly by a distinctive colour and unique sprites.

The mechanics of the game are quite easy to understand. Essentially the player will start off with a small number of villages that slowly generate units. The number of units is clearly indicated above each village.

As the villages build up its units, players are able to choose between waiting for more troops to generate or using the units to upgrade their village. The main way players interact with their opponents is by selecting villages and marching their units into an enemy’s bases and overwhelming them with superior numbers.

As the game goes on, these simple mechanics slowly build to more complicated matches as the game throws multiple types of units and multiple opponents with different objectives for the player to complete. In some matches, players are tasked with capturing all the enemy villages.

In other matches, the condition for victory is to capture the bases that have stars marked above them. By adding different conditions with different types of field units and bases, a very simple game quickly becomes more complicated, adding layers of strategy upon the risk and reward of saving up units and choosing how many to distribute. The controls are thankfully quite simple, requiring little more than mouse clicks and a scroll wheel.

The game often introduces new mechanics in a tutorial style battle, then builds upon that by adding it to things players have already learned. This way, the progression of learning new strategies is quite easy for players to follow. The Morale system also encourages players to keep capturing bases or properly defend their territory. Boosting morale allows for faster movement speed, stronger offence, and more effective defence.

The game quickly becomes quite difficult and very involved. It definitely requires focus and an understanding of the game’s systems.

As for multiplayer… It did not work for me. Like, at all. It never connected once. Sadly I cannot comment on this. It is unclear if it was due to server issues or lack of players, but it was frustrating not being able to access a potentially interesting part of the game.

It’s Fun for Awhile, but…

While these mechanics work well together, the game quickly becomes a tad tedious. The mechanics feel a little too basic to keep me coming back. In small bursts the battles are fun, but after a few matches, I was getting a little bored.

Mushroom Wars definitely lends itself to the “one more match” style of gameplay, so I am quite thankful that the matches are pretty short. I would play for about 30 minutes at a time and make good progress. After taking a break, I found I was wanting to come back. The cycle continued for hours of gameplay, but at the end of the day, I found I was not very interested in playing this game.

I found myself wishing I was playing this game on a smartphone or a tablet. While the PC version works well, this is certainly the kind of game I prefer in short bursts. On mobile devices, it is quite a bit easier and faster to jump in and out of battles. Thanks to the simple controls and the clean art style lending themselves well to those platforms, I feel I would be more engaged with them.

It Just Lacks Some Staying Power

If you are a fan of RTS games, you will find a lot to like about this charming game. But I feel it gets tedious after long play sessions. Ultimately, the game grew on me, but only in short bursts.

Nedu is a writer for AYBOnline. Many consider him a Fungia. His views and amazing puns are his own.