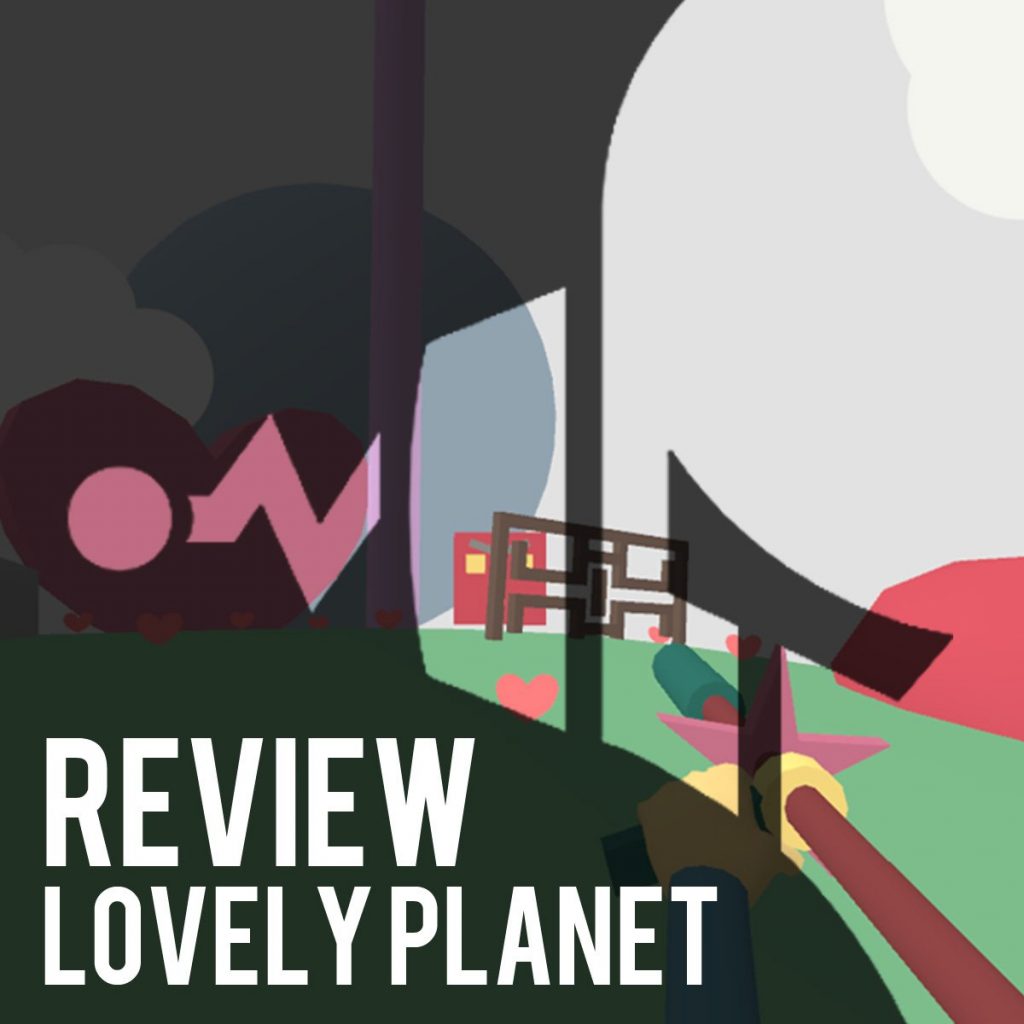 When I first heard I was doing a review for Lovely Planet on PC, my first thought was, “What the hell’s a Lovely Planet?” So I decided to watch a video about it. And then another. And another and I was still confused, but after seeing all the colours and stuff, I couldn’t explain my feelings–I knew I had to play it. Three-and-a-half hours later, with sore eyeballs and an exhausted trigger finger, I’m glad I did.

So what the hell is Lovely Planet anyway?

If the Prince of the Cosmos turned in his Katamari for a cube-shooting star wand in an FPS obstacle course, that would only be the start to describing the weirdness that is Lovely Planet. Rather than making another FPS, the quirky creative minds at tinyBuild have done it again and brought us something completely unique and extremely addictive.

This game is, at its core, an obstacle course with FPS elements–but unlike most modern games, it forgoes piles of weapons, special abilities, and cheesy military story lines to focus on the fun of perfecting your run. Your character only has the ability to run, jump, and shoot, and that allows you to focus on how to solve the levels in the fastest way possible. The overall look and feel of the game has a very Katamari quality to it, but that absolutely works in its favor.

This game is simply beautiful.

When I use the word simple, it is not a bad thing. This game takes the minimal design route and makes it work. From the very first level, it’s obvious the design team wanted this game to scream weird and fun.

The nice part about the simple polygonal design and pastel color palette is that everything in the level has its place. If it’s green, it’s grass. If it’s blue, it’s a platform. If it’s red, it’s trying to kill you. Because the point of the game is to finish the level as fast as possible, this simple design allows the player to focus on their targets and paths rather than getting lost in small details and confusing level design.

About the only thing I really found to be missing from the overall design of the game was any semblance of a story. I honestly wanted to know why I was running around with a star wand, shooting red cubes on floating islands. But I guess with a setup like that, I could just write my own and it would probably make just as much sense.

Just one more time–I know I can shoot that apple before it hits the ground!

This is just one of the many things you’ll find yourself saying as you play this game. The mechanics of this game are simply on point. Through the different worlds you’ll face, the game never really changes what you’re doing, but it does change how you do it.

For example, the first world of the game just runs you through a level with a few enemies that shoot purple cubes at you. You can dodge and shoot back and get to the end fairly easily. It’s a testament to good game design, as the game teaches you through playing instead of ramming tutorials down your throat. When you enter the second zone, you know that red cubes shoot purple cubes that will kill you, so they add in the apples. Yes, giant apples. These apples are on catapults that will fling them into the air. Now the issue is not that it will hit and kill you. It’s that you must shoot the apple before it hits the ground or the level resets. And of course, as you advance, there are more apples in trickier places to shoot and so on. This is both a ridiculous and awesome mechanic that I have definitely never seen in any other game. As you carry on, the game continues to throw interesting obstacles for you to shoot or navigate around to eventually drive you insane.

You’re gonna get hit by cubes, shocked by tesla coils, and KO’d by apples, and it’s gonna be a blast.

Even though there’s not a lot of variety of enemies or themes in the game, it still felt fun and interesting the whole way through, because they clearly had a lot of fun designing these levels.

The best part of the whole challenge is that every level I played was built to be tough, yet fair. If you screw up in this game, it’s usually your fault, because this game has some of the tightest controls I have ever seen in an FPS game. Even though I found a few places where I could fall through a level or get stuck in a corner, it was usually well off the beaten path and would never happen in normal gameplay. Every part of the level is designed to keep you engaged and actually improve your skills throughout. There are many spots where accuracy is not only encouraged, it’s an absolute necessity or you will break the level. It feels almost as if this game would be an excellent training ground for anyone that wants to get good at FPS games.

Topping off this deliciously designed game is the sound. Every world has a quirky jazzy electronic song that is not only easy on the ears, but fits well with the feel of the level. Even though the sound track is excellent, though, I found the sound effects to be lacking a little bit. In a colorful and funny world like this, I expected things to be a little more boastful than they are, but that may play into the whole choice to not distract the player too much. They certainly get the job done; I just felt they could have been a little livelier.

So what are you waiting for? Go shoot some cubes!

This game took me completely by surprise and I’m so glad it did. Its “Kawaii As F***” design, snappy controls, and player-focused gameplay is an absolute winner in my books. The tough-but-fair level design will have you trying one more time, every time until you get it right, guaranteed. If you’re an FPS fan, I definitely think practicing in a game like this could have a great impact on your skills.

I really cannot say enough good things about this game. The only issues I found were very few and minor in nature, and the only obvious problem now is that we have to wait for Lovely Planet 2.

Lovely Planet is available now on PC, PS4, XBox One, and Wii U.

Dandr0id is a content writer for AYBOnline.com, a producer for Level 1 Scrubs podcast, and an avid fan of square pizza. He may also be a voxel, but is probably just a series of polygons. His opinions are his own.