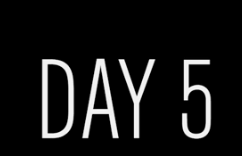 I’ll be frank, I don’t like many TV series, really the last thing I watched was BoJack Horseman and that was lit. The Walking Dead bored me into a coma, having me wishing for the sweet release of death. I often fantasized I was one of those mindless zombies getting my insides blown out by a tractor trailer, then it came to me I could just turn it off and not go with the flow. It takes a lot for me to sit down and watch a series, never mind enjoy it. This goes for a series of anything really.

It has to hold my attention, have a great story, music and characters. The atmosphere of the show needs to be a perfect storm of all of these to allow me to sit down and enjoy it uninterrupted.

A lot of shows lack this, they have boring and unrealistic dialogue that you could easily replace with the sounds of a box of nails in a microwave, characters so dry and unlikable that you wish they would just die off the next episode, or writing so bad you’ve taken to make your own adventure books for a better ending.

Day 5 is none of this. It’s a perfect storm, and if you’re not watching you may have some severe buyer’s remorse and regret not getting on this sooner.

Day 5, in my honest opinion, is the best original program to come out this year without a doubt. FINALLY something with a fresh original idea, smart writing that draws you onto the edge of your seat, has you asking, “What the hell is going to happen next.” I simply couldn’t stop watching, RoosterTeeth had me dedicated to coming by every Sunday to see the next episode. I was hooked and now that the first “Season” is done, I don’t know what to do.

A short summary is, the world has gone to shit. Overnight, people started dying in their sleep due to a fatal sleep epidemic — when you go to sleep, you die. To survive, you need to stay awake. The story follows a band of characters: Jake a drug addict who somehow survived, Sam the youngest survivor and seemingly only teenager, Ally is one of the late night doctors on shift when all hell broke loose, and Elis the captain of an airliner for red-eye flights airborne when this all started. Following their own personal days from hell, the story convenes on the fifth day.

During the story, we’re given angles of Day 1, we get glimpses through the main characters and some pivotal side characters of what happened in their world, and the world around them. We get to see it through their eyes what happened in their worlds, seeing how they got to where they are, and how they’ve survived. We see flashbacks to the day before and what brought them to where they are now. One of the most crushing flashbacks I won’t speak of but it struck a personal chord with me. This show really will make you go, “Man… I didn’t think like that” or “Shit… this would really suck”.

The story starts with Jake on Day 1, waking from his drug-induced coma and walking out into the world, and upon doing so discovers his local town abandoned. As he starts to explore, he discovers the aftermath of what had happened overnight.

Over the course of the first few episodes we’re introduced to major characters such as Sam, Ally, and Elis, like I said earlier we learn of their stories, where they were when this all happened and how they survived. Together they agree to work together to try and solve this mystery.

Stepping up to the leadership role and arguably everyone’s favorite character (me, of course speaking out of my ass, I just assume everyone loves Ellis), an intelligent man by the way he talks and presents himself. Ellis believes he knows the root of all this, as you’ll discover he found a trend and may have the answers to all this, with the help of the team and their unique abilities. From late-night workers to being an insomniac, they work out a plan to save the world — well, what’s left of it. Of course, nothing ever goes as planned in the sleep-pocalypse.

The group is constantly met by new opposition, trials, and sometimes things out of nightmares, from roaming psychopaths to the harsh reality that humans weren’t the only ones affected by all of this.

I’ll leave it at this, as if I say any more, I am at risk of spoiling the series, and trust me you’d rather I didn’t. This series will have you engaged, it will pull you in, and it is worth the watch and the time put into it.

So if you’re into thrillers that will keep you on the edge of your seat and wanting more, I can’t recommend this show enough, I still can’t get enough.

It’s ready for you to binge the entire first season here on RoosterTeeth’s site.

Steve Noel is the Deputy Editor for AYBOnline. It’s always High Noon at his desk. His opinions are his own.