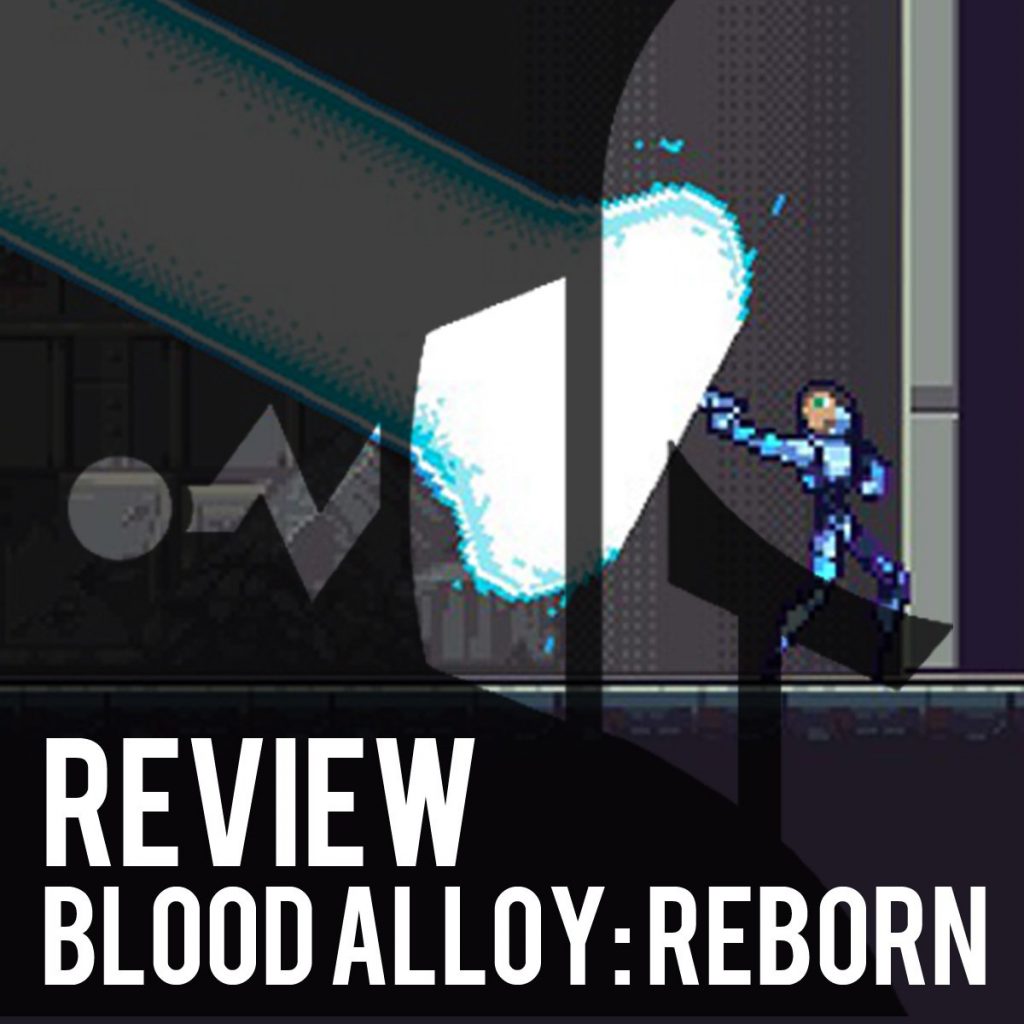 Blood Alloy: Reborn seems to have all makings of a game I would love. It’s a slick 2D platform shooter with great movement and speed, mixed with an insane amount of things to shoot at. Unfortunately, the game is marred with so many other issues that it really takes away from the whole experience.

Here’s where I would talk about the story if it had one.

Blood Alloy: Reborn is fairly light on motivation or drive, apart from the basic idea of “kill all the robots”. When you start the game, you are greeted with a bland UI, glitchy menu, and an odd placement of in-game achievements in the bottom left corner.

You begin with a simple tutorial. You can shoot your gun, slash with your sword, and zip along walls and roofs with your rocket slide. Finally, it tells you to kill ten robots to rescue a captive from a kidnapper robot when they appear. After completing this short tutorial, you are treated to a slick little intro–unfortunately only about eight seconds long–that introduces you to the “story”, and then you’re on to the killing robots. Even after you enter the first level and start blasting bots, you really don’t have a clear goal.

But you’re not here for the story; you came to shoot stuff, right?

If there’s something I’m the most torn about with this game, it’s the shooting and movement mechanics. When your entire game is based on shooting enemies in an arena, that mechanic had better be damn tight. But unfortunately, these controls are far from that.

The first issue is the camera. It is just too close to you and the action, which shows off the sweet pixel art nicely, but makes navigation, enemy detection, and attacking a bit of a nightmare in certain situations.

The mouse/camera movement is laggy and imprecise. It never seemed to focus on the character, and rather just lazily settled into the area near a random edge of the screen.  And this caused the shooting and accuracy to be off.

The other issue with the shooting is that you can either mash the fire button to make it rapid fire, or you can hold it to charge up a large beam–which would be fine, if it had precise controls like a Mega Man game. But I found myself constantly hammering away on the fire button to kill a swarm of robots, only to have a few shots fire, and then my gun would get confused as to whether I was still firing or trying to charge a beam shot.

The enemies also seem to be fairly unbalanced, as some will just fly blindly around the screen until you get near them, and others will hunt you down from across the screen before you can even see them. I constantly found myself getting hit by enemies and projectiles that weren’t even in the screen.

But the game does a lot right, too!

Even though the menu system needs a lot of work visually and mechanically, the in-game graphics are awesome. The first thing that drew me into this game was its ’90s-inspired Metroid-style pixel art. The main hero is artfully animated and you really do see and feel the movements that are happening on the screen.

When you settle into a groove and really start connecting with the controls, there isn’t much this character can’t do. The walljumping is accurate and carries the right weight; the rocket slide is a blast to use, riding up walls and across the floor at insane speeds. The sword attack is extremely satisfying, as you can slice and dash in mid-air to create some sick aerial combo kills.

Along with the sweet art, the game packs an amazing soundtrack that will really get the blood pumping when you jump into a match. As the game progresses, you unlock more and more tracks, and they each add to the speed and visuals of the game.

They have also done a great job with the design and variety of the enemies. Too many games like this have you hack through wave after wave of one or two different palette-swapped minions, but Blood Alloy‘s enemies all have their own attack style, unique movement, and difficulty range.

In general, if you can get past the awkward camera and clunky shooting, Blood Alloy: Reborn really does offer some top-notch 2D shooter goodness. The game also carries an old-school difficulty level, as there is no rebounding health bar, or even health pick-ups. The only way to heal is by raising your kill combo and receiving a tiny scrap of health back from doing so. Even though there is very little story to drive you forward, I had a lot of fun just flipping off walls, blasting robots and saving captives again and again for hours on end.

So I guess the question is, do you like killing robots?

Honestly, after playing this game, I didn’t know how I was going to review it. I wanted to love this game. The game and this team have a lot of potential. They have created something that is ultimately fun, but has a long way to go. It feels like more of a tech demo for the next great 2D shooter. If this game had better controls, a full story with boss fights, and a bit of polish, it would probably be one of my favorite indie titles of the year. The music, graphics, and game play is on point, but the poor UI, laggy controls, and overall empty feel keep it from being a truly great title.