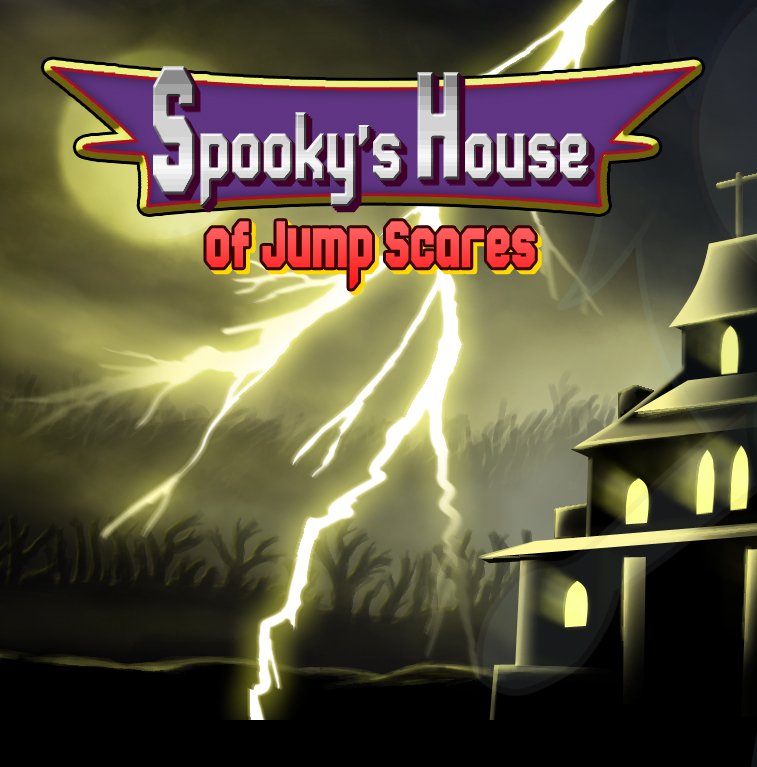 My bar for free-to-play games is set pretty low at this point.

Call me cynical, but if a F2P game doesn’t fill my screen with ads or lock me out after 25 seconds until I buy more gems, then they’ve done more than I expect. Maybe this isn’t the most practical way to approach free games, but what can I say? I’m a product of the times I live in. But it’s specifically because my bar is set so low that it’s so refreshing to see a free game put on its big boy pants and become just a regular old good game that happens to be free (bonus!)

Spooky’s House of Jump Scares, developed by the 2-person team Lag Studios, is one of these rare creatures. Found on Steam or Indiedb for the low, low price of $0, there’re no microtransactions to be found here (the only paid content is the $10 OST, effectively serving as a donate button, and future $5 DLC packs) – only a well-designed, funny, and surprisingly scary game.

Note: I’m going to try to keep this review as spoiler-free as I can, since much of the enjoyment I got from the game came from not knowing what to expect… expect some necessary vagueness.

The premise of the game is this: You are a brave (or stupid) person trapped in the titular Spooky’s mansion and you need to traverse 1000 rooms – each with increasingly horrifying inhabitants – to earn your freedom. On the way, you’re assaulted by various “Specimens”, where many taking inspiration from famous horror movies and games. And it’s within the confines of such a simple premise that SHoJS (yay acronyms!) really shines. It just paces so well. Each room takes an average of a few seconds to finish (though a few can take much, much longer) and, while some layouts do repeat, it never feels too repetitive. The potential for tediousness, which SHoJS flirts with through the slower paced first 50 or so rooms, is slowly replaced by tension, and eventually you’ll find yourself rushing headlong from room to room, eye locked on the room number, praying that you’ll avoid meeting a horrible end.

It’s this slow increase in tension that’s so critical to the game’s success. In Room 0, you are introduced to Spooky, an adorable little ghost with a voice reminiscent of Foamy the Squirrel, possibly the least threatening specter this side of Casper. The first few rooms are cute and non-threatening, with static cardboard cutouts of “monsters” that pop out of nowhere and definitely never made me jump. Nope, not ever.

The carefree days of chibi ghosts and pumpkins doesn’t stick around for long though, as the game quickly starts upping the ante on the scares, turning from a goofy parody of a horror to something much more unnerving (I got my first proper scare around Room 75). Cardboard cutouts are replaced with a veritable cornucopia of terrors, referencing horror staples like Silent Hill, Resident Evil, and Alien, as well as some “deep cuts” of spookiness (most notably a section clearly inspired by the Bottom of the Well from Ocarina of Time). The variety in enemies also results in a wide range of environments that can (and do) change abruptly and without warning, capable of taking you from a medieval stone hallway to a fog-dense forest, to a futuristic facility in the span of just a few rooms. This adds to the Lovecraftian geometry and overall impossibility of the mansion, something the game is acutely aware of, and isn’t shy about acknowledging.

While at first simply running away from the things that go bump in the night is enough to keep you alive, the game starts to add in unique mechanics for many of the Specimens as well, forcing you to read vague clues and piece together how best to face them. These mechanics, and the increase in difficulty that goes along with them, serve to keep the game exciting. Worth mentioning here is the sound design. While I’m lukewarm on the menu theme, the in-game music is tense (there’s that word again) and atmospheric, adding weight to the cartoony graphic style. Each Specimen is accompanied by its own signature soundtrack, usually beginning just before an attack, meaning that paying attention to the music (and your environment) is often critical to survival. The ending doesn’t disappoint either, building up to a pretty intense sequence that I have no intention to spoil, beyond noting that it will require a bit of creative thinking to pass, and it’s completely absurd.

All in all, SHoJS is a fun and very creative game. It does a lot with a simple concept, and manages to straddle the line between scares and laughs pretty effectively. Technically speaking, it runs smooth, with not much in the way of issues (though at the moment, Steam Overlay isn’t supported due to an issue with GameMaker, the software used to create the game). It took me a respectable 5 and a half hours to beat – though you could likely shave some time off that by not dying like a dummy as much as I did. This seems like just around the right length, since by Room 900 I was ready to be done. I could have done with a few more “default” room types, and maybe a touch more interaction with Spooky to flesh out the implied story, but all in all, Spooky’s House of Jump Scares is a solid game, made by a small team that’s doing all the right things in terms of theme and scope, all for an unbeatable price. There are still plenty of things to see that I didn’t even touch on (including a brief but satisfying game of Pac-Man), and I have no problem recommending it. I’m excited to see more from Lag Studios in the future.

Eric Roy is a contributor for AYBOnline. He likes long walks on the beach, getting caught in the rain, and isn’t afraid of skeletons… they ain’t got no muscles at all.