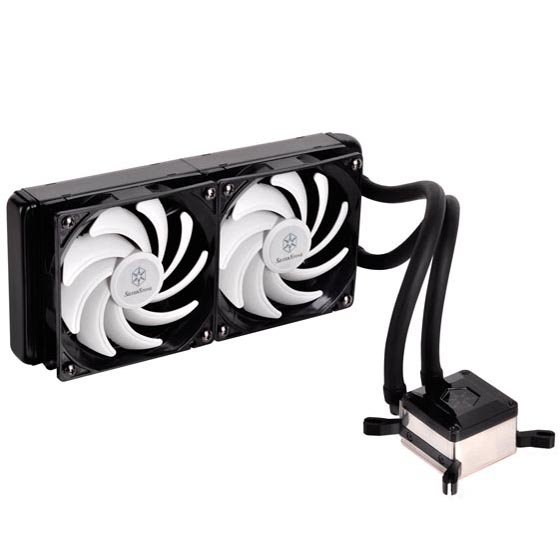 The Silverstone TD02-E liquid cooler is a 240mm closed loop cooler supporting all major CPU sockets currently on the market, it features two 120mm fans that push around 92.5CFM of airflow to keep your CPU quite chilly at around 26C on idle. Both fans spin between 1500~2500RPM to keep that air flowing through the radiator. The TD02-E is priced at about $134.99 here in Canada, which is one of the cheapest I have found compared to other 240mm AIO coolers.

The CPU block of the cooler is made up with a copper base with nickel-plated aluminum unibody with nice thick rubber tubing to the radiator which is made up with aluminum. It feels and looks like a premium cooler. The fans are of nice quality as well and don’t feel like they would wear out any time soon. The water block does feel nicely put together and has good weight to it. It’s nice to see they also included the LED on the water block to verify that the pump in the block is on and working.

The installation of the cooler was fairly simple. It followed the same procedure as most all in one systems. it came with a back plate that had adjustable holes for different sockets and with additional brackets to allow for either Intel or AMD installations. I would be using the Intel method for my build for socket 1150. The back plate was made simple to install without removing my motherboard due to how the case was designed in keeping the back side open for cooler backplate installations. This seems to be common with most builds these days. The radiator was simple as well with the choice of having the fans on either side of the radiator. It was well secured to the top of my case allowing for 8 screws to be used all with anti-vibration padding to keep a silent operation. I can see with how cool it runs that overclocking would be a breeze with K type processors from Intel, unfortunately I am currently only using a i5-4460 so I am unable to test this.

I was very happy with the construction and build quality of the TD02-E. It was very aesthetically pleasing in my case and kept a very silent operation throughout my gaming. At the price point of $134.99 CAD it’s an easy choice to make when choosing your next all in one liquid cooling solution. It was simple to install and gave me no trouble at all.  With this I can definitely recommend the TD02-E as a first choice in a 240mm rad liquid cool setup for any new builds.