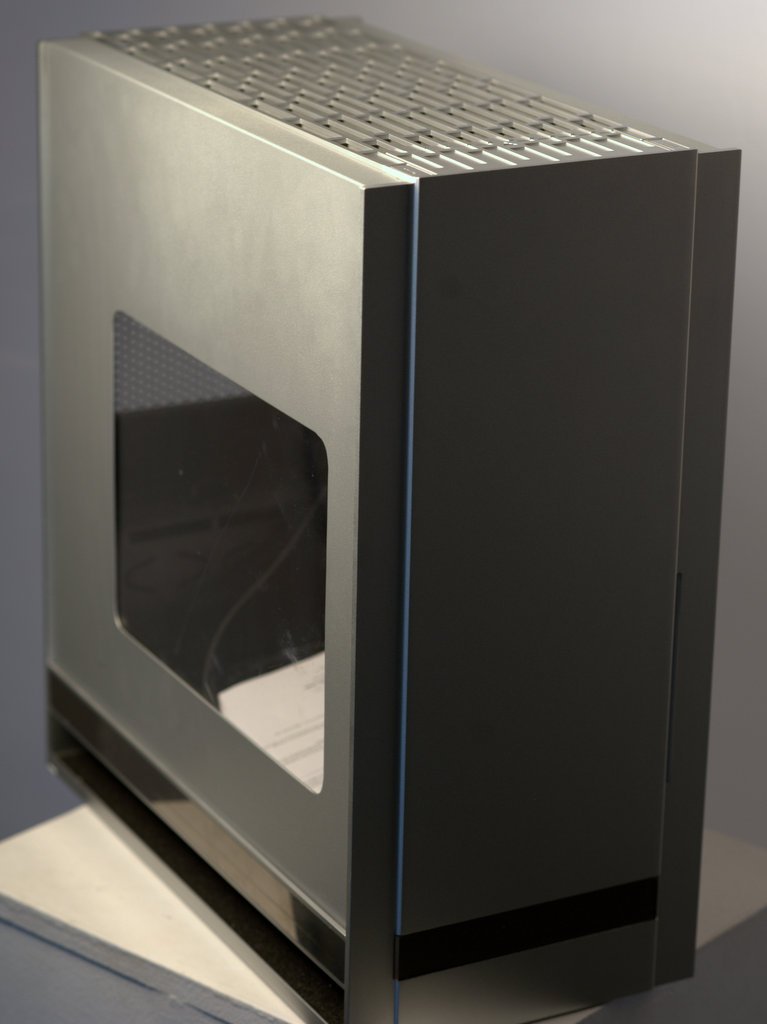 The Silverstone FT05 is a unique mid tower case that features a rotated motherboard design with the rear I/O facing the top of the case. It has a very similar layout  to the Silverstone Raven RV05, which we’ve reviewed in the past. The case included 2 x 180mm fans that cover the entire floor of the case which help provide superior cooling of the unit. There are 2 x 3.5” drive slots in the drive cage. 2 x 2.5” behind the mobo but no 5.25” bays to help keep the cases smaller design feasible. There is one mount included for a slot loading disc drive as an alternative. The front panel I/O features 2 x USB3.0, no USB2.0 ports but a mic in and headphone out standard jack. When pricing it out I was glad to find it is carried at several places. Our local Memoryexpress.com had it currently priced out as $269.99 at this time this article was written. 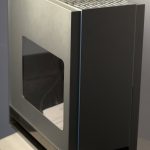 The body of the case comes in either brushed silver or black aluminum, we were given silver for our review. The case has a steel body which makes it quite heavy for its size but also very tough. Much to my displeasure the top panel is plastic and it is the only plastic piece on the outside of the case. Although it serves as a great vent it doesn’t do much more for the design of the product. The window on the side panel had great placement to view the motherboard and video card without showing too much cabling. The bottom of the case shows off a mirrored acrylic stripe and gives a raised slot for the bottom fans to pull air from which helps if you have the case on carpet. I also noticed the side panel features sound dampening foam to keep everything nice and quiet, which is a great feature that manufacturers are finally including in their cases. I was happy to also see that Silverstone removed the 5.25″ bays, as I can’t remember the last time I needed to use a disc for anything with Steam being the major distributor for games these days and operating systems available for download to flash drives.

The case had a lot of restrictions that put me off from using it as a day to day case. While it did have great airflow with the two bottom 180mm fans it felt very cramped with my SLI’d GTX 970’s. Building it was very meticulous as you had to remove the drive cage to get the PSU installed and routing cables resulted in me being unable to put the back side panel back on properly, there was a slight bulge. The plastic bars on the top of the case made it very difficult to plug in some of my cables such as my DVI cable and my keyboard’s USB cables as they are a bit thicker. This also resulted in taking twice as long to build the PC. I know this case is designed to be compact but only supporting 2 x 3.5″ HDDs limits the ability to have a large amount of storage space and seems odd now that SSDs are standard. Thankfully on my build this was a non issue. I will note that for anyone using closed loop liquid cooling that are 240mm or more, (We are actually reviewing Silverstones’ newest closed loop block at the time of this article) both 180mm fans would have to be removed from the bottom of the case which compromises the airflow, especially with dual GTX 970’s in SLI. I opted to use the stock Intel cooler instead.

Although extremely good looking and very sturdy in quality, I felt the case could have been better thought out. The top of the case could have had those plastic bars removed (what look like black handle bars in the pics above) or at least have the ability remove them to route cables and then put them back afterwards. Although conceptually designed to be a compact case, the space restrictions made it very hard to put together and hide my cables. Being an enthusiast of closed loop water coolers I would have liked to see a solution for at least a 240mm rad on the front of the case to keep the integrity of the 180mm fans on the bottom, especially when it seems everyone is now on the water-cooling bandwagon. However, that being said, I did find it overall great for everyday use, I’m not re-running cables all the time or adding more hard-drive space. I find that it is easy to transport in case i have to move it for events such as a BaseLAN.