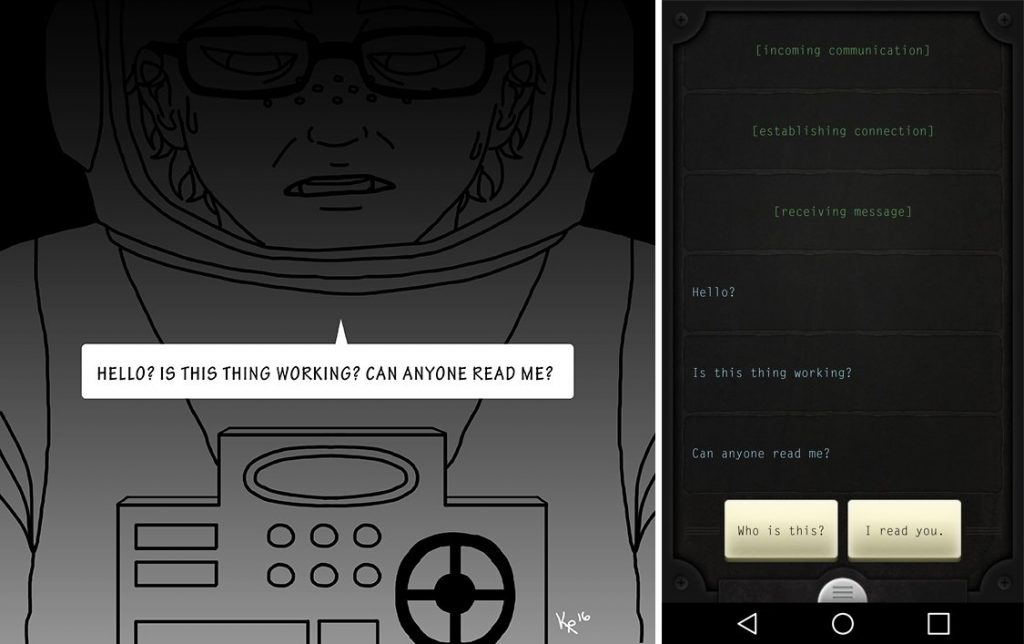 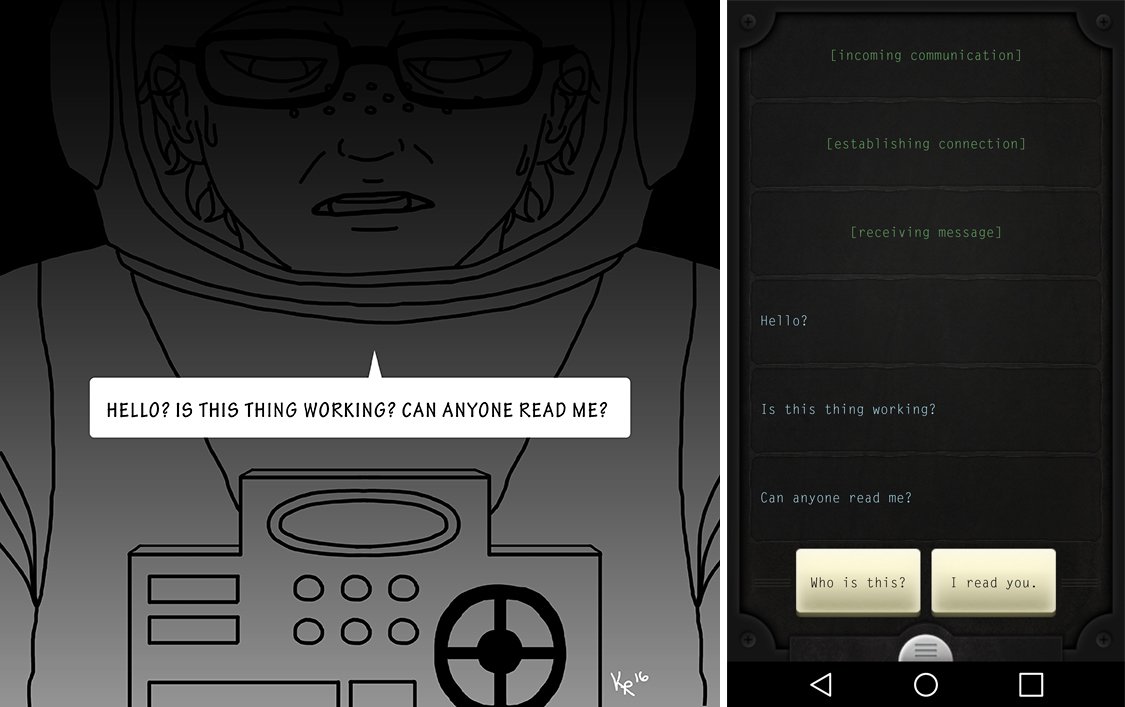 Recently, I’ve met this astronaut and we started texting each other.

That’s how it all starts in 3-Minute Games’ mobile game Lifeline… sort of!  When describing Lifeline to people, I found it difficult explaining my experience with it, especially since the main gameplay is purely text message-based.

Friend: “So you receive texts from some person.”

Friend: “Do you see this person ever?”

Before you make assumptions, though, or judge me too harshly, give me some time to explain. I figured screenshots of text were a little too bland, so I thought I would spruce up this review with my own drawings of how I imagine the story.

You receive a message from an astronaut named Taylor, whose ship has crash-landed into an alien moon. Disoriented and scared in this strange landscape, you must help Taylor survive until rescue arrives. Your role in Taylor’s world is to direct and provide advice, encourage, and be there as a sounding board if necessary, as you are Taylor’s only hope to make it through this ordeal.

The entire game takes place on your cellphone, exchanging messages back and forth between this stranger — all in real time. But what does that mean?

Taylor will provide you with updates every now and then on discoveries or information gathered from this strange alien moon. When I talk about things happening in real time, if Taylor says that a task will take an hour — it really will take an hour! The nice thing about this is that you can have the game playing in the background of your apps and phone while you do other things in your real life until you receive a notification from Taylor.

Equally nice as well, when Taylor requires a response from you, it does not need to be immediate. I would wake up with notifications from Taylor sometimes waiting for me to respond. However, because of this mechanic, I found myself worrying about Taylor’s safety at times when the wait times were a little too long — and I’ll tell you why.

Throughout the game, Taylor will occasionally ask you for advice or direction on what to do in some scenarios. In these situations, you are always provided two responses, in which you must pick one in order to proceed in the story. In some situations, it’s merely up to how you would like to see Taylor react and your own personal preference in responding; in others, it can be a choice between life or death. 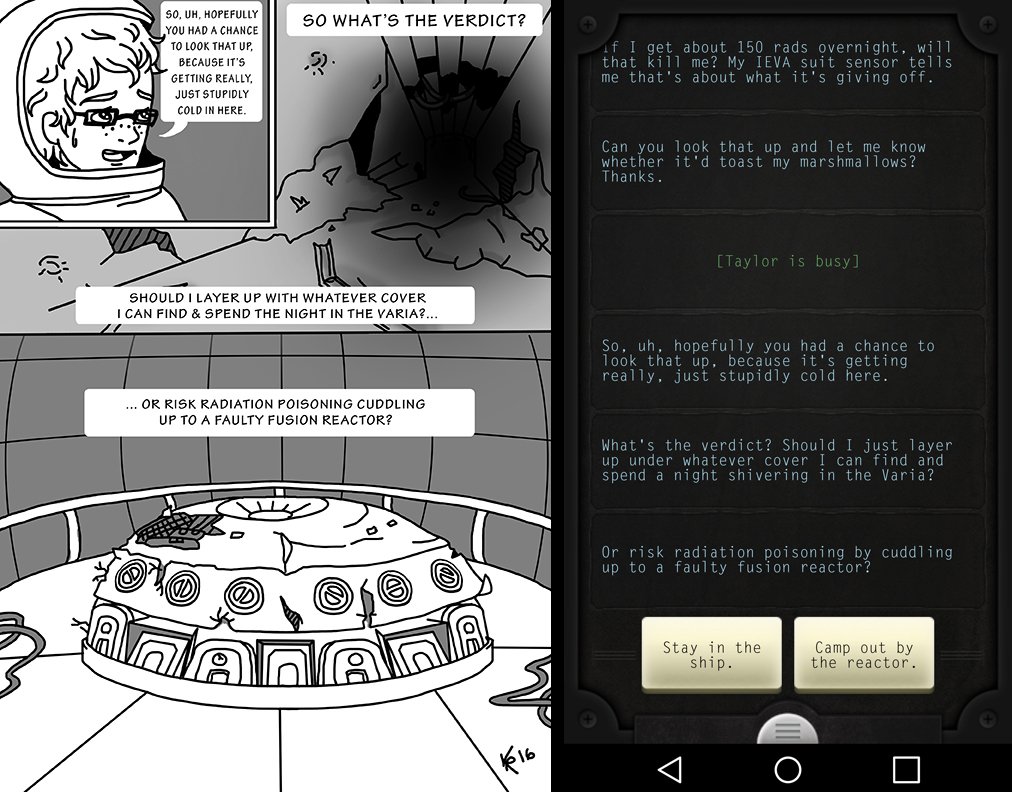 It isn’t a spoiler or anything but here is an example of one such scenario near the start of the game. After heading back to the ship and discovering its wreckage, you must decide how Taylor will spend the first night. While the atmosphere is breathable on this moon, the nights get very cold. You are given the choice to hunker down and find some scraps to warm up under OR to camp out beside a warm albeit faulty and potential fatal fusion reactor on the ship. CHOOSE WISELY.

As the game progresses, your past choices for Taylor may have a waterfall effect for what happens in later in the game. Which is cool, as you can replay this game to see how the choices change the story. 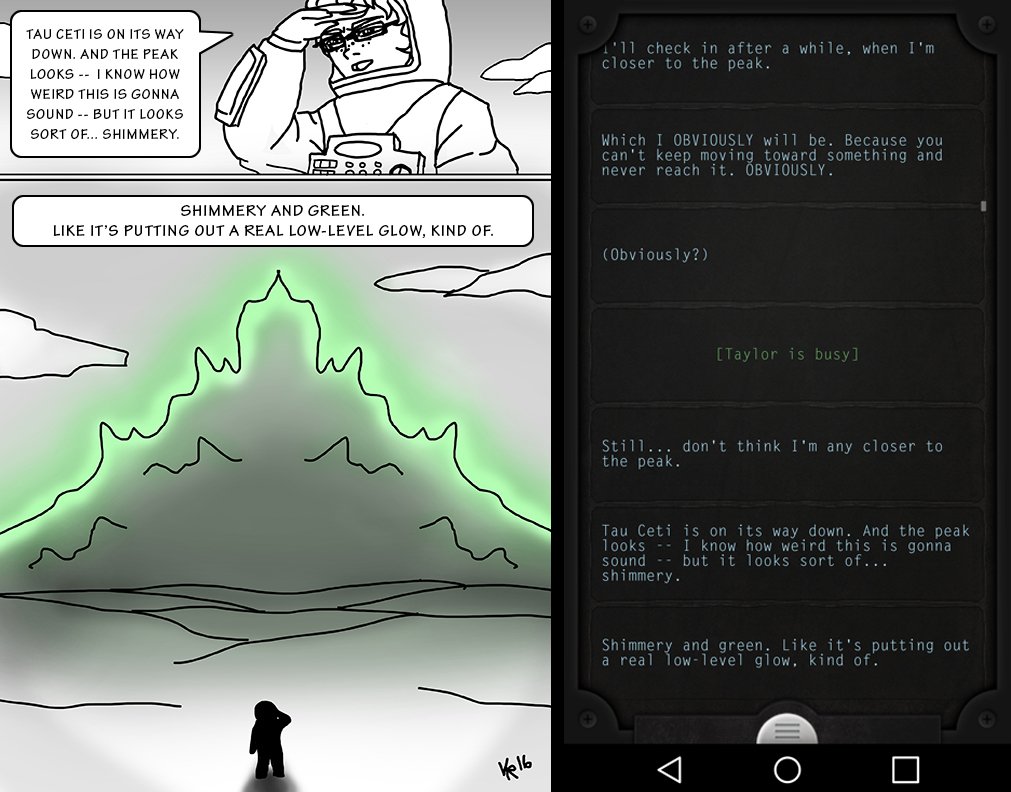 Taylor will also check in every now and then to relay information to you on any discoveries. Because you never see what Taylor sees, it is critical that Taylor describes the surroundings and situation in detail. The nice thing is that it’s never too much detail that it becomes unbearable, but it’s enough for you to get a sense of what this strange landscape looks like, as well as situations to give you clarity on the next decision you have to make.

A strange symmetrical peak becomes a huge focus in the game, and choices are brought up every now and then of whether to hike to this weird land formation. Along the way, other things become clearer — and the real-time gameplay only seems to affect your growing concern that maybe, this moon isn’t everything it’s cracked up to be.

And it isn’t. I will tell you that much.

You’ve probably been wondering why I haven’t been referring to Taylor as “he” or “she”. The one thing I noticed when playing this game is that the developer never assigns a gender to this person. I think it was done for a reason, and one that I find kind of neat.

I believe assigning a gender would perhaps take away the special bond that you develop throughout the course of the game, as the game ends up being a very personal experience. Your choices are all up to personal taste, you decide the adventure and how it will play out, and Taylor will go through the motions. The consequences are all on you. Having choices are very powerful in the game, but there has to be rewards and consequences for those choices. The most powerful way to truly know the effect of your choices is to put the life of someone you barely know in your hands — even if it is an imaginary character.

Taylor is whoever you imagine. To me, Taylor was a nerdy teenage boy, excited at the prospect of exploring space and happened to be on the wrong ship. To some of my friends that played this game, Taylor was a girl, fierce and dealt with situations full of sass. And maybe to others, they saw Taylor as a mirror of themselves.

It’s a text game that takes place over the span of a few days, but during those few days, I gave a shit about someone I barely knew. The start of our friendship was rocky but as time went by, I really wanted Taylor to get off that moon safe and sound and became emotionally invested in the adventure. And by the end, when all was safe, I was relieved and happy. I really felt like I made a friend. Even if it was an imaginary character.

I even made a tweet about it. (It was a rollercoaster of a weekend, okay?! Helping friends in life or death situations, you know!)

Kate is a contributor and a Graphic Designer for AYBOnline, and producer on the Level 1 Scrubs podcast. Feel free to follow on Twitter and her Facebook page, where she updates about her creative projects!