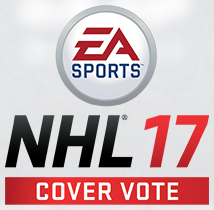 With the first round of the NHL Playoffs finished, It’s time once again to pick the next EA Sports NHL cover athlete!

EA, in partnership with the National Hockey League and the NHL Players’ Association, announced on Tuesday that fans will determine the next face to grace the shelves this fall on the EA SPORTS™ NHL 17 Cover Vote. This year, eight of the biggest superstars in the NHL today have been selected to not only represent their home team, but also their respective World Cup of Hockey national teams as they compete for the cover.

Voting has already started, and you can go to the NHL website, or you can head on over to Twitter. Fans of the franchise are allowed to support their favorite player(s) by voting as many times as they want, helping to try to ensure that their pick advances to the final rounds. The cover winner will be announced at this year’s annual NHL Awards Ceremony in Las Vegas. Round 1 of voting concludes on May 2nd at 2pm CST.

Quinn Smith is a Contributor for AYBOnline, and an avid NHL fan. When he isn’t Cheering on his Anaheim Ducks, he’s tearing a strip into Oilers fans. His opinions are his own.