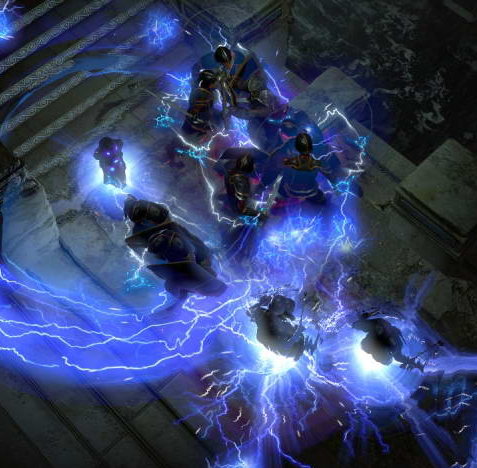 Apropos of nothing, I will now spend the next few hundred words gushing about Path of Exile.

You know Path of Exile. It’s the one that’s not Diablo III, that made a name for itself while Diablo III was still Real Money Auction Housing itself out of some fans. And then Diablo III Loot 2.0’ed itself back a whole bunch of fans. So, why Path of Exile?

Your skills in PoE aren’t tied to your class, they’re tied to the gems you pick up. Maybe a monster drops a Freezing Pulse or a Rain of Arrows gem when you kill it—that’s a skill! Pick it up, socket it in your stuff, now you can use it. And it levels up with you, increasing in effectiveness the more you use it.

Gems can be broken down into two types: Skill Gems, which give you active skills, and Support Gems, which modify Skill Gems. Most equipment has a number of red, green, and/or blue-coloured sockets that you can put gems of that colour in. Some of these sockets are linked together. If you have enough links, you can attach multiple Support Gems to a single Skill Gem. And when you do that, things get pretty crazy really quickly.

For example, I have a Witch, a class which is heavy on the elemental spellcasting. A friend gave me a Tabula Rasa, a unique item with six white links (white sockets can accept gems of any colour). So I’ve got the Freezing Pulse skill gem in there, supported by Faster Casting, Spell Echo, Lesser Multiple Projectiles, Increased Critical Strikes, and Power Charge on Critical. This all turns my Witch into an infinite shotgun blast of frozen hate.

Normally, I’d pump out a few Freezing Pulses a second straight ahead of me. With those Support Gems attached, I’ve got three per click coming out twice with every click, critting 88% of the time, and charging me up to get more crits with every hit. It’s ridiculous. I’m a boss from a bullet-hell shooter, dropped into an ARPG.

That enormous passive skill tree plays into this too. There are nodes that just give flat bonuses, and then keystone nodes which change the way you play. My Witch has the Eldritch Battery keystone, which takes one defensive stat and pours it into my mana instead. I’ve got another character, a Marauder, who thanks to a keystone called Resolute Technique can never miss—but the tradeoff is, he never crits either.

This is the appeal of Path of Exile. Most of the actual gameplay is grindy-yet-satisfying wholesale monster genocide—but the heart of the game, and all of the interesting choices, are in the meta-level character build strategy with which you approach that genocide. You wind up tuning your character into a death machine, hunting obsessively for drops that will complete your build and up your DPS. Do you want a Duelist so fast he can cross a map in seconds? Do you want a Templar who summons totems that connect up with fire beams and incinerate half the screen? A Marauder that bends half his passive skill choices up into the Templar tree, boosting up a nice little bit of fire magic along with his facesmashing? It’s all available to you. And it’s all pretty damn satisfying.

Developer Grinding Gear Games does a good job of keeping things fresh, too. On top of PvP, you’ve got Leagues, standard and hardcore, which rotate every few months or so and add a few new sub-rules to the game when you play with characters within those leagues. And you’ve got Races, which are limited-time slaughterfests in which you create a character and see how far you can get in a matter of hours. Finally, in the endgame, whole maps start dropping as items you can collect—and then open up and go and loot.

I mentioned earlier that another big twist with PoE are the currency items. Here’s the twist: there are no coins.

Instead, you buy things from vendors and other players using currency items. These range from Scrolls of Wisdom, which identify magic items you find, to Chaos Orbs, which reforge rare items with a new set of properties.

You can’t buy these currency items with real money. You can only get them from drops, or trading with other players. And they are each their own economy sink, making them a set of interesting choices all their own—do I use this Orb of Alchemy to turn this white item into a randomized rare, or do I save up a few to get a rare from another player that’s guaranteed to help my build?

Ultimately, what you end up with is Diablo III given the Neuromancer treatment; high-magic low-lifes wrecking loot piñatas until they pop, and carefully tuning themselves to ridiculous amounts of DPS and screen-filling spells while they chase braying mobs across a lush, ruined land.

Oh, and a quick twist I haven’t mentioned yet: you can take some of the RNG out of the game by leveling up Masters, and using crafting tables to add stats onto gear you find.

If you’ve been hankering for some Diablo that’s not Diablo, a gritty and visceral take on ARPGs, give Path of Exile a shot. Trust me, it’s worth it.

Jesse Mackenzie is the Managing Editor for aybonline.com. His new Scion can attack approximately a billion times a second. He can be reached at jessem@aybonline.com, and his opinions are his own.