Above Average: Why Video Game Characters Cannot Have Average Bodies 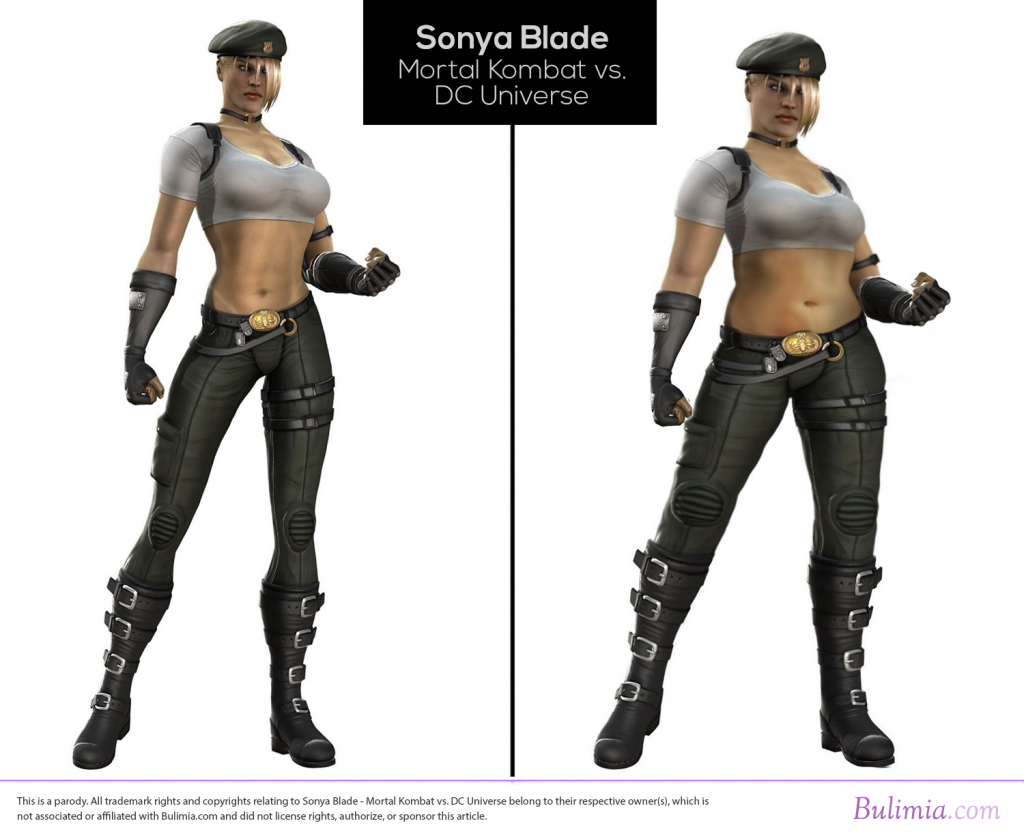 An article written by Bulimia.com is making waves over the body styling of female characters in video games. Ten notable female characters from a variety of video games have gotten the “Photoshop treatment”, but with a twist. They’ve been “reverse Photoshopped”. The likes of Lara Croft, Tifa Lockhart, and Cortana have all been edited and skewed into body proportions that “represent the average American woman’s measurements.”

While I absolutely do not contest that both eating and body image disorders are a serious issue in the world and should not be taken lightly, I have a desperate need to address what I feel are many flaws in their article.

Let’s start with their primary issue: How female characters’ bodies are styled and why they don’t fit the body proportions of the average American woman.
The most obvious statement is that these are fictional characters, not to be taken seriously and should be considered as art and not realistic portrayals of women. But average proportions of a geographical location does not equate to a fair, world-wide representation of healthy body proportions.
According to a study by the Center for Disease Control back in 2010, the average American woman is 5’4″ and weighs 166.2 lbs. While weight can be subjective based on muscle-to-fat ratios, it’s hard to ignore that 1 in every 3 Americans is considered obese, leaving me to conclude that this average woman weighing 166.2 lbs is not a body builder. This places them within a range that the World Health Organization classifies as “overweight”, which is hardly a shining example of a healthy woman.
Beyond that, the article fails to address the fact that most of the characters lead highly athletic lifestyles and therefore have athletically built bodies. Jade and Sonya should not be portrayed with the bodies of an average woman because that would be even more unrealistic. They are deserving of a body type similar to kick boxers and martial artists since they would have lean legs and narrow waists. These characters cannot be depicted as average women because they are simply not average. They are much more comparable to world-class athletes and fitness trainers, who generally condone healthy, active lifestyles.
From a digital standpoint, the styling of these characters seem fairly sound. So how about their dispute that these characters lack realism?
Thousands of cosplayers from around the globe have emulated these characters with pride and none of them, to my knowledge, have undergone any kind of surgery for any one particular character. While some of these characters are quite developed in the chest region, Rikku from Final Fantasy X-2 sports a very accurate example of an average breast size. There are also plenty of muscular, toned women in real life who have a large chest without going under the knife. And with movements spreading the word of “Cosplay is for everyone”, many women of all ages and all body types are gaining the confidence to dress up as these and many other female characters, regardless of a pudgy tummy or a small bust size.
I think most women who see these characters are not offended by their body, but empowered by their confidence and strength. Ask any girl who’s cosplayed Lara Croft from any of the games and I guarantee she sees her as a sexy, strong, intelligent woman that they wanted to embody and not as a weight loss goal. But you can go and search for many cosplays of these characters who look nearly identical to their digital counter part.
And what about the men? Why is this article strictly focused on female characters? The point they are trying to address is that these characters are not accurate depictions of average people, yet they failed to miss out on the much more drastic extreme experienced by our male counterparts. Where’s the picture of Kratos without his bulging biceps? Or Johnny Cage with a bit of a beer belly? There are plenty of male characters that could be considered a misrepresentation of the average male. And certainly men are also affected by eating and body image disorders. While the article suggests that young girl gamers could be develop a skewed image of what the female body should look like, could the same not be said for young male gamers as well?
I think the writers of this article took these fictional characters a little too far by skewing these characters into bodies that, while average, aren’t healthy or conducive of the lifestyle these characters have. While I do agree that maybe some might see these the body of these characters in a goal-oriented manner, the context in which they see them may not be all that bad. If a young, teenage girl picks up a copy of Tomb Raider and sees her climbing mountains, why shouldn’t she be inspired to take up rock climbing? But I don’t think the issue is with the character design either if she thinks restricting her food intake or getting breast implants to look like Lara Croft is a good idea.
The article by Bulimia.com is very narrow-minded, in order to increase shock value. I’m thankful that other writers, like myself, are coming forward to share that character design is not something to be feared and that there are very valid reasons why someone like Sonya Blade does not and can not fit the mold of the average American woman.
J. Tanooki is a Contributor for aybonline.com. She has been a lover of cosplay for over 10 years and regularly works on new and exciting cosplay projects. She actively posts about her cosplay plans, progress, and random shenanigans on her Facebook page, Twitter, and Instagram. Her opinion is her own.
Cortana Cosplay Cosplay Corner Cosplay Is For Everyone Lara Croft Rikku Sonya Blade