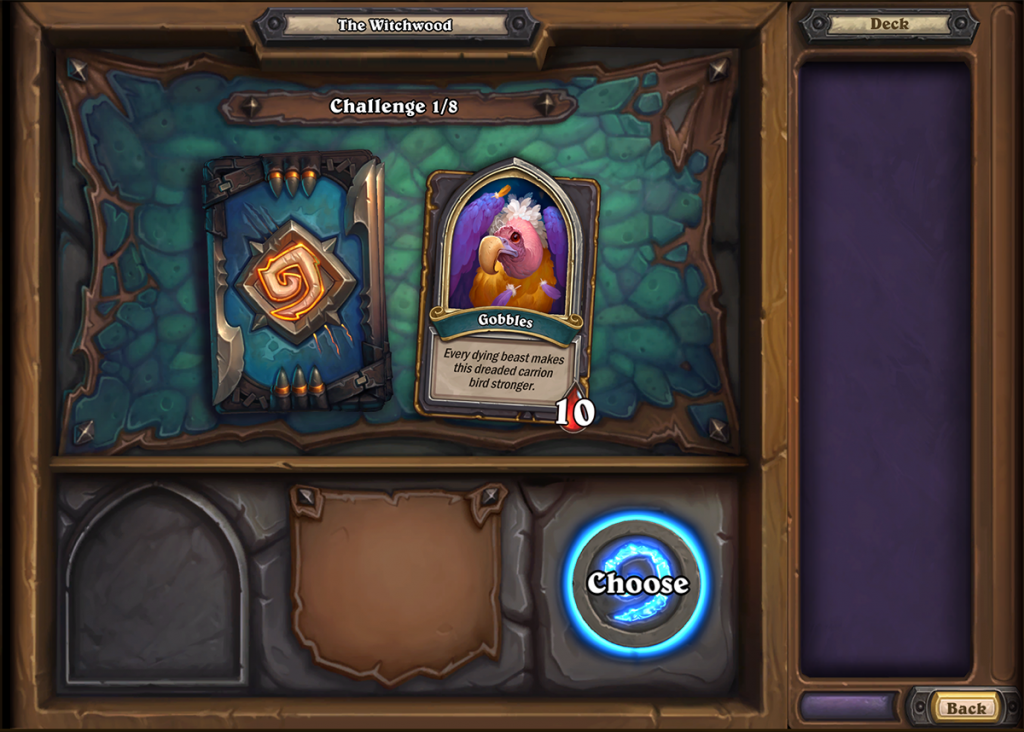 For a limited time, players can log in to Hearthstone to claim three free packs and a class Legendary card

April 12, 2018—The hunt is on as Hearthstone® players set out to lift the malevolent curse twisting The Witchwood™, the newest expansion for Blizzard Entertainment’s smash-hit digital card game. The Witchwood unleashes 135 hair-raising new cards and marks the beginning of a new Hearthstone Year: The Year of the Raven.

A vile magic has taken root in the woods surrounding the city of Gilneas, and the lycanthropic townspeople ready themselves for a showdown with whatever lurks in the dark heart of the forest. As players venture deep into The Witchwood, they’ll encounter uncanny new cards and gameplay mechanics, such as the eerie new Echo keyword. Echo cards can be cast multiple times in a turn, as long as players have enough mana to pay the price. In addition, rumors tell of two powerful Legendary minions—Baku the Mooneater and Genn Greymane—that present grizzled deck-builders with a unique challenge: use only odd- or even-cost cards in exchange for a game-changing Hero Power boost.

“The Witchwood brings a spooky Azeroth fairytale to life in a uniquely Hearthstoneway,” said Mike Morhaime, CEO and cofounder of Blizzard Entertainment. “We can’t wait to see players sink their teeth into all the new cards and start shifting their deck-building strategies around Echo and the other new mechanics.”

In two weeks, the adventure will continue with the addition of Monster Hunt, a free new single-player mode that will take players into the forest to strike at the source of The Witchwood’s wicked curse. Stay tuned for further details about Monster Hunt very soon.

Today also marks the beginning of the new Hearthstone Year—The Year of the Raven. Each Hearthstone Year ushers in a fresh set of cards for the Standard competitive format, drastically changing the established meta and leading to more exploration and variety in deck types. With this change, the Whispers of the Old Gods™, One Night in Karazhan™, and Mean Streets of Gadgetzan™ card sets will become playable exclusively in the Wild format, where players are able to draw from every set released to date for Hearthstone.

The Witchwood is available now for Windows® and Mac® PCs; Windows, iOS, and Android™ tablets; and iOS and Android phones. Card packs can be purchased individually or in discounted bundles from the in-game Shop for gold or real-world currency at the same price as all other Hearthstone card packs. Players now have the chance to win The Witchwood card packs as quest rewards or prizes in the Arena, and can also craft cards from the expansion by using Arcane Dust collected from disenchanting unwanted cards.

For a limited time, players who log in to Hearthstone will receive three  The Witchwood  card packs and a free random Legendary card for one of the game’s nine Hero classes in celebration of the expansion’s launch.

Visit TheWitchwood.com to learn more about the expansion and prepare for the hunt.