GoodGame Empire Up and Running on aybonline.com 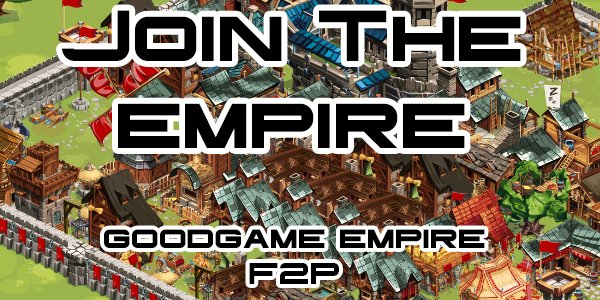 If you are not already aware, there is a game available to play right on the AYBOnline webpage called ‘Empire’ by GoodGame Studios. Empire won the 2013 ‘game of the year’ for its category and you can definitely see why, it follows the standard ‘facebook’ style time frames to build your castles and is of course free to play, although you can purchase ‘rubies’ in order to speed things up a bit but also build some amazing bonuses that give you an edge.

The game has a great flow but does have a slight learning curve, this can of course be bypassed by joining an alliance and asking people who have been playing since the games inception. The graphics are in the cartoon style which at first is a little distracting but you definitely get used to it and don’t even notice it after a while. I personally do not like this look so I may be biased in my opinion. There are 3 ‘lands’ within the game, two of which you can get to at higher levels so you want to make sure you branch out as soon as you can to these new areas.

Pro’s for the game would be its cheap cost to buy rubies if you want to invest in better buildings. The different ways you can attack a castle (left, right and center flanks) and all the extra equipment you can bring to take down the castle during a siege. The huge following is also great because you will definitely have questions about how things work a few days in. The daily rotation of ‘bonus’ options is also another thing that is great. You can spend gold to purchase mercenaries which definitely make your army stronger, but i don’t want to give away all the surprises.

Con’s for the game would be the ability to buy more ‘building’ slots but they act more like a queue rather than building at the same time. The most obvious con is the fact that the game has such a steep learning curve which causes people who are just quick players to lose interest really fast.

Please click the link at the top of the page and join in the fight!