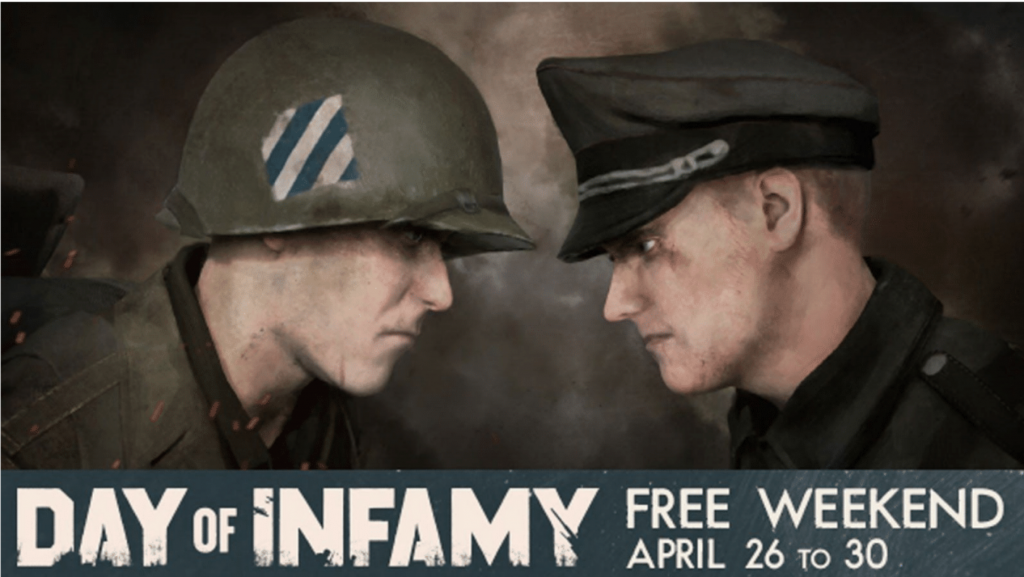 After 2.7 Billion rounds fired, in 4.8 million matches and over 236 million kills, Day of Infamy is looking for new recruits with its upcoming Steam Free Weekend!

New World Interactive, the developers of the 5.5 million-selling indie hit Insurgency and upcoming sequel Insurgency: Sandstorm, invite all gamers to come celebrate with the team on Thursday, April 26 at 1 p.m. EDT, for the start of the Free Weekend! The promotion will last until April 30 at 1 p.m. EDT. The celebration will be accompanied by a Steam sale that will last all weekend at $5.99 (70% off). Gamers can also expect a triple XP boost to reward long-time players and get new players off to a quick start.

The developers will also be kicking off the Free Weekend by hosting a livestream on Twitch.tv/NewWorld on Thursday, April 26 at Noon EDT, to help celebrate with a live Q&A, game giveaways and an opportunity to play with some members of the team. Fans are encouraged to stay tuned to Day of Infamy’s Twitter and Facebook account for more information.

Players that are new to Day of Infamy can expect to experience hardcore World War II first-person shooter combat in both player versus player and cooperative game modes, with an emphasis on teamwork-oriented objectives and high-lethality gunplay. Call in fire support, secure objectives, and push the line forward using more than 60 iconic WWII weapons, nine specialized player classes and 33 historic units of the US Army, British Commonwealth, and German Wehrmacht.

About Day of Infamy

Day of Infamy started in 2015 as a mod for the Steam Top Seller Insurgency, created by the developers at New World and members of their modding community. Since then, New World has worked hard to stay true to their design roots, established by Insurgency, but also shaped Day of Infamy into a unique World War II shooter that can stand on its own. To date the game has sold over 500,000 copies and has led the WWII shooter revival. The game was also praised by influential independent gaming community site ModDB, winning their 2017 Community Awardand placing 3rd in Indie of the Year fan voting.

Day of Infamy is available for purchase on Steam, The Humble Store, and a variety of other digital PC game retailers.