Racing games have always held a special place in my heart. I can’t remember a time where I wasn’t a fan of the genre. I’ve spent an ungodly amount of hours ripping through the streets of Burnout Paradise, Grid Autosport or any number of the vast series of Need For Speed games. And I can’t tell you how much seat time I’ve spent on the real-world race tracks in Gran Tourismo, Forza, and Assetto Corsa.

Project Cars has been my latest catalyst for my love affair with tarmac, largely due to its support for virtual reality. Project Cars launched roughly a year ago, but in April, it was taken to a whole new level of realism when it became an Oculus Rift launch title. Racing in VR is truly amazing, though it’s definitely not for those with weak stomachs.

I, myself, am an avid racing fan. I’ve played countless hours of racing games, always in the first person view. Long before cockpit view was a thing, I always chose bumper or hood view (If you take racing games seriously, you likely don’t use the chase cam either). My experience with cockpit view racing definitely helped prepare me for VR, but the experience is still very intense. Racing in VR puts you right in the middle of the action, and the sense of speed really gets your adrenaline pumping. I can definitely see why the experience is overwhelming for many people.

It doesn’t help if you aren’t a good driver. Spinning your car out on the track at high speeds can definitely be jarring. If you are used to racing recklessly and crashing often, you might want to practice some disciplined driving before donning a VR HMD.

The experience is also heightened to new levels if you happen to include a racing wheel peripheral. This is an expensive toy for the casual gamer, but if you take racing games as seriously as I do, a wheel is a must have addition to your racing setup. With virtual reality, that adage is even truer. There’s something magical about turning the wheel in physical space and having it match what’s going on in the game. It does wonders to sell the realism of the experience to your brain. A gamepad is a big disconnect from the reality of driving a car and it makes a big difference when you play. 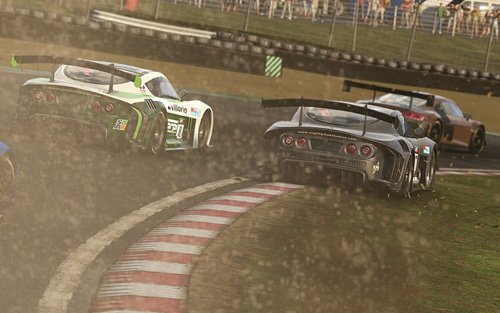 I happen to have a wheel of my own, and AYBOnline has had a racing wheel for two years that we use in the Demo Zone at BaseLAN events. I also happen to have an Oculus Rift and an HTC Vive in my house right now, so I decided to capitalize on the available hardware. Last week I had a good friend of mine, who also happens to be an avid racing game fan, come over to play some multiplayer VR racing. We knew the experience would be amazing, but I honestly wasn’t ready for how incredible it was.

The plan wasn’t without problems. We learned the hard way that the Oculus Store copy of Project Cars isn’t compatible with the Steam version of the game. Oculus and Steam’s networks don’t talk to each other, so you have to have to copies of the game on Steam. Fortunately, SteamVR isn’t locked down to just the Vive HMD, so we had no trouble getting the Rift to work with the game. We just had to buy another copy (grumble, grumble).

After sorting out the compatibility issue, we were up and running within minutes. The game just works in VR. Slightly Mad Studios did a great deal of work to ensure that menu navigation is smooth and comfortable and when SteamVR is running, the game preconfigures itself for maximized frame rate performance. The resolution settings were lower than we expected at 720p, but the game is rather demanding and keeping a constant 90fps framerate is of paramount concern when playing a VR game. Anything less can prove to be barf-city—especially in experiences where the scenery is moving fast.

With performance concerns behind us, we proceeded to start up a race. Hosting a new multiplayer match is very simple, but it’s not as easy to find the hosted match. We weren’t able to locate my match on the in-game match list. Steam friends came to the rescue, though. Clicking on join game from the friends list got us directly into the match. We didn’t know it yet, but we were in for one of the best thrills of our lives.

If this were a racing game on the Xbox One, we’d both be starting with ridiculous hypercars or racecars, and we’d be settling for nothing less than the Nurburgring Nordschleife to battle it out. Being our first attempt at multiplayer VR racing, we decided to tone it down a little bit. We started with a somewhat less insane racetrack, SPA Francorchamps, and we started with B class road cars. This was probably a wise choice. The sense of speed in virtual reality is magnitudes stronger than when you play on a flat screen. Even racing with three screens is nothing by comparison. After the first race, the two of us took a moment to collect ourselves. The adrenaline rush was like nothing I’ve ever felt while playing a video game.

Next, we stepped up to some hypercars. I chose a Mclaren P1 and my friend grabbed a Pagani Huyara. The P1 proved to be a serious handful, but it was an epic wild ride. We also decided to step up to the plate and try our luck on the Nordschleife, which may have been the cause of my downfall in that race.

After that race, we went back to SPA, but this time, we chose formula 1 cars. These things were absolutely mental and they left us both giggling uncontrollably at the end of the race. The sense of speed is beyond my ability to describe it. It was absolutely mental.

Because I’m a sucker for punishment, the next race was with the same cars but back on the ‘Ring. Holy CRAP was that fast and mind bending. The Nurburgring, if you aren’t familiar, is the longest race track on the planet. It takes the fastest cars in the world nearly seven minutes to complete a single lap, and there are over 100 bends and turns throughout the course. We were barreling down the track at ungodly speeds. The trees were ripping past at such an alarming rate that it made my heart pump hard enough that I became conscious of its rhythm.

The feeling of that race is so hard to put into words that I’m not even going to try. I’ve simply never had that much fun with a racing game ever before.

I definitely plan to hold many more VR racing nights in the future. That experience was just too good to not go back to. I definitely want to share this experience with others, so we’ll likely have a VR racing rig setup for the next BaseLAN event this fall. Stay tuned here for details as we get closer to the event.