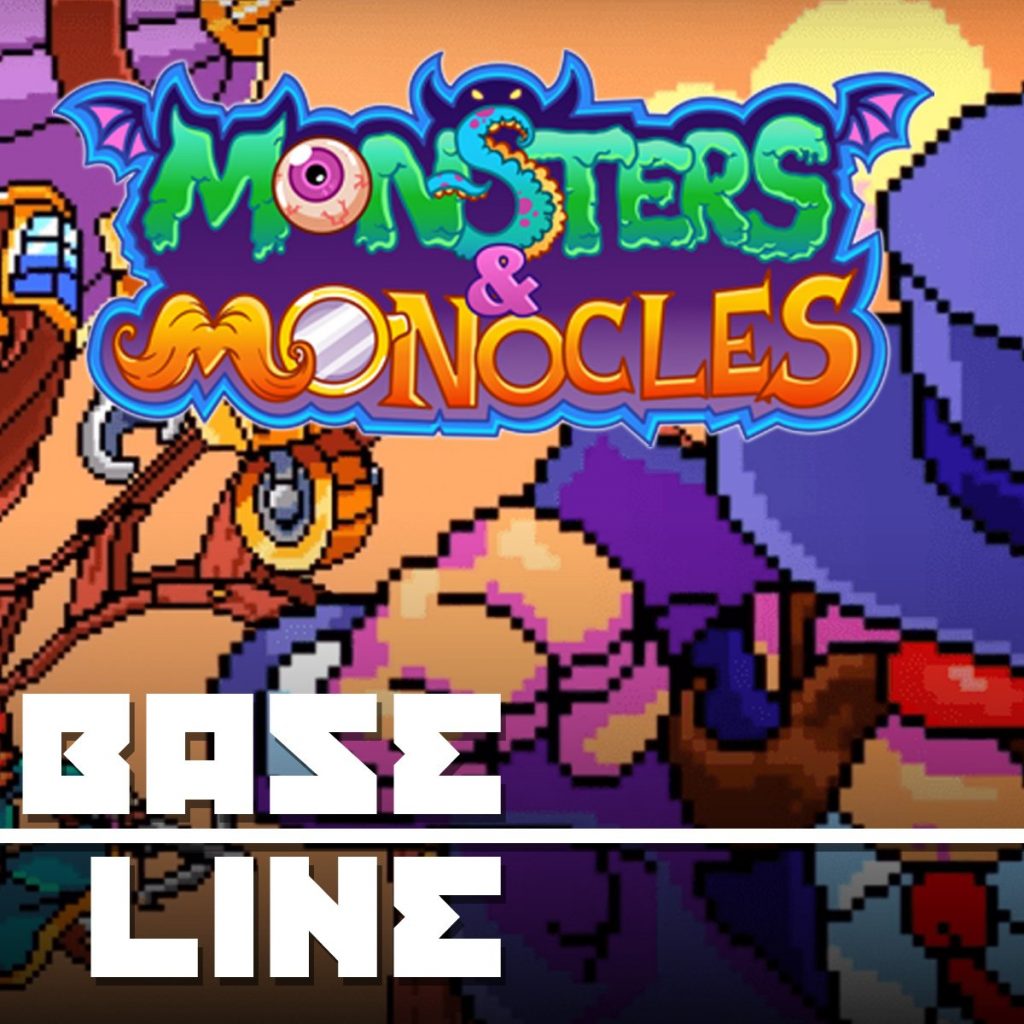 Haunted mansions, foggy London streets, and sandy deserts are just a few of the locals to wreak havoc on evil monstrous hoards in Monsters and Monocles. This game looks every bit as good as other entries in the genre. With its on point steampunk pixel art, great selection of weapons and power-ups, and an awesome amount of monster variety; this game should be the latest and greatest in top down roguelikes. But it’s not quite there…yet. 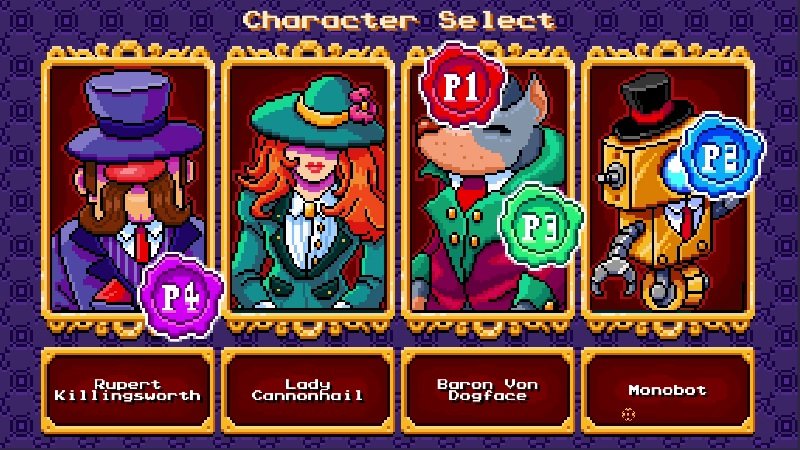 In Monsters and Monocles, players can take on the forces of evil using one of four creative and colorful monster hunters known as Rupert Killingsworth, Lady Cannonhail, Baron Von Dogface, and Monobot. With awesome names like that I wish I could use the word unique to describe them also, but unfortunately once you get past their delightful sprite art, you are left with the same character four times over.

The game is set to handle 1-4 players, but it doesn’t really matter who you pick because they all play exactly the same and the art only exists to tell each player apart from each other. This is a part of the build that I am truly hoping that they update before the full release game. Having each of the four characters actually have different abilities or stats would really help in making the game feel unique and more diverse.

It would really be amazing for each character to have something special that set them apart especially because of how interesting each character looks. One of the characters is a dog so why not have him move faster, or maybe have a faster dash recharge. Lady Cannonhail could have a faster shooting speed than everyone, or maybe she could have three gun slots instead of the standard two. I feel like simple little tweaks like this would really give the game more life.

Honestly, with that issue aside, the game really does look and play great. This feels like an instant classic while you’re playing it. I was having flashbacks to my Zombies Ate my Neighbors days on my Super Nintendo.  The game does a great job of making each environment available so far feel different and unique. Each level is procedurally generated so every time you enter a level it feels new in one way or another. But as with all procedurally generated games, this will sometimes make the flow of the level a little odd and leave some spaces overcrowded with baddies or some rooms and corners completely empty and pointless.

Luckily speed and mobility aren’t a problem so dead ends and crowded rooms won’t slow the pace of the game too much. I enjoyed the fact that every time I entered a level, it was a random objective rather than just kill everything and exit over there. Also, each level is split up into two floors and then a boss fight. I like the idea of the in-between floors being a store that you can purchase weapons and health at, but most of the time the weapons are only slightly more powerful than what I have and health can be found in the levels while playing so I rarely did any shopping. I did really enjoy the variety of the boss monsters in each level. I feel like the first boss is a little overpowered compared to the second and third, but those are simple balance issues that can certainly be corrected before release.

Monsters and Monocles gives a consistent shooter experience with solid controls and a great variety of things to kill. The shooting mechanic is simple and involves a heat meter instead of having an ammo counter. While I do like not having to count my bullets, the heat meter can be a little counter-intuitive at times because your gun overheats the more you fire it and then it has to cool down before firing again.

Now that makes sense, but as you upgrade your abilities, you can fire your guns faster and faster to hand out more damage, but this also causes your gun to overheat way faster. This causes some guns to actually become less useful as you become more powerful. But I’m certain they will have some kind of upgrade or ability to allow for shorter cooldown times or something to that effect.

Some of the guns in the game can also feel a little too similar sometimes, but again, for a game that has a lot of guns in it, this isn’t too much of a problem as I found myself quickly finding a couple favorite weapons that I always kept at my side. Aside from the firearms, players are also able to use a dash maneuver to dodge enemy fire, but I honestly found the recharge time to be so slow that I barely used it so I hope they correct this in a later build.

So as it stands, Monsters and Monocles doesn’t break any shootermolds, but it definitely has some strengths and nostalgia on its side. The graphics are gorgeous and it truly feels like an old school shooter classic. The procedurally generated levels allow for a lot of replay-ability and the variety of monsters and bosses keep the game engaging and fun. Player characters look great but lack unique powers that would really add extra depth and strategy to the gameplay especially during multiplayer sessions. There’s also a hand full of balancing issues and tweaks, but for an early access title these are fairly minimal and I feel like this will be a solid title with your cash when it hits full release.